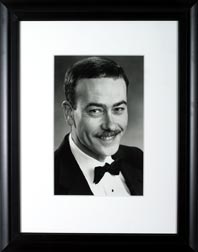 Michael Farris (1957-1999) was an Eastman alumnus and associate professor of organ from 1994 until his untimely death. Born in New Mexico, he received his undergraduate degree from Southern Methodist University and then continued his studies at Indiana University where he earned a master of music degree and a Performer’s Certificate. At Eastman, under the tutelage of Russell Saunders, he achieved not only a doctor of musical arts degree and a Performer’s Certificate, but also Eastman’s highest honor, the Artist’s Diploma. His success at all three schools was highlighted by winning three national performance competitions including the MTNA Collegiate Artists Competition in 1976, the Ft. Wayne Competition in 1985, and the National Young Artist Competition of the American Guild of Organists in 1986. After completing his doctoral studies he chaired the organ department at the University of Illinois, Urbana-Champaign, where he was honored with a University Scholar Award in 1993. Later that year, he came to Eastman as a visiting associate professor and then joined the faculty on a permanent basis in 1994. Cited by The New York Times as “an organist of unusual brilliance and versatility,” Farris was highly regarded as an educator and much loved by his students at Eastman.