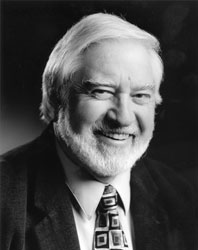 Roy Ernst, professor emeritus of music education, taught at Eastman for 25 years and chaired the music education department for 12 years. In 1991, Dr. Ernst started the first New Horizons Band at Eastman for the purpose of creating a model program emphasizing entry and reentry points to music making for older adults. Later, he became the founding director of the New Horizons Music Project, funded by the National Association of Music Merchants and the National Association of Band Instrument Manufacturers. In that capacity, he used the New Horizons Band as a model to assist in starting more than 60 similar programs in the United States and Canada. Born in 1938 in Troy, Michigan, Dr. Ernst received his BS and MS degrees from Wayne State University, and a PhD from the University of Michigan. He began his teaching career in elementary and secondary schools in Michigan, and was part of the performance faculty of Wayne State University from 1964-1968. In 1971, he was appointed assistant professor of music at Georgia State University, Atlanta, where he became chairman of the wind department and conductor of their wind ensemble. In 1984, he was a visiting professor at the Sydney Conservatorium of Music in Sydney, Australia. Dr. Ernst’s honors include the President’s Arts Achievement Award from his alma mater; an Outstanding Educator Award from the Rochester Philharmonic Orchestra; the Richard Snook Educator Award from the Monroe County Music Educators; and recognition as a Grand Master of Music Education by the Music Educators National Conference. Dr. Ernst has published books and articles on conducting, flute performance, and music education, and is founding director of The Aesthetic Education Institute in Rochester, New York. He conducts frequently at New Horizons Institutes: national and international events for New Horizons Band and orchestra members.