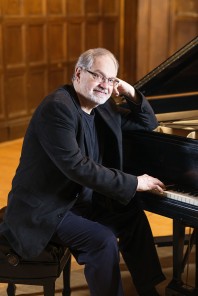 Harold Danko is associated with such jazz legends as Chet Baker, Gerry Mulligan, Thad Jones/Mel Lewis, Lee Konitz, and Woody Herman, in performances at major jazz venues throughout the world as a band leader, composer, and solo pianist.

Beginning his piano studies at the age of five, Harold became serious about pursuing a career in jazz at the age of fifteen, when he commenced studies with Gene Rush in Youngstown, Ohio. After graduation from Youngstown State University and a stint in the United States Army Band, Harold landed the piano chair in Woody Herman’s Thundering Herd, which launched his career as a much sought-after jazz musician. He also developed a reputation as a respected jazz educator in New York City and throughout the world.

Professor Danko joined the Eastman faculty in 1998 and served as Jazz Studies Chair from 2002 to 2011, retiring in 2017.  Prior to his appointment at Eastman, he served on the faculties of the Manhattan School of Music, the New School/Mannes, Hartt College, and other institutions.  At Eastman he taught jazz piano, directed the Jazz Performance Workshops, and headed the Eastman Jazz Trio and Quartet.  In 2007 he received a Bridging Fellowship to do research in the University of Rochester Linguistics Department on the relationship of speech and music.

As a leader he has been featured at the Rochester International Jazz Festival, Lincoln Center’s “Meet the Artist” series, Washington DC Performing Arts Society series at the Kennedy Center, and numerous jazz festivals in the United States and abroad.  Throughout the 1990s, he performed with and composed for a quartet including Rich Perry (tenor saxophone), Scott Colley (bass), and Jeff Hirshfield (drums), and in 1995 received an NEA Fellowship to perform his own works in a series of concerts in New York City. Harold has won ASCAP Awards yearly since the early 1980s for the value of his catalog of original compositions.