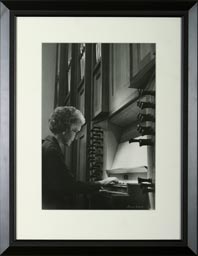 Called “an internationally renowned teacher and one of the most highly regarded organists of our time” by the Cleveland Plain Dealer, Catherine Crozier studied organ at Eastman with Harold Gleason. Born in 1914, she earned her bachelor’s degree in 1936 and master’s degree in 1941, as well as both the Performer’s Certificate and the prestigious Artist’s Diploma. She joined the faculty in 1939, eventually becoming chair of the organ department. Since her debut at the American Guild of Organists National Convention in 1941, she has concertized across the United States, Canada, and Europe in solo recitals and with orchestras, including the New York Philharmonic, the Rochester Philharmonic Orchestra, and the Musica Aeterna Orchestra of New York. In 1962, she was among three organists selected to play at the inaugural organ recital in Lincoln Center’s Avery Fisher Hall. In an era when women were not often invited to perform, she opened the field by playing more skillfully and eloquently than many of her male peers. A beloved teacher, meticulous scholar, and international adjudicator, Ms. Crozier gained a reputation for championing the works of modern composers, often consulting them for interpretation. She is the recipient of numerous honors, including the 1979 International Performer of the Year Award (given by the New York City Chapter of the American Guild of Organists), Eastman’s Alumni Achievement Award, and the University of Rochester’s Citation to Alumni. She holds honorary doctoral degrees from Smith College, Baldwin-Wallace College, University of Southern Colorado, and Illinois College. At Eastman’s Alumni Weekend 2000, Ms. Crozier also received an honorary doctorate from her alma mater in recognition of her distinguished career as a virtuoso, teacher, and scholar. Catherine Crozier died in 2003 in Portland, Oregon, at the age of 89.