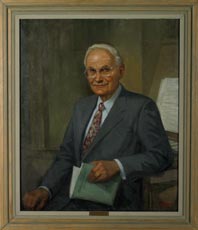 Born in 1924, David Craighead, professor emeritus of organ and former chair of the Eastman organ division of the keyboard department, received a bachelor’s degree from the Curtis Institute of Music in Philadelphia. In his last year at Curtis, Mr. Craighead joined the faculty of the Westminster Choir College in Princeton, New Jersey. Following his graduation from Curtis, he taught in the music department of Occidental College in Los Angeles. During his 37 years as a professor at Eastman, Mr. Craighead balanced his impressive career between performing and teaching. He has presented recitals throughout the United States and in England, and has been a featured performer at national conventions of the American Guild of Organists. David Craighead died in March 2012.