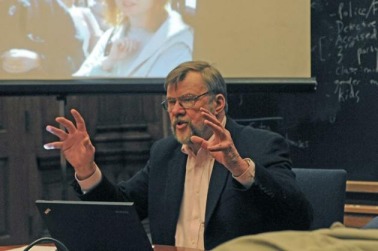 ERIN V. LEHMAN, Ph.D. is a Team Leader at Boston Adventures, a corporate events company specializing in customized teambuilding programs and outings. Prior to this, Dr. Lehman worked for the Organization Practice at McKinsey & Company in Washington, D.C. and spent 20 years working with Professor J. Richard Hackman, in the Department of Psychology at Harvard University, at the John F. Kennedy School of Government, and at the Harvard Graduate School of Business Administration.

Her research, publications, and professional interests center on leadership and teamwork, especially in self-governing and senior leadership teams. Dr. Lehman received a Bachelors degree in economics from Wellesley College and a Ph.D. in organizational behavior from City University in London, England.

OK I found it - Trombone thanks

I met Erin Lehman and Richard Hackman back in the mid-90s when they brought their research to ROPA conferences. I remember having a long talk with Richard in Ottawa at the second “Unity” conference, about the future of orchestras and what we could do to change the culture. When Erin sent me word that Richard had passed away on January 8, 2013, I asked her to write a memorial for Polyphonic, explaining why he was so important and so revered in the orchestra world. Richard’s Harvard colleagues have put up a memorial website: www.jrichardhackman.com