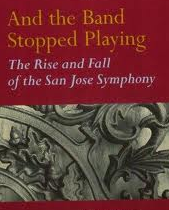 Cheryl Fippen was a cellist with the San Jose Symphony and is now a member of the Silicon Valley Symphony. She is a past Vice President of ROPA.

All posts from Cheryl Fippin
0

This 2005 book contains many pertinent questions and conclusions about the history and eventual demise of the San Jose Symphony (SJS). It provides an interesting introduction, detailing the formation of the SJS and comparing it with the start of orchestras in other cities around the country. There are curious statistics, such as those describing a population with a higher than average education and a higher than average interest in classical music – that prefers to listen to music in their cars! And of course, the book chronicles the many leadership failures, both administrative and artistic, the inappropriate programs and poor concert halls, and a musicians’ union contract that was out of touch with the underlying revenues and deficits of the organization. All of these points have merit and surely led in some degree to the bankruptcy of the San Jose Symphony.

However, the book also understates or omits other factors that should be more closely examined. Appendix A lists a myriad of competing classical music organizations, yet does not name them. Five professional symphonies in Silicon Valley alone? And four chamber orchestras? And while we’re exploring numbers, the 641 individuals surveyed online about their classical consumer preferences seems a very small sample from which to draw such far-reaching conclusions.

Wolf and Glaze state that the growth of the orchestra in the 70s included an endowment. While a Foundation existed to manage and grow an endowment, it was not part of the SJS, and no sizable amount of money was ever available to fund operations. The SJS never had an endowment, such as all successful orchestras do, and thus was subject to the yearly vagaries of the fundraising climate. Lack of planning for an endowment was a major factor in the collapse of the SJS.

In the Budgets and Financial Controls chapter of the book, the authors fail to connect the decline in ticket sales between 1999 and 2001 with the dot.com bust. While the organization should obviously have made budget revisions based on the reality of the market place, it should be noted that the entire Valley was reeling from a precipitous drop in the economy. And in the next paragraph about sold services, nothing is mentioned about the fact that the SJS initiated the break with the Ballet so that those services could be used for community outreach – something that funders were calling for at the time. (These same funders then rejected the community efforts of the SJS.) Without the income from sold services, and with no foundation support to fill the gap, the SJS fell into even more perilous financial straits.

Much is made about the mismatch between our highly trained and touted conductor and the community he failed to serve. An assumption is made that if he had interacted better with the community, both in programming and outreach, that all would have been well. Nothing is said of the artistic mismatch with the orchestra itself, and although this is a delicate matter, the artistic leadership was lacking both onstage and off. If a lesson is to be learned, it is that a vibrant relationship between the conductor and a community grows from the creativity and integrity of performances.

Regarding authors Wolf and Glaze: mention must be made of the clear conflict of interest that underlies this book. The David and Lucille Packard Foundation, who funded the research for this book, had been a significant funder of the San Jose Symphony for many years, but at some point in the 1990s they stopped being supportive. Not only did this deprive the SJS of important resources, but it poisoned the entire fundraising climate for the orchestra. Surely the Foundation and Nancy Glaze, its Director of Arts, knew exactly what the consequences would be, and this book conveniently justifies their inaction. By sponsoring Mr. Wolf to write this book, a gentleman who specializes in writing about failed symphonic orchestras, one has to ask if his conclusions are truly objective, or skewed to substantiate the clear bias of his co-author and patron.

And the Band Stopped Playing proposes to analyze the decline and death of the San Jose Symphony. Although the focus is confined to one city and its orchestra, the lessons to be learned from the autopsy no doubt ring true for many other orchestras. In fact, many of the principles presented in this study apply to many types of arts organizations and to non-profits in general.

My interest in this book arises not from an abstract vantage point but as one who is deeply involved in trying to bring stability, growth and success to a local/ regional orchestra that in many ways is not dissimilar from San Jose. Given that my engagement is one that does not grow out of a lifelong or professional involvement in the field, books such as this one provide an extremely useful tool for understanding the dynamics that currently are impacting symphony orchestras in the United States.

It may be trite, but it is nevertheless true that it is much less painful to learn from the mistakes of others than to suffer them yourself. This book provides that opportunity to those who will invest a small amount of time in reading it. Less than 100 pages (including appendices), the authors of the study manage to provide a great deal of substance organized in a highly logical structure. Merely reading the Executive Summary and reviewing the Contents provides the reader with a clear view of the areas of inquiry and topics that define the salient points of the study.

Enough background and history are provided to ground the reader without being overwhelming. This provides a foundation for understanding the milieu in which the San Jose Symphony operated and eventually failed. The book itself is organized along broad themes that allow a reader to both understand and contemplate the issues at play. Woven through the narrative one finds both the broad issues and narrow strategies that the industry in general faces, and that the San Jose Symphony employed.

I believe that many if not most trustees of orchestras, as well as other stakeholders, will find this book unnerving, in that these concerns and indeed the responses of the SJS will hit uncomfortably close to home. Even more disconcerting (no pun intended) is that, although the problems and responses are thoroughly set and analyzed to the point of clearly highlighting where and what mistakes were made, no readily apparent answers appear. In point of fact, the more frightening aspect of the study is that, despite the claim by the authors of Advice (Part IV) and Lessons Learned (Part V), there is no clear path illuminated that will necessarily lead toward health and stability for similarly-situated organizations.

In my own case I was left with the feeling that many of the causes of the demise of the SJS were close to unsolvable without the entire “symphonic industry” undergoing what might be called revolutionary change. One justifiable conclusion is that the 19th century model of the relationship between a community and an orchestra has limited applicability in 21st century America. It is impossible to avoid the notion that basic change in how orchestras see themselves is essential, including the necessity of various constituencies to embrace new ideas in everything from compensation models to the roles orchestras need to fill in the communities in which they exist.

While I strongly recommend that And the Band Stopped Playing be required reading for anyone interested in the viability of orchestras in the United States, I would be remiss if I did not point out that my reaction to the book includes a small sense of disquiet, in that I couldn’t help but get the sense that the authors were not completely dispassionate and disinterested in their approach to the study. There is a hint of defensiveness vis-à-vis the actions and impact of the Packard Foundation, which not only funded the study but also was one of the key supporters of the SJS from 1973 to 2000. In no way do I mean to suggest the study is not honest, complete or meaningful, but I think one must approach the analysis understanding the underlying relationships.

Nevertheless, in the end I believe the study to be extremely valuable. It sets out markers against which orchestras can measure themselves, and raises questions any symphony orchestra organization must ask itself. As unpleasant as it is to see the results of an autopsy of an organization such as the SJS, it certainly is better than ignoring the causes of death only to have the next post-mortem performed on one’s own orchestra.

David Roth is the President of the Board of the Hartford Symphony Orchestra.

And The Band Stopped Playing: The Rise and Fall of the San Jose Symphony is copyright 2005 by Wolf, Keens & Company (info@wolfkeens.com).

Cheryl Fippen was a cellist with the San Jose Symphony and is now a member of the Silicon Valley Symphony. She is a past Vice President of ROPA.