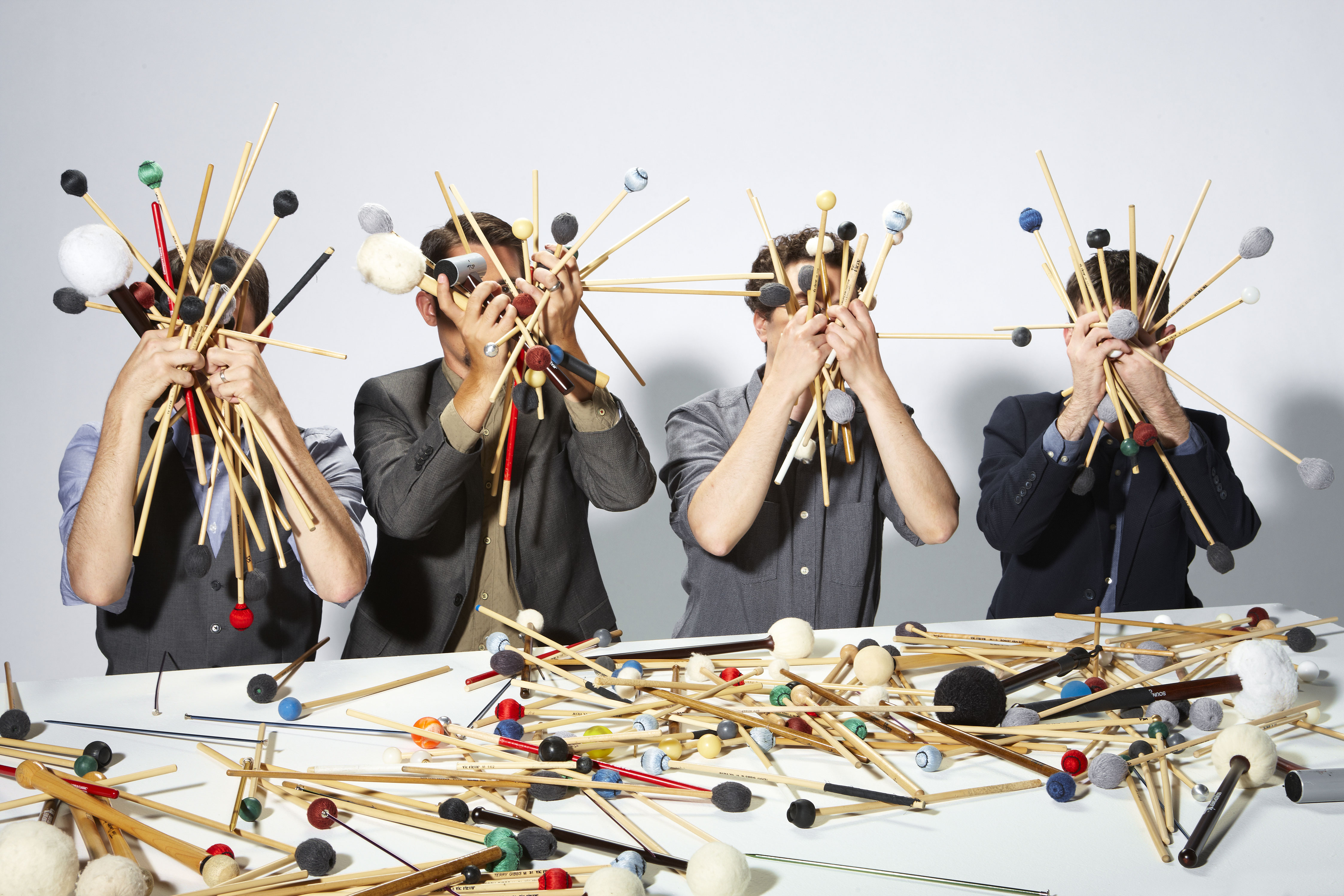 As a touring percussion quartet, devoting an entire concert to new works for our group sometimes seems like a luxury. The logistical pressures of unfamiliar venue layouts, small stage sizes, and traveling with instruments, combined with the musical demands of presenters and unfamiliar audiences, means that we often stick with what we know while we are on the road. Combined with the amount of time that it takes to learn a new piece of music and then be able to perform it at the same level as one of our standard pieces of repertoire, it often feels like the deck is stacked against us exploring new works.

However, as an ensemble devoted to expanding the chamber music repertoire and pushing the musical capabilities of percussion, it is imperative that we balance our touring activities with time dedicated to developing new music. Our home town season in Chicago has generally served as the laboratory for exploring new programming possibilities, but as we were fortunate in the last few seasons to begin performing in larger Chicago venues such as the Museum of Contemporary Art, Logan Center for the Arts at the University of Chicago, and Pritzker Pavilion in Millennium Park, big questions began to arise around programming: What’s the best situation to try something totally new and risky? How do we make every concert in Chicago special, even if the program is comprised of composers or works no one knows? Can we build an audience that’s specifically interested in the unfamiliar?

Thus, Third Coast Percussion launched “Currents” as its incubator for new ideas. It is a concert series that we self-present in our home city of Chicago that is curated 100% by the four members of the ensemble. It is intentionally filled with musical works that are new to the quartet, and often includes premiere performances of pieces composed specifically for us. It is our opportunity to push ourselves to musical areas previously unexplored and try out new ways of performing as an ensemble. A “Currents” concert could include a cohesive, thematic program, or it could take the audience along a series of unforeseen twists and turns. It also might include collaborations on stage with some of the leading musicians in the contemporary music community and beyond. In addition, it is the platform for our Emerging Composers Partnership, a program that we’ve developed to work with some of the most exciting young artists of our time. The beauty of the series is that it is malleable, filled with innovation, and is our opportunity for growth as a group.

The first concert that we presented under the “Currents” label occurred on March 15, 2015 at Constellation, a popular venue in Chicago for presenting new music. The program featured premieres of newly commissioned works and other unique, boundary pushing repertoire from today’s most creative thinkers, including the world premiere of a new work by Brooklyn-based composer Adam Cuthbèrt, Democracy Looks Like for four electronically processed kalimbas, inspired by both Chicago’s Footwork dance music and the rhythm of transcribed protest chants, as well as a world premiere from Philadelphia native Jonathan Pfeffer entitled Jonathan was killed in battle against the Philistines. This work, which was created and commissioned through our Emerging Composers Partnership, is described by the composer as “a one-act metatheatrical savage noise comedy for four percussion actors” and pushed us to places that we never thought we’d go on stage. Ensemble member Robert Dillon also contributed to the program through his composition “Ordering-instincts”, an exhilarating work that makes the most out of minimal sources: tuned metal discs, planks of wood and 2 drums. In addition, percussionist extraordinaire Ross Karre joined Third Coast for Mark Applebaum’s kooky and inventive Straitjacket, and contemporary flute master Rachel Beetz joined the ensemble for Tyshawn Sorey’s Trio for Harold Budd.

Constellation is a hip, casual venue, with a bar and a very underground feel, and we made choices about presentation to create a relaxed atmosphere while still upholding a high performance and production standard. The concert was at times contemplative, silly, virtuosic, and clever. Audience feedback has made it clear that everyone had different favorite and least favorite pieces on the program, but mostly, people enjoyed being surprised by the experience. They can expect to be surprised in different ways at the next “Currents” concert, currently in the works for spring of 2016.

Even though the name “Currents” is new, this brand is a way to further focus the self-presenting that Third Coast Percussion has done since its beginning. We take pride in the aesthetic variety that we’ve presented for our hometown audience over the years: programs that explore connections with astronomy or architecture; concerts that forgo the traditional concert format for an immersive experience with smooth transitions between works and theatrical lighting; programs that pair two contrasting composers such as John Cage and Philippe Manoury, or George Crumb and Steve Reich, or maintain a particular focus on local composers. The “Currents” brand not only gives us the opportunity to maintain this programming variety; it creates the expectation—for ourselves and for our audience—that we will be trying something new every season.