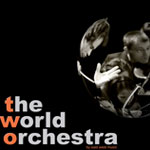 Inspired by the vision of Sir Robert Mayer, pioneer of classical conciertos for young musicians in the 1920’s, was Igor Markievich who after the Second World War, began assembling international orchestras as a symbol of hope for the future.

In 2004, Josep Vicent assumes directorship of the Jeunesses Musicales Orchestra, relaunching the project and performing in venues such as Berlin Philharmonie, Vienna Konzerthaus, Orford Festival, Auditorio Nacional in Spain, Muziekgebouw Amsterdam, Palau de les Arts, in Beijing Philarmonie … tours in Cyprus, Austria, Germany, Holland, Canada, China and Spain.
With the THE WORLD ORCHESTRA project revived, managed by East-West Music in collaboration with Jeunesses Musicales of Spain and promoted by its president Mr. Jordi Roch. this combination of youth and solidarity, uses the medium of music not only to entertain, but on another level as a communicator of ideas, a platform to spread the social involvement of young people from over 50 countries that comprise the WORLD ORCHESTRA.
The WORLD ORCHESTRA collaborates regularly with young soloists and directors such as Gwineth Wentink (Netherlands), Ursuleasa Mihai (Romania), Ivan Martin (Spain), Alina Pogostkina (Germany), Yayoi Toda (Japan), Yaron Traub (Israel) … ∫ œ
In September 2009, for all their dedication and hard work, “The World Orchestra” and its director Josep Vicent are appointed “Ambassadors ” for The Foundation Culture and Peace, chaired by Federico Mayor Zaragoza.
The World Orchestas’ Overtures of Martin y Soler received unanimous acclaim from the critics in 2008, and the recording of “The Rite of Spring” by Stravinsky received the award for Best Album of the Year 2009. During 2010, The World Orchestra has performed on tour in Asia and Europe, its recent activities include concerts in Spain for FORUM 2010 Cultures, and at venues such as the National Auditorium and Palau de les Arts.