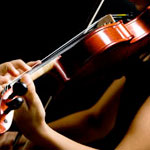 Taos School of Music is dedicated to furthering the appreciation, understanding, and performance of chamber music by helping young string and piano students develop their musical awareness and comprehension, and in the process providing Taos audiences with the finest chamber music concerts possible.

FOUNDED IN 1963, and the subject of many feature stories including those on NBC’s “Today Show” and National Public Radio’s “Morning Edition,” Taos School of Music is one of the oldest and most respected summer chamber music programs in the country. Its alumni have served as members of such award winning chamber groups as the Alexander, Brentano, Chester, Lark, Muir, Shanghai and St. Lawrence quartets, the Eroica Trio, and Musicians from Marlboro. They have become principal players and members of the major orchestras  in the United States: Boston, Chicago, Cleveland, Detroit, Los Angeles, Metropolitan Opera, Milwaukee, National, New York, Philadelphia, Pittsburgh, St. Louis, St. Lawrence, and San Francisco.

It is an intensive eight-week program devoted solely to the study and performance of chamber music in which students receive daily coaching and have extensive performing opportunities. A student to faculty ratio of less than 4 to 1 allows for close personal attention rarely found among music schools.