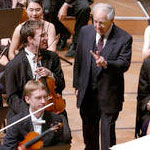 Joined by world-top professors, artists and music students from all over the world, Euro Music Festival has been held twice a year each summer and winter in Europe and South Korea. It has been the place for the friendship and unity through mutual exchanges by music which is a universal language. It is also the place of music education for young musicians of next generation.

The Summer Euro Music Festival had been held in major cities of Europe including Vienna Austria, Prague Czech, Mainz Germany, until 2004.
Since 2005 until 2009, it had been held in Leipzig, Germany. Under the cooperation with the University of Music and Theater Leipzig which boasts the oldest tradition in Germany, the Summer Euro Music Festival had been held for one month from July to August and is composed of various programs such as lesson, masterclass, lecture, tour to musical places, concert, etc.
The concerts had taken place at main venues in Leipzig such as the Gewandhaus, Thomas Church, Alte Handelsboerse, Bundesverwaltungsgericht, Mendelssohn Haus, Schumann Haus, University Concert Halls, etc.