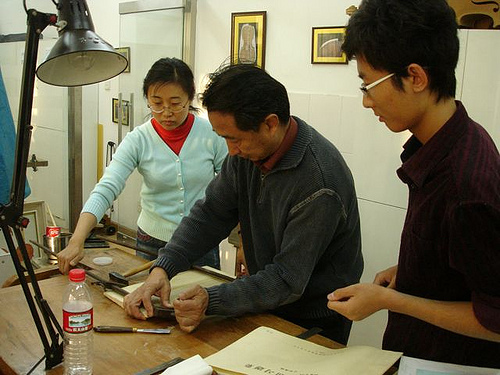 Chinese-made stringed instruments have taken the market by storm. In just a few short years the impact on musicians, makers, and dealers has been profound. As is often the case with an upstart new entrant to a manufacturing market, there are positive and negative effects. These will be discussed later in the article but my own encounter serves as a good illustration of what this phenomenon has meant for professional musicians.

It was the fall of 2008. After 14 years with the AFM Symphonic Services Division, I had just started a new job. I needed to play a gig – any pensionable gig – in order to qualify for my AFM pension. I hadn’t played in years but this wasn’t the first time I had tried to make a comeback after a hiatus of several years. I was pretty sure it was just like riding a bicycle…

I secured a gig with the Niagara Symphony and set out to acquire a violin. I had been pleased with my past experiences with Remenyi House of Music, so I made my inquiries and paid them a visit with the intent of renting a violin for a month in order to prepare for and play this engagement. Upon my arrival, I was placed in a room with a number of violins which I later learned were all in the $2000-3000 range, a price range that would not normally include professional-quality instruments. And sure enough, there were the usual sturdy and reliable square-shouldered Germans, red-varnished French fiddles, and other competently made but unremarkable instruments.

Except for that one in the corner. It practically glowed, it was so beautiful. It had a gorgeous golden-brown varnish and the look of a fine old Italian violin. I picked it up and began to play, instantly enamoured of its rich yet refined tone. It didn’t take long before I was standing at the counter saying, “This is the one.”

Imagine my surprise and amazement when the clerk wrote on the sales receipt, “Made in China, 2008.”

What is the cause of all of this? The answer is globalization, the opening of free markets in China, and cheap Chinese labour.

The entrance of Asian countries into the western musical instrument market is not a new phenomenon. The Japanese Yamaha brand is a household name that is synonymous with well-engineered, mass-produced quality pianos, wind instruments, and percussion equipment. But it is China that now, as an emerging economy, has the fundamentals to be a major player in a market that until recently has been dominated by European makers – stringed instruments of the violin family.

The Chinese are highly motivated to excel in this business. They value music for its impact on personal and intellectual development. In China, every child between the ages of 6 and 9 is required by law to learn to play a musical instrument. Building on the passion of the Japanese for western music, and possessing the essential resources of cheap, well-trained labour and a good supply of tonewood in the Himalayas, China has seized the opportunity to become a leader in the production of stringed instruments. A turning point came in 2003, when the Chinese government first mandated that all “national industries” must make a profit. The quality and quantity of these instruments has dramatically increased since then, although the rapidly evolving industry feels like a jungle on steroids. Like China’s entire economy, the stringed instrument production business is growing like wildfire in a fashion that often seems out of control.

Almost three years after my brief but intense 2008 experience, I approached the owner of Remenyi House of Music, Michael Remenyi, to find out what the dramatic rise of Chinese-made instruments has meant for him. I learned that Mr. Remenyi continues to champion European-made instruments as his core business, despite the fact that he can make more profit on Chinese instruments. A sense of heritage and tradition are at the heart of this decision but he has some sound business reasons as well.

A recurring theme on the blogs and in shops like Mr. Remenyi’s, is the problem of establishing the provenance of Chinese stringed instruments. Sellers often represent themselves as selling the output of a “factory” when in fact they are distributing product from multiple sources. Chinese-made instruments frequently carry labels bearing European-sounding names. An additional complication is the fact that the top 5% of mass-produced instruments is difficult to distinguish from workshop instruments.

It is important for Mr. Remenyi to be accountable for what he sells. As a professional violin shop with a long-standing policy of giving 100 cents on the dollar on a trade-in, he prefers to deal in European-made instruments. He says, “European instruments are a known-quantity. There is an established and well-known price structure. I can be 100% sure that a European instrument will hold its value.”

On the other hand, with provenance often uncertain, Chinese pricing is all over the map. Prices vary dramatically from one shop to the next. Mr. Remenyi says that he cannot be sure that a Chinese-made instrument is priced properly or will be able to attract the same price upon resale.

And then there is the wood. Mr. Remenyi finds that the Chinese makers often do not age the wood properly. It is frequently artificially prepared using techniques such as chemicals or baking. This is especially problematic with instruments in the lower ranges, where the pressure on the wood is greater. If the wood is improperly treated, they simply don’t hold up. Mr. Remenyi wants to be able to assure his customers that the instrument they are buying will be better, not worse, in 30 years. He doesn’t feel that confidence with Chinese-made instruments, observing that “the world is full of broken Chinese cellos and basses.”

Mr. Remenyi is also concerned about the degree of standardization in the production of Chinese instruments. He stresses the importance of the connection that a musician must feel with his/her instrument. It becomes a relationship that is almost personal in nature. This relationship is compromised to the extent that everything about the production process is standardized.

He said, “There are three components to violin-making: design, materials, craftsmanship. If somehow we manage to get all three perfect every time, there is in fact a loss – of character, individuality that comes with a truly unique hand-crafted instrument.”

Mr. Remenyi raises the delicate question of cultural appropriation. He is worried that the remaining traditional European workshops (of Schönbach, Mittenwald, Bubenreuth, Klingenthal and Reghin) will be forced out of business, unable to compete with the cheap labour and economies of scale from Chinese mass-production. With the largest Chinese factory producing more than 300,000 violins per year, it is no wonder that they now have 80% of the entry-level market. In many cases, European makers are going to China to train their own competition. In Mr. Remenyi’s view, it would be a tragedy if the European tradition were lost.

On the plus side, under the heading of “What doesn’t kill you makes you strong,” competition from the Chinese has forced the European makers to “up” their game by becoming more competitive on both price and quality. There have been significant changes even in the relatively few years since my 2008 experience. If I were to go on the same mission today, that Chinese violin would be “in the room” with others in the same price range, but it would no longer stand head and shoulders above the pack. Mr. Remenyi claims that the better commercial grade hand-finished European stringed instruments cost less today than they did 30 years ago.

There is no doubt that in the lower and middle ranges, Chinese-made instruments are a serious and legitimate choice for buyers seeking value. But are they producing works of art rather than just craft? A musician would be hard-pressed to spend more than $6000 for even the very best hand-made Chinese instrument from a one-person workshop. At that price Mr. Remenyi believes there is a European advantage. At the $1000 level, it is a tougher call.

Professional musicians are responding to Chinese-made instruments with measured enthusiasm. There have been some A-list endorsements but one must always question the motivation in such matters. The most common scenario is that a professional string player will own two instruments – a fine Chinese-made workshop instrument and a specimen from what we have all grown up understanding to be the gold standard – a beautiful antique instrument made by an old European master. And I don’t need to tell you which one is Number One.

Are Chinese-made instruments adding anything to a professional musician’s world? Sure they are. Anytime competitive pressures drive innovation and result in improved quality and lower prices, buyers benefit. But let’s hope that this profound redefinition of the market is not so successful that the ancient and revered European tradition is lost.