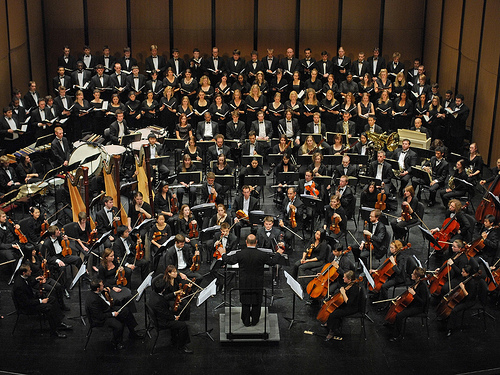 WHAT WERE THEY THINKING?

The purpose of a post-secondary music school is to prepare student musicians for professional employment. Successful placement of program graduates is an important performance metric for any professional training program. So why on earth would a music school require its students to reduce employment opportunities in the labor market by displacing professional musicians and doing their work for little or no pay? What were the people at Roosevelt University thinking when they offered up their student orchestra to perform for free for the Harris Theater for Music and Dance? Fortunately, they were stopped in their tracks by the Chicago Federation of Musicians, Local 10, AFM (CFM), a union that clearly understands that Job One of any union is to protect its members’ work.

But why does this keep happening? Maybe they just don’t get it. Let me try to explain.

I put myself through music school by playing in professional orchestras. Notwithstanding the withering disapproval of our old-country master teacher, complete with dark threats of the fate that might befall a hapless student who dared to fund her education through the pursuit of such a base activity (“I will smoke you out…”), many of us at the University of Michigan School of Music put music folders over our faces to avoid detection and furtively boarded the buses that had been sent by the Flint and Toledo Symphonies for the purpose of transporting U of M students to their rehearsal halls.

When I arrived at my first Flint Symphony rehearsal in 1974, I was greeted at the door by the AFM union steward. He said, “Sign your card, pay your dues, and play. In that order.” In that setting, we were professional musicians who happened also to be students, with all of the attendant rights and responsibilities of professionals.

To this day, there are many such long-standing symbiotic relationships between professional orchestras and music schools. The students need the experience and the cash. The orchestras need the talent. A classic example is the Cleveland Institute of Music. CIM students find work in nearby orchestras in Cleveland, Akron, Canton, and Warren, to name a few. They join the union and they get paid union rates. Everybody wins.

These are healthy relationships that must not be jeopardized by the unscrupulous and, indeed, self-defeating actions of music schools that occasionally succumb to the temptation of short term gain and obligate their music students, one at a time or as a group, to work for free for performance organizations that would otherwise be engaging – and paying – professional musicians. This is not a new problem. I wouldn’t even call it a trend. It is more of a “Whack-a Mole” sort of thing. It will keep happening from time to time and the AFM will, quite properly, fight back to protect the work of its professional members. This is exactly what took place in Chicago this summer when the CFM forced the Harris Theater and Roosevelt University to stand down from their plans to replace AFM professional musicians with the university’s unpaid orchestra for a production slated for the upcoming 2010-2011 season. Michael Tiknis, the President and Managing Director of the theater, seemed to think that the union should have met them half way. He said, “…we took the concerns voiced by the Chicago Federation of Musicians very seriously and made numerous attempts to seek a reasoned compromise that would both preserve the collaboration and enhance the excellence of the performance. We have failed in that attempt.”

Is there a middle ground? Should the union have compromised? Is it ever acceptable for students to perform for free or for less than union scale? Guidance can be found in some fundamental principles. These are not new ideas. The AFM entered into an agreement with the National Association for Music Education (MENC) in 1947 that could be considered a decent start (http://www.menc.org/about/view/the-music-code-of-ethics). Here is a summary of the key points, updated to address current issues.

1. It is never acceptable to replace paid professionals with student performers who are either unpaid or being paid less than union scale. It harms the students who are being exploited and it harms the professionals by taking their work.

2. Music schools and “training” orchestras should not proceed with any project involving public performances by students without the approval of the local union.

3. Training orchestras that don’t pay musicians or that wish to pay musicians less than the local union scale should enter into a standing agreement with the local AFM union. The agreement will probably include a requirement that there be a real curriculum, a limit on the number of performances, and a limit on the number of years a student can participate. In other words, it should clearly be a school, not a job.

4. Any unpaid or below-scale performances by students should be clearly billed as student performances.

Let’s apply these principles to some specific circumstances and see if they get the thumbs up or thumbs down.

Harris Theater. This one is pretty clear cut. The Theater had often engaged professional musicians in the past, usually the Chicago Sinfonietta, which has a collective bargaining agreement with the CFM. The production in question was to involve paid professional dancers and stagehands. Ticket prices ranged from $45 to $95. When the union objected the Theater offered a tempting compromise involving 30 paid CFM musicians and 30 students along with a “just this once” promise. The union wisely chose to sacrifice the work for 30 people rather than allow a bad precedent to be set.

New World Symphony. This Florida-based organization could be considered the poster child for this issue. In response to grave concerns about the impact of the NWS on the classical music community in the greater Miami area, the organization has developed and maintained a long-standing relationship with the AFM. There is a written agreement between the parties, known as a “fence” agreement because it confines the NWS to certain limited activities in order to provide area professionals with some measure of protection against unfair competition by student musicians. This “fence” agreement reflects many of the fundamental principles outlined above. There is a real curriculum, which provides essential information including the role of the AFM in the lives of professional musicians. Student attendance is limited to a maximum of three years. There are limits on the number and types of performances. Professional fees must be paid for recordings.

The “fence” agreement has been place for a number of years. It is renegotiated periodically in order to give the parties an opportunity to address any mid-term problems that might arise. However, many believe that the very existence of the NWS in that part of the world continues to do irreparable harm. It is very difficult for a professional orchestra to compete for audience and resources in a community that has such a well- funded and high-profile “training” orchestra. The Fort Lauderdale-based Florida Philharmonic struggled for years and ultimately succumbed in 2003, unable to attract sufficient audience and fundraising dollars to continue. The big money was going to the NWS. It still does.

Brott National Academy Orchestra. This one is a real problem. This Hamilton, Ontario-based ensemble does not have an agreement with the AFM and is in direct competition with the local professional orchestra, the Hamilton Philharmonic. It is unacceptable for this underpaid and overworked “training” orchestra to be crowding out a professional orchestra by acting like one, i.e. producing a full season with multiple programs, selling subscriptions, and fundraising in the community. Although the BNAO has been in place for many years, it is not too late for the AFM to pursue an agreement with this organization. All that is required is a commitment to the project and the deployment of personnel with a bit of campaign experience.

Youth orchestras. Most professional musicians have fond memories of time spent performing with youth orchestras. The classic model, which is accepted by most AFM locals, is for these unpaid students to do a limited number of performances and some touring involving just one or two programs. Performances are clearly billed as student or youth performances and tickets, if sold, are priced accordingly.

Student interns. Some music schools have entered into agreements that permit students to occupy training positions in the local professional orchestra. Again, the basic principals, if properly applied, will ensure that the union is in agreement and that no professionals have been displaced. A good example is the relationship between the Eastman School of Music and the Rochester Philharmonic. An agreement is maintained between Eastman and the Rochester Musicians’ Association, Local 66 AFM. Student interns receive scholarships from the orchestra that are the equivalent of union scale wages. No Philharmonic musicians or positions have been replaced by students. The parties take great pride in the fact that there has been no loss of jobs as a result of this arrangement.

With a bit of forethought and with the basic principles in mind, the interface between training organizations and professional musicians can be successfully managed. Situations like the Harris Theater/Roosevelt University serve to remind us that we must remain vigilant in order to ensure that boundaries are respected and that training organizations operate within their mandate.