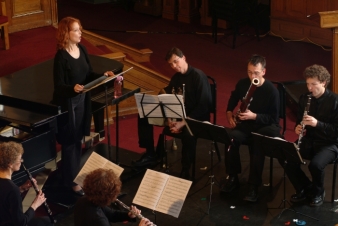 “It’s both. A labor of love and a way to get gigs.” With that forthright response, Mary McGeer puts a splash of cold water on the romantic notion of the creative artist.

The apartment, located in Toronto’s southeast artists’ enclave, is charming. The coffee is excellent.

But make no mistake – creative artist she is. The programs she conceives and produces are as much works of art as the works that comprise them. Ms. McGeer is co-founder, Principal Violist, and Artistic Director of Talisker Players Chamber Music, a Toronto-based group that is dedicated to the performance of music for solo voice and small instrumental ensemble.

The name? “No, no deep hidden meaning , no erudite reference. I just like the Scotch.”

The concept of Talisker Players Chamber Music was an offshoot of a well-established chamber orchestra that was founded by Ms. McGeer in 1995 and continues to this day in the business of meeting the instrumental music needs of local choirs. Intrigued by the possibilities of combining voice with small ensembles, Ms. McGeer and co-founder Valerie Sylvester began by producing two concerts during the 1999-2000 season. The idea took hold and by May 2000 Talisker Players Chamber Music was a fully incorporated charitable organization with a board and a three-concert subscription season.

A decade later, Talisker Players Chamber Music is a sparkling gem in the array of smaller budget performing arts groups that add richness to the city. Every major population centre has such groups which complement the more traditional offerings of flagship organizations such as symphonic orchestras and opera companies. In addition to adding cultural value they also serve as a source of employment for professional musicians. Small ensemble work is an important piece of almost every urban free-lance career (the alternative to the traditional “big orchestra job”). It is therefore instructive to take a look at what makes a smaller budget ensemble such as Talisker Players Chamber Music a success. But in doing so, it is equally important to not shy away from the reality that most of these smaller ensembles are subsidized in ways that are not always visible – by a day job, by a spouse, or, all too often, by the unpaid labor of the founder.

The path to success: the Total Concert Experience

“The artistic success of Talisker Players Chamber Music flows from the variety of program elements, the natural accessibility of vocal music, and attention to detail in order to achieve a seamless presentation,” says Ms. McGeer. Talisker Players programs are always built around a theme. There is a strong theatrical component aided by a Stage Director, a lighting expert, and an actor who presents theme-related readings during setup changes to add interest, color, and continuity to the total concert experience. The singers can only be described as stellar. Their delight in having an opportunity to perform these works is evident. The instrumentalists are a carefully selected group of players with a “chamber music” orientation, meaning that they are attuned to each other both on and off the stage.

The programs are developed through the creation of a unique catalog. Ms. McGeer is always searching for new works that fit the ensemble’s mandate. When a work is discovered it is filed in multiple “baskets,” e.g. poet, composer, subject. As the “baskets” fill up program ideas emerge. Themes for the 1009-2010 season included American poets and songs of the sea. Past seasons have included programs built around themes of war and peace, sleep and dreams, and the poems of William Blake. The group actively commissions new works. A special effort is made to work with the many wonderful Toronto-area composers, who can be on site to work with the group and can make a personal connection with the audience. The connection with Toronto composers is just one of several partnerships that contribute to the success of Talisker Players. The Players are Musicians-in-Residence of Massey College, University of Toronto. This gives them office and rehearsal space in exchange for several performances each season. Funding partners are also important to the ensemble’s success. Competition for government funding is fierce, yet Talisker Players has been successful in securing approximately 20% of its funding from the three levels of government. Their free outreach concerts in homeless shelters and community centres help maintain their partnership with the community. Talisker Players partner with Trinity St. Paul’s Centre for their main performance venue. St. Paul’s is one of the city’s premier concert locations with acoustics and ambience that are ideal for chamber music.

Challenges for the future But the challenges are enormous. “If all of the work involved with running this organization were paid, our budget would go up by 50%,” says Ms. McGeer. She performs endless hours of unpaid work, yet the thought of sacrificing anything that would compromise the art so that she can be paid more is unthinkable. She makes others a priority, and is fiercely committed to ensuring that her artists are paid well. Growth and development are also non-negotiable. The ensemble recently added a second performance of each program, a move that is important for both artistic and audience development. That second performance has a price tag like everything else but that, too, is here to stay. And many of Ms. McGeer’s unpaid hours are due to the attention to detail that makes these concerts so wonderful. “I’m obsessive,” she admits. Keeping up with her viola is also time-consuming.” If I didn’t play I would have more time to run this. But I don’t want to stop playing.”

Sooner or later the organization is going to have to come to terms with this issue and find room in the budget for an appropriate salary for the Artistic Director. This will be an essential component of succession planning. The ensemble has a loyal audience, a hard-working board, and solid support from foundations, arts councils, and individual donors. They have received consistently excellent reviews over the years. They recently produced their first CD in celebration of their tenth anniversary season while maintaining a busy concert schedule. They have found a niche and have been successful in filling it while keeping artistic standards high.

After a decade of delighting Toronto audiences, the Talisker Players aren’t going away anytime soon. The city and its musicians are richer for that.