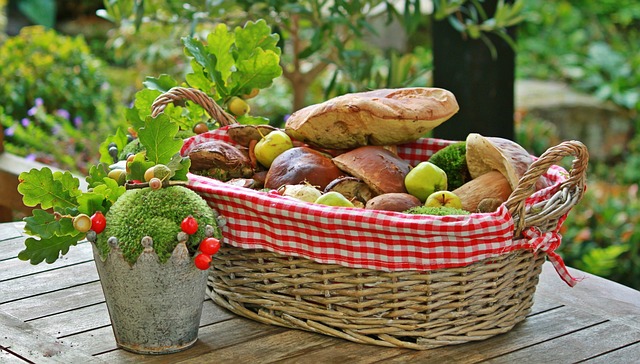 Happy Thanksgiving to you and yours from everyone at Polyphonic.org!  To celebrate the holiday, we asked each of our editors to design a musical “feast” – a menu of some favorite musical selections for which they are thankful.  Enjoy! Appetizer: Hot brie cheese and spicy goat cheese with fancy crackers, pepperoni slices, spicy salsa, and lots of olives.
Festival Overture by Dimitri Shostakovich
To get us all in the holiday/party mood.

Salad: Concertante for Violin and Viola by Wolfgang Amadeus Mozart
Elegant, proper, gorgeous, and oh, that viola! (Good for you!!)

Pre-Dinner Appetizer: The smells from the kitchen!
“Swan Song” from Carmina Burana by Carl Orff
Getting the bird ready for the dinner table.

Main Course: Second Symphony – 1st movement by Johannes Brahms
The family starts out slowly, feeling each other out. A few tentative limits. And then it gets interesting – but never a real argument. We can side-step each other so nicely! And it all feels so comfortable, after all.

Stuffing: First Symphony, 1st movement by Sergei Prokofiev
It’s Mom’s usual dressing but with a few interesting accents – a little pepper? a new spice? Something else?

Side: Algis’ Lithuanian Mushrooms – M.K. Ciurlionis’ tone poem: Jura – The Sea
My husband always makes a Lithuanian dish of mushrooms, sour cream, onion and lemon for our Thanksgiving dinner. Ciurlionis is Lithuania’s best known painter and musician; a contemporary of Brahms. Algis’ grandfather helped found the Lithuanian National Museum, which saved most of the treasured paintings by Ciurlionis after WWII. (And I chose this of his several tone poems because Algis’ sister’s name is Jura; her name means “ocean.”)

Side: Aunt Hilda’s Nameless Dish – we have to taste this thing but we really wish we didn’t. Oh sigh, holidays are hard!
Oblivion by Astor Piazzola, with Gidon Kremer Appetizer: O Lord, Make Thy Servant Elizabeth, Our Queen by William Byrd
William Byrd was the greatest English composer of the 17th century – perhaps of any century. He was also a Catholic, which posed considerable risks in an era when the Vatican was actively encouraging the assassination of Queen Elizabeth. Nonetheless, he was appointed a Gentleman of the Chapel Royal and, with Thomas Tallis, was granted a patent (essentially a monopoly) on the printing of music and ruled music paper, so he had a lot for which to be thankful to Elizabeth. This anthem was likely an expression of that gratitude.

Appetizer: Quartet in A minor, Op. 132 – Molto Adagio; Andante by Ludwig Van Beethoven
During the winter of 1824-25, Beethoven suffered from an intestinal disorder which he feared would prove fatal. This movement, written after his recovery, was described in the manuscript by Beethoven as Heiliger Dankgesang eines Genesenen an die Gottheit, in der lydischen Tonart (Holy song of thanksgiving of a convalescent to the Deity, in the Lydian Mode).
This performance is by the Orford Quartet – unfortunately for me, about a year before I joined them. There are lots of ways of playing Beethoven, but this is as good as example of great quartet playing as one could ever hope to hear.

Entree: Symphony No. 5 by Jean Sibelius
One of the greatest symphonies of the 20th century, in one of Bernstein’s last recordings with the Vienna Philharmonic. It is a powerful interpretation; both idiosyncratic and deeply insightful.

Dessert: Der Wanderer, D. 649 by Franz Schubert
Schubert wrote two songs with this title; this one, to a text by Friedrich von Schlegel, is the lesser-known of the two. I have no idea why; it is stunningly beautiful. If you don’t know German, a translation is mandatory (unless you believe that the words didn’t matter to Schubert). This one is by the English music critic William Mann. The performance is by the incomparable Dietrich Fischer-Dieskau and the great English accompanist Gerald Moore. Appetizer: Salvation is Created by Pavel Chesnokov
A beautiful work of great depth that I have loved since first hearing it in high school.

Entree: Serenade for Winds by Antonin Dvorak
A rich, fun and elegant work by Dvorak – not too filling, but just right!

Side Dish: Overture to Candide by Leonard Bernstein
This is like the cornbread chorizo stuffing we are making – who doesn’t love this stuff! A little heat, a little spice, and gone very quickly! And I just love watching Bernstein conduct this performance. The sheer passion and joy on his face while making music is inspiring.

Side Dish: Electric Counterpoint by Steve Reich
A more reflective and introspective groove as the feast draws to a close.