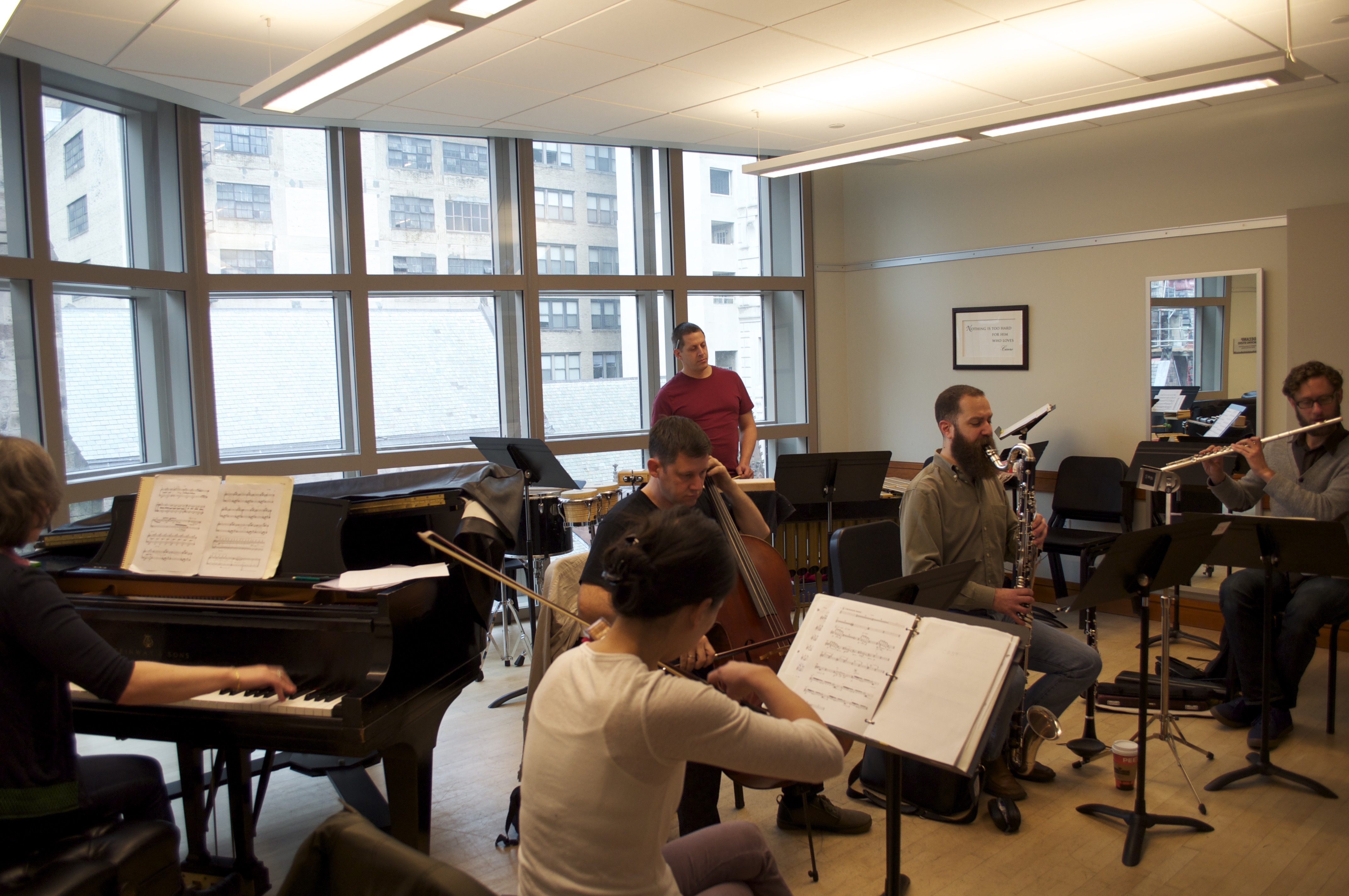 John Pippen teaches courses in ethnomusicology, jazz, and music and culture at the College of Wooster. His primary research has been an extended ethnographic study of the new music ensemble eighth blackbird (lower case intentional). Blending approaches from labor studies and aesthetic theory, Pippen writes about struggle in the classical music scene in the United States. His dissertation combined ethnographic research with historical studies of virtuosity in a detailed examination of eighth blackbird (lowercase intentional). You can read a summary of his dissertation at New Music Box.

All posts from John Pippen
0

Over the last few decades, many American schools of music have embraced the repertoire and missions of new music ensembles. Boundaries are broken, venues explored, students challenged, and new sounds ring out. What a change from the 1980s, when musicologist Susan McClary argued that “both popular and postmodern musics are marked as the enemy, and there is still considerable effort exerted to keep them out of the regular curriculum” (1989, 67). A manifestation of this shift is the ensemble residency. Institutions across the country routinely hire musicians to teach students both the art and business of professional new music-making. Last year, I had the opportunity to explore the interaction between ensembles and institutions. I spent time with three groups at different institutions: Third Coast Percussion at the University of Chicago, the Playground Ensemble at Metro State University Denver, and eighth blackbird at the Curtis Institute of Music. I begin with a scene from my fieldwork in Chicago with Third Coast Percussion: It’s 5:25 P.M. and Third Coast Percussion is running through their music. The quartet has spent most of the day here in their studio space on Rockwell Avenue in Chicago, collaborating with composer Jonathan Pfeffer. The composer prefers to write music for people he knows well, and he has spent the last two days experimenting with the group and discussing how the piece might work. Pfeffer left a few hours ago, and the quartet has since moved on to music for an upcoming concert. A brief pause lingers after they finish the piece, the members gathering their thoughts.

“We kind of settled into a tempo, and I think we should just roll with that” says Peter Martin. David Skidmore observes that the crescendo at measure thirty could grow louder. They discuss the dynamics and phrasing for a few minutes, but at some point, without my realizing it, the conversation drifts to the old Nickelodeon show, You Can’t Do That on Television. This type of break is not uncommon for these good-humored performers, but it lasts only a few minutes.

“Like in 2017?” replies Robert Dillon, a sarcastic grin spreading across his face. Pfeffer working with Percussionist David Skidmore on the Kalimba.

The joke is funny, but rings true. The past week had been especially busy, with residency activities at the University of Chicago, a rehearsal with the Chicago Youth Symphony, and the collaborative project with Pfeffer. Besides late night meals and occasional rehearsal jokes, the four percussionists have gone without a break for about nine days, often working long hours and hauling equipment from one locale to another. Phones are always close at hand as members check the progress on upcoming projects, contracts, and gig schedules. After laughing off Rob’s joke, they run the piece again, this time with the lights out as they’ll perform it.

I describe this scene in detail because it is common to Third Coast Percussion, eighth blackbird, and the Playground Ensemble. Long days of work followed by rehearsals for quickly approaching gigs was common to all three ensembles. Performers strive for a high level of musicianship that requires focused attention and lengthy rehearsals of difficult music. Humor is frequently used to lighten the mood, but nothing can stop the relentless approach of deadlines.

These musicians are, to invoke the buzzword of our time, entrepreneurs. They “create success” for themselves (Baumgartner, 2014), innovate, collaborate, and tout what psychologist Carol Dweck (2006) dubs the “growth mindset.” Obstacles are transformed into creative guidelines, and programs created to attract audiences with enticing themes. Entrepreneurialism is celebrated by many in the arts scene, but the reality of entrepreneurialism is less sunny than the image projected by consultants and administrators. Because it valorizes flexibility, opportunism, and social relationships, entrepreneurialism demands constant work. When every moment has potential meaning, it can be hard to relax. During an open reading session for student compositions, cellist and Playground Ensemble member Richard vonFoerster gives feedback to the composer.

And work is constant in a small flexible ensemble. During my fieldwork with these three groups, I saw people working at all hours of the day, often leaving one site of activity to report to another. Even breaks could be filled with work: phone calls to arrange the details of an upcoming gig, meetings with collaborators or students, or attending the premier of a friend’s piece. The flexible nature of these ensembles, a seeming hallmark of the new music scene today, requires constant attention to the dozen or so obligations that, like plates spinning on poles, are poised to fall without warning. A grant application is due. Did you send me that budget? Can you help set up chairs for a second? I need to practice that one part. We have a concert and need some spoken notes. Could you prepare something? Within the residency, tailoring is the working method of the flexible ensemble. Like consultants in the business world, these musical entrepreneurs maintain an influential if somewhat ambiguous relationship with host institutions (Sennett, 2006). At each residency musicians designed projects (concerts, presentations, and teaching activities) that were somehow tailored to the needs of the institution and the abilities of the ensemble. Work included a variety of teaching and performing activities, as dictated by the nature of the institution and the contract of the residency (see the complete grant report for a detailed description of activities). This tailoring required regular communication between ensembles and institutions, a somewhat challenging prospect depending on the number of people involved on each side of the consultant relationship. Furthermore, an ensemble’s impact upon an institution was confined by the temporary nature of the residency itself. None of these musicians were actually full-time faculty members, and their ability to shape institutional policy and goals remained limited by their transience. Nevertheless, it was clear to me that ensembles have a strong and infectiously positive impact upon an institution’s students.

For all three groups, residencies are a major part of professional life and economic livelihood. The two touring ensembles, Third Coast Percussion and eighth blackbird, rely heavily on residencies for their income. Residency activities such as teaching and master classes are often important offerings used to secure gigs within the network of music institutions. Such work varies greatly in length, ranging from a few hours of teaching, lecturing, or coaching all the way to weeks of activities spread out throughout the year (or years as in the case of eighth blackbird’s Curtis residency). For the Playground Ensemble, a single residency provides limited financial support, but gives the group access to percussion equipment, rehearsal space, and performance venues. In addition to economic and logistical support, residencies provide crucial symbolic capital. The currency of the entrepreneur, symbolic capital takes the form of prestige and reputation. Ensembles leverage relationships, prizes, grants, and endorsements from critics and other influential taste-makers to secure future work. The prestige ascribed to a given institution can serve as a sort of sociomusical business card in conversations with insiders and outsiders, as Third Coast Percussion member Robert Dillon told me of their Notre Dame residency:

There’s nothing better than being able to go somewhere and say that you’re tied to this larger reputable institution. For people who know nothing [about new music], if we walk in someplace and say we have ensemble residency at the University of Notre Dame, it’s like, “Wow, you guys must be great!” And if you’re talking to presenters or managers, then they know the person who runs the [DeBartolo] Performing Arts Center [at Notre Dame], and so that’s even better (R. Dillon, personal communication, November 5, 2014). members of eighth blackbird rehearse with conservatory students for that evening’s concert of music from 1924 at the Curtis Institute of Music.

Members of all three ensembles described a similar view of residencies. The prestige and respect perceived to be held by the institution was in effect transferred to the ensemble and provided evidence of the ensembles’ legitimacy and respectability (see further Kingsbury, 1988, and Cottrell, 2004).

Like other aspects of entrepreneurial life, residencies are developed through and contribute to social relationships. They allow ensembles to foster new contacts and project ideas. During fieldwork, I witnessed current plans come to life, while plans for future project ideas where planted in institutional spaces. At all three institutions, ensemble members became, to varying extents, part of the educational life and community of the institution, carving out nooks and crannies, as it were, for themselves and for interaction between themselves and students. These types of social relationships were viewed by all as highly valuable when considering the overall value of the residency. The residencies thus reified these relationships into contracted work. For over thirty years now, musicians, arts workers, and presenters have been building a vibrant scene of musical activity that provides much needed relevance to classical music and an alternative to the stodgy programming common within classical music. Creating this scene requires constant energy, constant work, and constant maintenance of social relationships. Projects and programs must be tailored to unique needs, tweaked after they start, and thrown out when they falter. Though rarely examined in the popular press, residencies are an important site in the production of the new music culture so many of us love.

John Pippen teaches courses in ethnomusicology, jazz, and music and culture at the College of Wooster. His primary research has been an extended ethnographic study of the new music ensemble eighth blackbird (lower case intentional). Blending approaches from labor studies and aesthetic theory, Pippen writes about struggle in the classical music scene in the United States. His dissertation combined ethnographic research with historical studies of virtuosity in a detailed examination of eighth blackbird (lowercase intentional). You can read a summary of his dissertation at New Music Box.