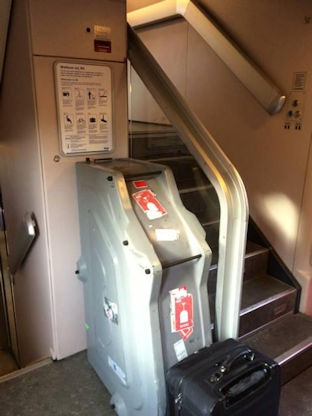 Whatever airline horror story you have about lost or mishandled luggage, I’m pretty sure Robert Black can top it.

Robert, as many of you around here know, is a brilliant, nationally recognized double bass player and teacher. He is perhaps best known for being a founding member of the avant-garde music ensemble, the Bang on a Can All-Stars, a group that regularly plays all over the world. Robert has also been a faculty member at The Hartt School for many years, and is currently the chairman of the school’s string department.

Earlier this summer, Robert was in Brazil, teaching and performing – as he has for many summers – at the Festival Eleazar De Carvalho in Fortaleza.

When the festival was over in mid-July, he packed his custom-made instrument (more about that in a moment) into its massive, heavy-duty fiberglass and wood case and made his way to the airport to fly back to JFK, via TAM Airline. (TAM, formerly the largest carrier in Brazil, has since reorganized to form LATAM.)

The ten-hour flight went uneventfully. But after arriving, when Robert went to retrieve his instrument in the designated Oversized Luggage area – something he has done hundreds of times – his instrument was nowhere to be found.

Now, a double bass (also known as a contrabass, or string bass, or simply, a bass) typically stands around six feet tall (more when the end pin is extended) and weighs 40 pounds or more. When it’s packed into a travel case, it’s more like 100 pounds. It’s not an easy thing to lose.

Robert’s initial reaction was mild annoyance. He found the agent in charge and gave him the baggage number. The agent duly checked on his screen.

“I have no record of this number,” he said. Robert was told to fill out a lost luggage form, which he did. When he tried to ask questions, the airline people told him, in essence, chill, and when we find it we’ll let you know.

This is a good moment to point out that we are talking here about a $40,000 item, hand-made expressly for Robert in 2009 by a French maker, Patrick Charton. It is literally irreplaceable. Among other features, the instrument has a removable neck so that – ironically enough – it can be more easily handled at airports. Even so, when packed in its case, it is a formidable object, roughly the size of a jumbo washing machine.

Robert drove home to Hartford, concerned but not yet panicked. Over the next several days, he made what he estimates to have been two dozen phone calls to the number he had been given. Most of his calls simply went unanswered. When someone did pick up, the message, over and over, was that the airline had “no record” of the bass.

At one point, Robert was told that his missing bass was being taken to a “higher level” of search. Still nothing.

Sensing a bad outcome, and with panic now indeed setting in, Robert called his insurance agent and began to explore making a claim.

“At this point I figured the only possible explanation was that it had been stolen.”

Just to add to the overall level of angst, and so that no smart aleck is tempted to whisper “first world problem” at this tale, in the middle of his lost-bass drama, Robert was obliged to fly to Kurdistan for a multi-day residency of teaching and playing. (A bass, mercifully, was supplied by his local hosts.) With its ten-hour time difference and unreliable phone and Internet service, Kurdistan was not, let us say, the optimal place to continue the quest for his missing instrument.

After returning home, and with roughly two fruitless weeks now having elapsed, Robert suddenly had the idea of putting his plight on Facebook. He was not a particularly frequent or enthusiastic user of social media, but desperate times, etc. etc.

With no particular expectation of success, he posted a photo of his distinctive-looking bass case, and offered a brief written summary of his woebegone story. “A guy I didn’t know, but who was a bass player himself, posted a reply saying he thought he saw my instrument in a remote area in the Toronto airport. I didn’t believe it at first.”

But sure enough, after another round of calls, it was determined that this was, in fact, Robert’s missing instrument.

Of course, it took almost another week, and several encounters with a distant “call center” to confirm everything.

Robert pondered driving to Toronto to pick the instrument up. But then, on an August morning almost three weeks after the fateful flight, a truck pulled into Robert’s driveway in Hartford, and the driver rolled out (the case has wheels) the missing bass.

“It was a FedEx truck. They actually FedExed it! I can only imagine what that cost, from Toronto no less.”

And as it turned out, the mystery was not so mysterious. The original flight from Brazil to JKF had, in fact, later continued on to Toronto.

“So it seems they just forgot to take it off in New York. But why they didn’t immediately realize their mistake, and why they had no record of it, I have no idea. I guess we’ll never know.”

Postscript: Robert’s incident had a happy ending, but almost every player of a string instrument has airline stories. The industry, it seems, is uniquely flummoxed by violins, violas, cellos and basses. If you have such a story, send me an email. Maybe we’ll make this an occasional series.