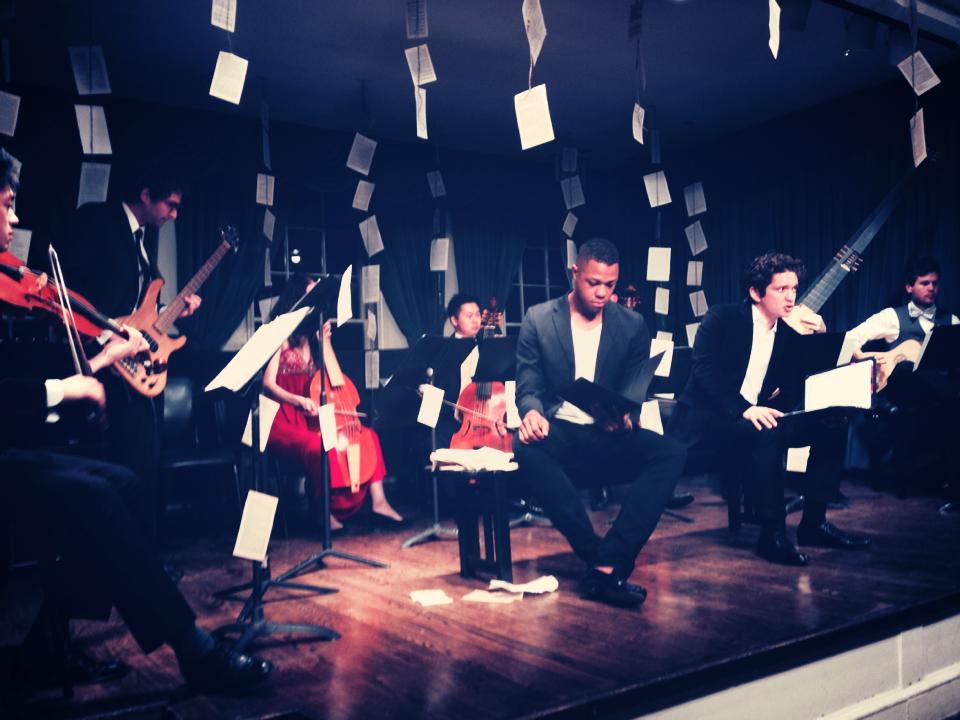 With an inclination for eclectic projects, violinist Francis Liu specializes in performing contemporary works and period interpretations of Baroque and Classical repertoire. In addition to being co-founder of New Vintage Baroque, he has appeared at the festival “Dans les Jardins de William Christie,” working with members of Les Arts Florissants. He has also been on tour with the Baroque ensemble Musica Angelica and the actor John Malkovich in two productions, “The Infernal Comedy,” and “The Giacomo Variations.” Upcoming projects include performances with the Bach Players of Holy Trinity, the Sebastians, and the New York-based contemporary ensemble, Hotel Elefant. Mr. Liu has received degrees from Rice University, the University of Maryland, and the Juilliard Historical Performance program.

All posts from Francis Liu
0

It seems counterintuitive: how is it that so many musicians dedicate their lives to the study and practice of repertoire written so long ago by composers who no longer walk the earth? Look deep into the music, however, and one will find within it a vitality that is ripe for the harvest. This vitality is present not only as the notes are manifest as ephemeral waves of sound night after night on the stage, but even as the notes lay inert on paper. There are stories in the music to be mined, especially when we imagine a work as a distillation of its context and time, focused through the pen of a composer. Realizing that a piece of music does not exist in a vacuum may seem obvious, but acknowledging that fact also means acknowledging that playing the notes alone is only half the performance. The other half consists of the people, places, personalities, habits and stories that go with a work. How do we integrate these hidden aspects into the performance when the conventions of the concert hall often limit them only to the program notes?

This is the question that New Vintage grappled with in its second season, supported in part by a grant from the Paul R. Judy Center for Applied Research at the Eastman School of Music. To connect with the colorful events and the peculiar personalities related to the repertoire, New Vintage chose to focus its programming through the theme of vice. So much of Baroque music is spiritual with a heavenly-bound gaze focused towards eternity. In contrast, this season was about the earthly, the mundane, and the sensual. Each of the three concerts focused on a particular topic: the first, a historical figure; the second, a single music piece; and the third, a lie. The first concert, performed at the Greenwich House Music School, profiled the life of Casanova in both words and music. Our narrator, Doug Balliett, wove together stories and anecdotes about the libertine in between songs and instrumental works. This allowed for more seamless transitions between pieces and greater context given to the works being performed. Casanova makes a wonderful focal point for a program not only because he travelled widely and lived decadently, but also because he was a critical observer of people’s behaviors and motivations. Additionally, his life spanned from the Baroque into the Classical, providing our ensemble with the unique opportunity to explore music inhabiting that murky transition between the two periods. Of course, there is also great excitement to be found in hearing about Casanova’s exploits! For that reason, we commissioned works by Doug Balliett and Elliot Cole, pairing music with a text from Casanova’s memoirs. The size and ambiance of the Greenwich House provided ample opportunities for interaction between the performers, musicians, and audience, making for an intimate night of music and story-telling. Simple staging and visual cues, such as loose pages of Casanova’s memoirs strewn across the stage, helped to remind listeners of the connection between our performance and the source material. The seed of our “Bacchus and the Banner” program formed when New Vintage was approached by the New York Public Library for the Performing Arts to create a program centered around a first edition copy of the “Star-Spangled Banner.” In this program, rather than building a narrative around the life of a single man, we had the opportunity to explore the origin of a famous song and follow the way that its meaning has evolved over time. We began our performance with “Anacreon in Heaven,” the original form of the “Star-Spangled Banner,” which served as an anthem for an eighteenth-century gentleman’s club. With lyrics extolling the virtues of Bacchus’ vine, this earlier version contains not only different words but also a slightly modified version of the melody. Following the “Anacreon in Heaven” were additional arias and catches in both English and French, exploring the long and varied tradition in Western classical music of songs related to drinking. A trio sonata by Thomas Arne provided a brief musical interlude before the final piece on the program, the “Star-Spangled Banner” version owned by the library. The performance was well attended, with roughly 120 audience members. To say that we finished the season with a concert about a lie may itself be an exaggeration! Rather, “Apocrypha,” as the final performance was titled, combined anecdotes of forgery, mistaken identity, and anonymity with misattributed and spurious pieces of music. Some of the questions we explored included, “What happens when fate separates a work from its creator?” and “What meaning is gained or lost from a piece devoid of a clear history?” These questions invited audiences and performers alike to confront issues relating to creativity, ownership, and the way we assign value to artistic products. Featured prominently in this performance were the composing-singing-bards of The Oracle Hysterical. Using text from the “Passionate Pilgrim,” an anthology of twenty poems once falsely attributed to Shakespeare, members of The Oracle Hysterical forged a new cycle of eleven songs. There were two performances of this program in two different venues. The first took place at the Whitebox Art Center, a beautifully stark space composed of white paint and concrete. The second was at a private loft concert in Soho. Both performances were well attended for a total audience tally of roughly 120 people.

From this second season, we have learned a lot about the kinds of experiences we want to continue sharing with our audiences. Whether exploring a person, myth, or question, we are committed to crafting stories that capture listeners and propel them through the arc of a performance. As we design the flow of each concert, we make creative use of staging, props, narration, and interviews to better convey the inquisitiveness that motivates us as performers when delving into this music. Some might argue that all this activity is distracting and best left to the program notes. Does it serve the music to be adding what appear to be bells and whistles to the performance? As musicians, we are trained to hold the listener’s attention when the music begins, and to finds ways of directing that attention through our playing. But what happens when the piece ends? By taking the “program notes” and incorporating them as part of a program, we hope to create a more integrated environment that holds the thread of one’s attention even when the music stops. The end result is an immersive experience that not only brings listeners and performers together in the moment, but draws new connections between the past and the present.

With an inclination for eclectic projects, violinist Francis Liu specializes in performing contemporary works and period interpretations of Baroque and Classical repertoire. In addition to being co-founder of New Vintage Baroque, he has appeared at the festival “Dans les Jardins de William Christie,” working with members of Les Arts Florissants. He has also been on tour with the Baroque ensemble Musica Angelica and the actor John Malkovich in two productions, “The Infernal Comedy,” and “The Giacomo Variations.” Upcoming projects include performances with the Bach Players of Holy Trinity, the Sebastians, and the New York-based contemporary ensemble, Hotel Elefant. Mr. Liu has received degrees from Rice University, the University of Maryland, and the Juilliard Historical Performance program.