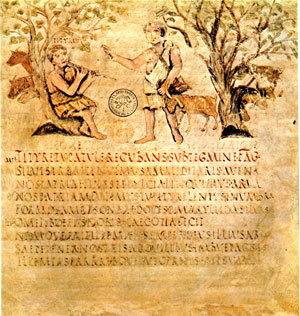 I've never been to a rock concert. I find the idea intimidating. I think I'll demand that they make everyone… What’s the most intimidating experience you have ever had? A one-on-one with an aggressively demanding boss? An IRS audit? Being pulled over by a traffic cop? A friend of mine recently shared such a daunting experience. Starting a brand new job heading up the marketing team at one of the big prestigious museums in London, my friend was introduced to one of the curators. Now curators at a major museum have a pretty exalted status and tend to be rather cerebral and just a bit precious. This curator was all of those things and more, but the intimidating part was when a second curator emerged and the two of them started to converse in fluent Latin. We are all used to having other languages spoken around us – Spanish, French, Russian, Chinese. But Latin denotes something else entirely. These days it is really the language of exclusivity, of elite education, and of a rarefied intellectual status. Even those who study it seldom speak it. My friend said that the effect was instantaneous. Immediately there was a feeling of inferiority, belittlement, and exclusion. There was an immediate desire to disappear behind a Roman vase forever.

All professions are a bit like that though. There is some type of initiation process, the successful completion of which is rewarded by entrance into the “club.” These fraternities speak their own special language (which insiders defend as “terms of art”) and confer status and power on initiates. The new “Latin” of our day has to be the argot of the financial services sector, which consists of words, phrases and acronyms whose sole purpose, it would seem, is to keep us guessing at the gates of understanding. (Which is why there are numerous online and published lexicons.) This jargon certainly seems calculated to defeat good communication. Just try rolling your mouth around words like arbitrage, fungible, delta, Chinese wall, quantitative easing, stagflation, and feathering. Or totally baffling acronyms such as ARM, OTC, ETF, ECM, IPO, SOL. Quite opaque, aren’t they?! Which is why the crash of 2008 remains such a bewildering catastrophe. The public to this day truly has little idea how or why this happened and what was contained behind that seemingly innocent word “subprime.” So what of classical music? Are we warm, fuzzy, and full of welcome to new audiences? Do we invite easy understanding and quickly satisfy the curiosity of new listeners? Do we introduce contemporary music in a way that allows a highly skeptical, if not hostile, audience to become familiar with new idioms? Do we provide reference points? Do we assist them in creating a relationship with sounds and ideas outside their experience? Do we break down that iron curtain of separation, the stage, so that audiences can get up close and personal with fascinating performers?

As musicians, presenters, and managers we tend to promote on a default basis the mystery and ritual of a concert experience whose format inevitably excludes. The traditional performance model is intended for the initiated, for the few members of the “core audience” who are musically highly educated and experienced. From them, we assume understanding of the most erudite contemporary works and an appreciation of the subtleties and nuances of a performance. But that core audience, never large to begin with, is shrinking if not disappearing. The Knight Foundation, in a major survey conducted just a few years ago, estimated this audience at only 3.4 percent of all concert attenders, and yet the overall experience is still targeted almost exclusively at this elite.

So what do we do with the other 96.6 percent of our audience? What type of relationship do we have with them? How do we foster a relationship with listeners who are not presently in our orbit or who have attended a park concert and liked the experience, or come across some classical music in a movie that has ignited a new passion? Perversely, we confound them with a concert experience that seems designed to intimidate.

Just take a look at the websites of the major opera houses or symphony orchestras. They are designed as the musical equivalent of insider baseball. The inaccessibility and expense of tickets. The rigid conventions of dress. The need for listeners to educate themselves before they even arrive at the event or at the event itself. Or take a look at program books. Very often the program note writer has produced a brilliant academic essay on the works about to be performed which assumes a graduate musical education. Then there is concert ritual. The imposed suppression of any reaction by the audience – no laughter, no talking, no walking, no nothing – just reverential frozen sitting. And the musicians’ concert attire suggesting that nothing has changed since 1870. The reaction from the stage is “frozen” as well. A rigid tableau with little communication from musicians to the audience other than through sound. I sometimes wonder who the performance is for. Other musicians or is it really for the paying audience? No communication from the conductor who turns his back on the audience for most of the evening. (An exception may be the conductor who is persuaded to say a few words of welcome or perhaps offer some explanation but this is usually limited to special occasions designed for the uninitiated.)

But my point is that any audience is largely uninitiated. Listeners’ experience of music, of the standard repertoire, is limited. Their experience of playing an instrument at some point in their lives is probably perfunctory and distant, if not nonexistent. Inevitably, this leaves a vacuum of understanding and deprives an audience of the touch points that make a live concert event meaningful. And if mature audiences find concerts puzzling, think of the young people (by young, I mean anyone under the age of 40.) The experience could easily be a turn-off for them, something so unpleasantly foreign that they never return.

It’s what the Knight Foundation calls the “vehicle of delivery,” meaning nothing wrong with the music, Beethoven symphonies are still great, but the way we present all this is a formidable barrier to audience retention or development. Could it be that the concert hall is the major problem? Most auditoriums were designed at a time vastly different from our own and the new halls tend to replicate the old models and, therefore, the experience. Instead of the audience coming to us, to the formal concert hall with all its intimidating features and ritual, why don’t we go out to them? To town halls, gymnasiums, schools, public spaces. The acoustics will be a challenge certainly. And, yes, there would be lots of logistical nightmares to overcome. But music would be placed front and center in a community with full community involvement and pride and ownership. And programs would reflect the needs and desires of the new audience. I have often thought that park concerts (such as the one in photo above) are the most important part of any musicians’ work and yet they are generally abhorred because the musical experience for the musician is so compromised. But the experience for the audience, the sense of occasion, the joy, the energy, the feeling of connection with the performance, is so huge that such events have to be on the list for further development.

So… am I suggesting dumbing down? Laser shows during Brahms Four, or dancing fountains in the last movement of Bartók Sixth Quartet? Nope… I am not. I love music and musicians much too much to suggest any such thing. But I am suggesting that we think about the problems we live with and come up with new directions. These ideas should most definitely not be handed over to the Marketing Department. Marketing people are wonderful and deeply creative but their approach is not the panacea. The panacea is the musicians themselves and how they want to communicate their art and the extraordinary repertoire which is everyone’s inheritance. If musicians take ownership of this challenge and the potential solutions we could go in all sorts of directions.

Indeed… I am delighted to say that many young musicians already get this and many established artists too (just think of the trailblazing by the Cleveland Quartet in years past) such as Fifth House Ensemble (in photo right) , eighth blackbird, conductors like Alan Pierson and his ensemble Alarm Will Sound, chamber orchestras like A Far Cry, string quartets such as the Parker, and soloists like Matt Haimovitz. Their approach is all about research and development, about new ideas that are sparking new interest and new audiences. It is not acceptable for the rest of us to sit on our complacent laurels and blame the public for not understanding. It is our responsibility to preserve our art form and to take it to the centre of society, rather than see it languish on the periphery as a “minor entertainment for the privileged.” I don’t want music to be up there with Latin. It’s an experience of the people, by the people, for the people, which we really don’t want to perish.