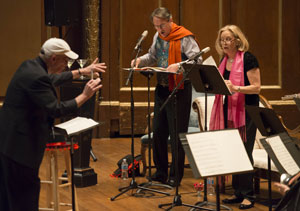 Recently my wife and I found ourselves involved in multiple rehearsals and a performance of Façade, a musical extravaganza composed in 1923 by the English prodigy, William Walton on the hallucinogenic poetry of Edith Sitwell. It was a mesmerizing experience on many levels. As the speakers, our performance was prepared by the composer and conductor John Heiss, a long-time and much respected NEC faculty member. (Stravinsky called him “the Pitch Doctor” – because he could hear even more sonic details than the composer!) John, in his quiet, totally dedicated and committed way, was absolutely demanding of the very best from us and the Contemporary Ensemble musicians performing with us. Given my schedule I was very much of a mind that well…if it’s good enough then it’s good enough. John’s approach was never to compromise. Good enough was merely a way station on the road to doing even better, and even better meant that there were at least 10 more levels to strive for.

It reminded me how we are all prone to plateau in our endeavors, because we don’t have such constant critical prodding and feedback. So our tennis, golf, snooker, running, weightlifting attain a certain level, but then get stuck. Musicians–at least the best of them–are not and cannot be like that. (One of our young brilliant violinists recently complained of a “rave” review because there was nothing critical he could learn from it). They strive continuously, seek criticism, advice, new ideas, and then they work…with passion and for a definite goal. It is that sense of self-challenge, of self-criticism, of wanting to go further, deeper, into a work they are studying or writing themselves, that makes musicians such creative artists and such unique individuals.

If I were running a major corporation I would make a point to consider only musicians for all senior creative appointments. Just consider what they can bring to the table: A work ethic that knows no compromise. Problem solving from all those countless rehearsals. Analytical skills that can make sense of the most complex score. Then, there is their memory. Can you imagine having prepared and memorized a complete opera lasting three hours, or a solo recital programme lasting an evening, or a concerto with full orchestra? And what about performing charisma, that wonderful Greek word meaning literally a gift from the gods, capturing an audience in thrall of their magic. Ears….. what about ears? Musicians’ ears–especially jazz players and contemporary improvisers–are more finely tuned than a world class racing car. Then, there’s the experience working in groups, be it trios, quartets, opera, jazz, chamber orchestra, or a full symphony. These ensembles are complicated structures, requiring team leadership, conflict management, give and take, blending of sound, AND a sense of humor.
To these qualities, we can add the dedication to achieving a goal, with clear objectives and a strategy through rehearsals that leads to the ultimate metric of the performance. And think of what goes into a performance: the energy, the experience of music and life, the soul-baring, and the courage to take risks even if the result is a failure. In fact, maybe failure is a blessing because there is more to learn from its resonance than the fait accompli of success.

In spite of all these “marketable” attributes, today’s musicians face greater demands than ever before. (And this is true for all creative artists.) It’s not enough simply to play well.

It’s no longer enough to win a major competition (as Van Cliburn so famously did in 1957) or a plum job in an orchestra. None of these guarantees that things will fall into place, that success is assured, without the necessity to build the foundation and structure of a self-made career. Indeed, I find much concern and often frustration from competition winners because their huge expectations and initial excitement are not being met. Artist managers toy with possibilities and dangle ideas that don’t come to fruition. Then there are those elusive orchestral or opera jobs, with literally hundreds of applicants eyeing every single slender opportunity on offer. And even once attained, these positions are now no longer as secure as they once were. But despite all this, I sense and I experience huge optimism in the music world. The old structures are being forced to change. The role of a musician is now being defined more broadly and probably more excitingly than ever. And there are new performance opportunities, and new ways to penetrate the community and attract diverse audiences. The sense of energy and excitement is palpable, as musicians define for themselves “portfolio careers,” which can embrace a myriad of skills from performance, to teaching, to composing, to arranging, and…yes… being an entrepreneur in the changing world of arts and entertainment.

In this next series of blogs I will be inviting some of my colleagues to tell of their own experiences or discoveries as musicians, teachers and entrepreneurs. I hope to map the new pathway that is emerging, a pathway that utilizes the very best of that astonishing skill set and talent that belongs to musicians.