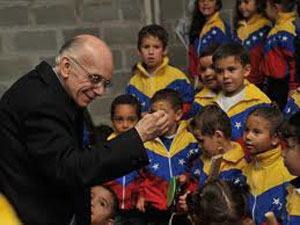 El Sistema is one of the greatest teaching phenomena in the world, and it was created some 35 years ago in Venezuela through the inspiration and vision of one man, Dr. Jóse Antonio Abreu. The system is based upon intensive daily music training in an after-school program offering students individual instruction and performance in large ensembles and orchestras. It began all those years ago with 11 young musicians in a garage playing through some music. Today, it touches the lives of more than 300,000 young people throughout Venezuela, the majority of them from the most economically deprived areas.

In 2008, I made my first visit to Venezuela to see El Sistema firsthand. I had seen the feature 60 Minutes had done and, by then, I had also heard several colleagues’ reports about the miracle that was happening in this developing country. But nothing prepared me for the powerful impact of music and music-making I experienced. Our tour group was composed of about 20 people — board members, community partners, music educators, government leaders, and (we hoped) future funders. We spent an intensive five days visiting nucleos (the after-school centers that are the foundation of Venezuela’s program) in and around Caracas. We also had the opportunity to meet with Dr. Abreu and we were privileged to hear his vision and to seek his advice on how we could help such a program emerge in the United States. Everything we saw, everything we heard, was transformational, passionate, emotional, committed. It reminded us all of the power of music to change lives.It made me, at least, acutely aware of how much the so-called developed world had forgotten about the potency of this great art form, our having allowed its power and magic to reside with a small elite rather than the community at large.

The inspiration of this visit brought our study group back together on several occasions to first “decompress” and then to consider developmental ideas for the new initiative that was already blossoming in this country. We concluded that for nucleos to succeed we needed new types of citizens, teachers and artists to become their inspired leaders. And that is where the idea of the Sistema Fellows started.

Dr. Abreu supported our objectives and ambitions with all his heart, so when he was honored with a TED Prize in February 2009, he made the establishment of the Fellows program the focus of his award. In his “Wish to Change the World,” he said, “I wish you would help create and document a special training program for at least 50 gifted young musicians, passionate for their art and for social justice, and dedicated to developing El Sistema in the U.S. and in other countries.”

Galvanized, we put together a five-year plan in just a few short, dizzying months. We raised nearly $500,000 and welcomed the first class of Fellows in October 2009.

That first group of 10 was just amazing. They got it. They had a different mindset, new passions a new vision. The nine-month training program took them to Venezuela for two months, not to observe but… to work. Hands on doesn’t begin to describe their experience. And this has continued with Classes Two and Three and we have just welcomed the Fourth class, which means a total of 40 outstanding young leaders on a mission to change the world through music. You can share some of their experiences by following these links: The training for the Sistema Fellows lasts nine months and is based at New England Conservatory. The curriculum is what I would describe as a balanced mix of teaching and entrepreneurship, focused upon providing the skills, at all levels, these new leaders will need in the field. There are short internships around the country, but the centerpiece has to be the immersion in Venezuela, working at the source. I go down to Caracas every year to see the Fellows finish this part of the training and every year I see the same looks on tired exhilarated faces of total transformation. Yes, they had read about it. Yes, they had seen the videos. But nothing had prepared them for the experience of El Sistema.

Now they are ready to take on the world, and figure out what the program needs to flourish and develop in North America. Not a replication of El Sistema in Venezuela, for that serves needs unique to that country, but projects (and, yes, I used the plural because this is a very de-centralized, viral movement) that are geared to the circumstances and demands of individual communities in the U.S.

Each program is different, but each shares the fundamental principles of the El Sistema method — a trust in the power of music, intense and consistent immersion, an emphasis on excellence, warm nurturing of the individual child, and the potent bonding experience of ensemble performance. Whether it’s orchestral music or choral singing, these programs are dedicated to creating social change in our country — something about which we still have so much to learn.