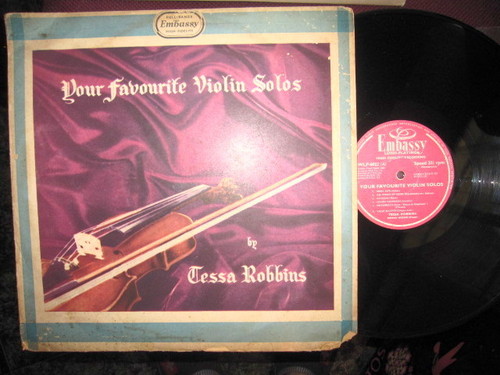 Do you know the French phrase “coup de foudre?” It literally means “hit by lightning” and it’s often used to express love at first sight. In The Godfather: Part 1, the young Michael Corleone suffers a “coup de foudre” when he spies a beautiful young woman in sun-drenched Sicily. He marries her, of course, and then… well, you know the story. My coup de foudre was Corleonesque but not inspired by the charms of the opposite sex, but by music. It hit me like a thunderbolt when my father brought me my first black vinyl of a young English violinist, Tessa Robbins, playing short virtuoso encore pieces. Yes, as simple as that. Sound, music, magic, and much repetition. When it happened, it changed my life. There was no going back. Not only did I need music in my life, but I wanted to be in music, to be a performer. This all happened as I was approaching my teenage years in the U.K. and the unfortunate, or rather inconvenient, thing about this love affair, was that I had already set course academically to study science. Music was not on the schedule and the education system in the U.K. is far more inflexible than in the U.S. and pressures you to make choices before you are really mature enough to make those big commitments. (I watched my son go through the U.S. systems and the choices and the flexibility are among the great strengths of the secondary and tertiary curricula.)

But back to my dilemma. I was playing a great deal of music, studying it after school, but I couldn’t really expression my passion. I was a sort of closet musician! As my love for the art form grew and grew, my need for it began to dominate my school life until one day it erupted as one of those tearful confessions you see in Hollywood movies. My confession was to the principal and the head of music, and I asked with every fiber of my being to make music my principle areas of study. I must have been having a good communication day because they not only heard me but understood me and — took pity on me — rescheduling my entire academic life and allowing my musical fantasy to become a reality.

Then the next main development happened. I discovered one of the most important people in my life, an inspired and devoted teacher, Stan Beddows, who spent two whole years bringing my musical education up to speed. This was done mostly one-on-one in long sessions in a large empty classroom. He challenged, cajoled, provided copious ideas and suggestions, and was my mentor and guide. He showed me how to penetrate a whole new architecture — that of musical form, theory and history. Hopefully, everyone has had such an inspired teacher in their lives. It is rare when it happens, but you never forget the experience or the effect it has on your entire life. Mr. Beddows (I could never call him Stan even though he pleaded with me when I was in my 40s!) was the type of teacher who wanted you to learn, experience deeply, take everything you could from him because everything was being offered unconditionally, and then give you the freedom and independence, and validation to get on with it your way. I loved that. One of the wonderful teachers at NEC, cellist Laurence Lesser, tells his new students at their first lesson: “My objective over the next few years is for me to become redundant as your teacher.” What could be more exciting, more powerful?

I should have mentioned right at the start that my family and I were living in one of the most remote parts of rural Wales, and if you need coordinates for this, it’s not even a fly over area. It’s just mountains, rivers, and sheep way to the west of the U.K. Anyway, the opportunities to hear music live were as remote as the location, but when those indescribably, emotionally visceral moments happened (the occasional touring string quartet, a visiting chamber orchestra, an odyssey by an itinerant violinist), the effect upon me was instantaneous and physical. I have never taken drugs but I can only imagine that even a combination of the most powerful mind-altering substances would not come close to my experience. I was totally addicted. Constantly tuned to the BBC’s Radio 3 — still the most astonishing station on the planet — I consumed music with the thirst of a parched Saharan pilgrim. I positioned two radios on either side of the room and convinced myself that the sound was in stereo. And Radio 3 could take you anywhere, from the great symphonic scores to jazz, rock, even analyses of the Beatles’ songs. This was where I first heard “She’s Leaving Home,” a song that can still stop you in your tracks for sheer unutterable beauty and originality.

If you were to go back in time and observe me then… well, I had become music.