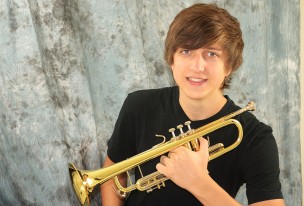 Christopher Danz, a native of Germany, is currently a senior at the Eastman School of Music studying with Professor James Thompson. His former trumpet teachers include Moritz Mainusch, David Dash, Mary Bowden, and Matthew Sonneborn.

After moving to Florida in 2011, Christopher participated in the Artis Naples Philharmonic Youth Orchestra where he played principal trumpet for three years. A recent graduate from Golden Gate High School, he performed in the Jazz and Marching bands. Starting 2012 he attended the Bower School of Music at the Florida Gulf Coast University as part of a dual enrollment program. During this time Christopher played in the Wind Orchestra, a Brass Quintet and a Trumpet Ensemble. With the Brass Quintet he had the honor to perform in a concert with the Boston Brass. 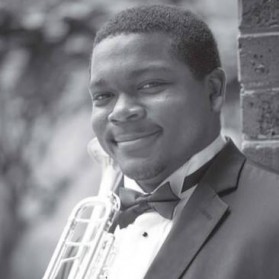 Peyton Johnson is currently a senior at the Eastman School of Music studying under James Thompson, retired principal trumpet of the Montreal and Atlanta Symphonies. He began his studies on the trumpet at the age of 11. His private studies began with James “Bull” Canty of the Long Bay and Florence Symphonies. During this time, he was awarded placements in All-County, All-Region, and All-State Bands. For his junior and senior year of high school he attended the South Carolina Governor’s School for the Arts and Humanities. While at the Governor’s School for the Arts and Humanities he participated in the Sinfonia Chamber Orchestra, Wind Ensemble, Jazz Ensemble, Brass Quintet and Jazz Combo. Peyton has placed in the South Carolina All-State Band and All-State Jazz Band multiple times throughout his career there and was a participant in the Brevard Music Center in 2013 where he studied with Mark Hughes of the Houston Symphony, Neal Berntsen of the Pittsburgh Symphony, and Mark Schubert of the Honolulu Symphony and Baylor University. His other orchestral experience includes performing in the All County Orchestra and the Carolina Youth Symphony in Greenville, SC.

Since his time at The Eastman School of Music, he has performed with the Eastman School Symphony Orchestra, Eastman Wind Orchestra, and the Eastman New Jazz Ensemble. Both his first-year and sophomore year, he was a member of an Eastman Trumpet Ensemble that went to the Large Ensemble Division of the National Trumpet Competition. As a junior, he will begin his stint with the famed Eastman Wind Ensemble and Eastman Philharmonia. During the summer of 2016, he was a participant in the Eastern Music Festival. There he worked under the baton of Maestro Gerard Schwarz of the Seattle Symphony and performed and studied with Chris Gekker, Jeffery Kaye, and Judith Saxton. After completing his Bachelor’s Degree in Music Performance and Education, he plans to pursue a Master’s and Doctorate in Trumpet Performance. He plans to be a Trumpet and Brass educator at the college level while maintaining an active performing career in as many musical genres as possible! 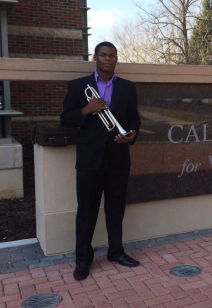 Jonathon Pitts is currently a senior at the Eastman School of Music, where he studies with Professor James Thompson. He is a recent graduate of Liberty High School in Kissimmee,FL.  While attending Liberty High, Pitts was principal trumpet in the Wind Ensemble and lead trumpet in the Jazz Band for four years. He also managed to place in the Florida Music Educators Association All State Concert Orchestra in 2012 and the All State Symphonic Orchestra in 2013-2014.

He has been awarded numerous times on a local and national level. Recently he won the brass division of the Bach Festival Concerto Competition in Winter Park, FL. Pitts was also featured as a soloist in the Semi-Final round of the National Trumpet Competition during two consecutive years.  His primary teacher during high school was Christine Lundahl, Director of Bands . He also had the opportunity to study with Chad Shoopman, Robert Hinkley, and John Almeida-Professor of Trumpet at the University of Central Florida. 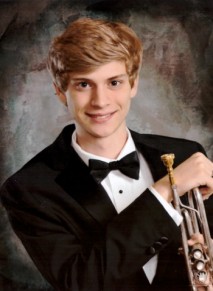 Matthew Suckling is currently a senior at the Eastman School of Music studying with Douglas Prosser. He is a graduate of Cornwall Central High School in Cornwall, NY. At Cornwall, Matthew performed in the Concert Band, Jazz Ensemble, Pit Ensemble, and Mixed Choir. Throughout his time in Cornwall Matthew studied with Dr. John Charles Thomas of the Chestnut Brass Company. In high school, Matthew had the honor to perform in the NYSBDA Jazz Ensemble, the NY All-State Jazz Ensemble, and as lead trumpet in the NAfME All-National Jazz Ensemble. 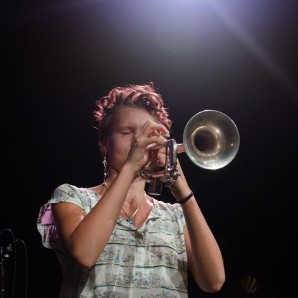 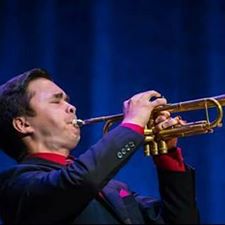 Jarod Lau is a Junior at the Eastman School of Music, studying trumpet with Doug Prosser.  A native of Rochester, NY, Jarod is a proud product of the Eastman Community School of Music, where he studied extensively with Wes Nance throughout high school.  Throughout his high school career, Jarod performed with a variety of noteworthy ensembles, including the NY Allstate concert band & orchestra, the NAfME Nationals Honors Band, was also a semi-finalist in the National Trumpet Competition. Summer Programs that Jarod has attended include the Eastman Summer Jazz studies and the Eastman Summer Trumpet institute.

Jarod has had an active role in classical large ensembles as well as the Eastman Jazz Workshop ensemble and New Jazz Ensemble. He has taken part in several chamber ensembles of various styles. In addition to studying trumpet Jarod has studied Secondary Voice under the direction of Sarah Vandenbrink.
Jarod has also participated in apprenticeships at the Atlantic Brass Quintet Summer Seminar and Hot Springs Music Festival. 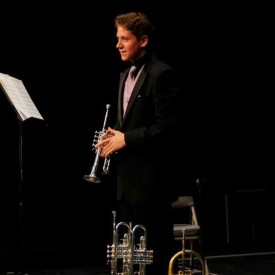 David Puchkoff is a native of Poughkeepsie, New York, and is currently a junior at the Eastman School of Music.  He is studying Trumpet Performance under James Thompson. He most recently performed with the BU Tanglewood Institute Young Artist Orchestra where he played principal on works that include Bartok Concerto for Orchestra.  In high school, David was featured as a soloist in the semi-finals of the National Trumpet competition. He is an alumni of the Empire State Youth Orchestra. David was presented with the Louis Armstrong jazz award, John Philip Sousa band award, Essentially Ellington Outstanding Soloist award, and the Berklee HSJF outstanding performer Award 2 years in a row.  When David is not involved with music he likes to hike, cook and sail. 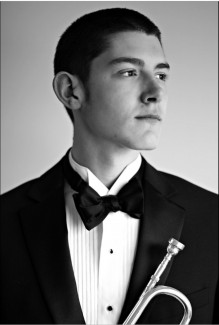 John Chadwick Rockwell, III from Albany, NY, began his musical studies at the age of five on piano and at the age of eight started trumpet lessons under Steve Lambert. Upon entering high school, Chad continued his studies under Dennis Johnston, PhD. Throughout his middle and high school years Chad found his passion for music through his participation in numerous ensembles and opportunities in his community including NYSBDA, NYSSMA, the Empire State Youth Orchestra, as well as the Niskayuna high school’s Jazz Ensemble, Orchestra, and Band. As well as being a performer, he was a teacher of several students throughout high school. Chad is now entering his sophomore year at the Eastman school of Music in Rochester in the studio of Douglas Prosser. 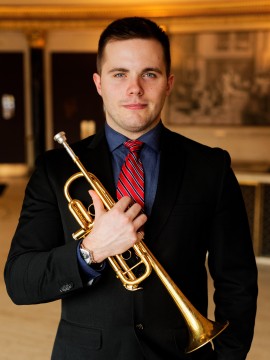 Currently a sophomore performance major at the Eastman School of Music, Jacob DeGuire has studied with musicians such as Clay Jenkins, Douglas Prosser and James Thompson.

A 2012 graduate of South Lyon High School in South Lyon, Michigan, Jacob received the Louis Armstrong Jazz Award, Outstanding Musician Award and Michigan Youth Arts Festival Wind Symphony Award during his high school career. Soon after graduating, he earned a position within one of the two Washington, D.C. ensembles that the Marine Corps has to offer. Upon the completion of combat training, he took on multiple musical and military roles within The Commandant’s Own, United States Marine Drum & Bugle Corps.

While in the ensemble, Jacob has successfully completed four National Installation Tours that stretched from San Diego, California to Pensacola, Florida, performed in tandem with the New York Philharmonic, performed music for guest of honor President Barack Obama, provided Taps for Marines laid to rest at Arlington National Cemetery, featured as a primary soloist and carried out the daily responsibilities that of a United States Marine. 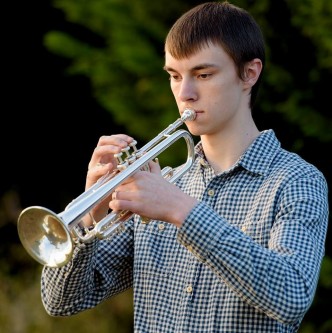 Nicholas Baronowsky is a first-year dual-degree student studying Trumpet Performance at Eastman and Physics & Astronomy at University of Rochester. A native of Clarksville, Maryland, Nick has performed with numerous prestigious ensembles at the county and state levels. These include the Howard County GT Jazz Ensemble, Orchestra, and Band, as well as the Maryland All-State Junior and Senior Bands and the Baltimore Symphony Youth Orchestra. Nick has also worked with young musicians in the community as a student assistant at the Encore Summer Music Camp, and a staff member at the inaugural Maryland Summer Trumpet Institute. His teachers include composer, educator, and Eastman graduate Andrew Spang, Joe Fischer, and former Baltimore Chamber Orchestra principal trumpet Brent Flinchbaugh. Nick currently studies with Douglas Prosser at Eastman. 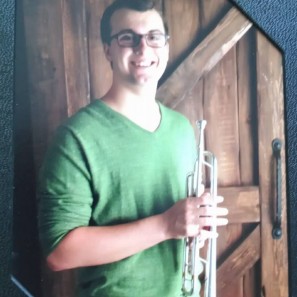 Patrick Clarke is currently a First-year Undergraduate Student studying with Professor James Thompson at the Eastman School of Music. While at Eastman, Patrick has already performed in a variety of settings, especially under the baton of Dr. Mark Davis Scatterday in the Eastman Wind Orchestra.

A resident of St. John’s, Florida, Patrick has been playing the trumpet for almost 10 years. Patrick’s former trumpet teacher was Mr. Brian Urso of Jacksonville, Florida. Patrick is a graduate of Bartram Trail High School in St. John’s, Florida, where he was an active member of the school’s music program. Patrick was Principal Trumpet of the Wind Symphony and Symphonic Band; a member of the school’s Jazz Ensemble; as well as a Mentor, Section Leader, and Brass Captain of the Marching Band, all under the direction of Mr. Jason Duckett. Additionally, Patrick has served as Principal/Co-Principal Trumpet of the Jacksonville Symphony Youth Orchestra for four years.

During his years in high school, Patrick also participated as both a soloist and a member of several brass quintets, performing repertoire such as Ewald’s “First Brass Quintet in Bb Minor” and Arutunian’s “Concerto for Trumpet and Orchestra”. Furthermore, Patrick Clarke performed in a variety of Florida All-State Ensembles, playing fantastic pieces such as Julie Giroux’s “La Meztiqua de Córdoba”.  While at Eastman, Patrick hopes to continue to hone his craft as a musician, as well as, study to become a music educator. 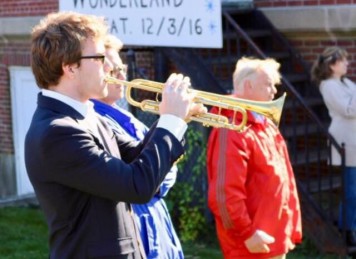 Dan Jones, from Wading River, New York, is currently a first-year at the Eastman School of Music, studying under Professor James Thompson. He has studied and taken lessons with Wynton Marsalis, Mark Gould, Tim Wendt, Mike Rubenstein, and Paul Piekut. He is a graduate of Riverhead High school in Riverhead, New York, and participated in many youth orchestras and bands on Long Island such as The Metropolitan Youth Orchestra of New York, and The Nassau Suffolk Performing arts Wind Symphony. He has participated in many festivals, from local to statewide, in both classical and jazz. In his senior year, Dan was given honorable mentions in the North Shore Symphony Orchestra’s young artist competition, which was open to high school age students of any instrument who resided on Long Island.

Dan, who was also a Boy Scout, achieved the rank of Eagle Scout in June 2017, and is a proud member of Troop 94, Wading River, New York. His Eagle Scout Project was the construction of a pathway at Calverton National Cemetery to help the disabled. He also served as his troop’s bugler for 6 years. Through Boy Scouts, Dan got involved with kayaking and hiking,which he likes to do in his free time. 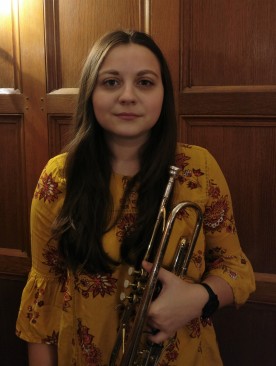 Giulia Rath, a native of Austria, is currently a first-year at the Eastman School of Music studying with James Thompson. She graduated from a music high school in Vienna in 2017. At the high school she performed in the Symphony Orchestra, Brass Ensemble and Mixed Choir. Additionally, Giulia went to the Joseph Haydn Conservatory in Eisenstadt where she had lessons with Reinhold Ambros, member of the Vienna Philharmonic Orchestra, and Josef Bammer, member of the Tonkünstler Orchestra.

In 2013 and 2015 Giulia took part in the Austrian-wide competition “Prima la Musica” winning 1st place twice. She was also a member of the Austrian Youth Symphony Orchestra and went to the Orchestra Camp “Amici Musici”.