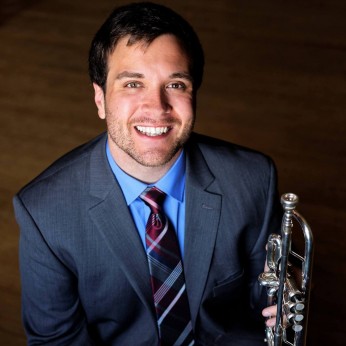 Currently residing in Rochester, New York, Steve Felix is a third-year doctoral student at the renowned Eastman School of Music.  He received his Master’s degree in Trumpet Performance from the Eastman School, and a Bachelor’s degree in Trumpet Performance & Music Education from the University of Massachusetts Amherst. An avid soloist, Steve has performed in competitions on the national and international level.  Most recently, Steve was awarded first place in the graduate solo division  of the 2015 National Trumpet Competition, performing the fourth movement of Anthony Plog’s Concerto No. 2 for Trumpet & Orchestra.  In 2011, he was awarded second place in the undergraduate solo division, performing the first movement of John Stevens‘ Sonata for Trumpet and Piano.  Steve has also been the recipient of three, consecutive scholarships from the International Trumpet Guild, from 2008-2010.  During the summer of 2011, Steve attended The Center for Advanced Musical Studies at Chosen Vale, a two-week long annual seminar, where he studied with some of the world’s most iconic trumpet soloists.  Steve has also been both the recipient (M.M., 2015) and nominee (D.M.A., 2017) of the Eastman School’s prestigious Performer’s Certificate, an honor awarded only to students of the highest level of performance.  As an orchestral musician, he regularly performs with numerous symphony orchestras, including the Rochester Philharmonic, the Albany Symphony, and the Syracuse Symphoria.

As an educator, Steve currently serves as a chamber music coach at the Eastman School of Music, while also successfully maintaining and recruiting for a studio of primary, secondary, and collegiate level students through the University of Rochester and the Eastman Community Music School.  While teaching in Massachusetts, he served as trumpet instructor at the prestigious Deerfield Academy in Deerfield, MA, and many of his students went on to hold top positions in all-district and all-state festival ensembles.  Along with teaching privately, Steve also teaches publicly as an active clinician.  His clinic, entitled “Basics in Brass,” is designed to offer a simplistic and effective approach to playing a brass instrument.  Steve is an active recruiter and ambassador for community outreach for the organizations and institutions that he is affiliated with.  In March of 2016, Steve co-coordinated and co-hosted a two-day regional trumpet festival at the Eastman School, helping bring the esteemed talents of Mark Gould, Brian Shaw, Bob Malone, and Wayne Tanabe to the greater-Rochester and Eastman communities.

Steve has also served as Choir Director for his chapter of Phi Mu Alpha Sinfonia at the University of Massachusetts (of which he is also a founding brother), and also as inaugural President of the Pioneer Valley Trumpet Guild, a student-run affiliate chapter of the International Trumpet Guild.  Steve’s primary teachers include Paul Sundberg at Williams College (2003-2007), Eric Berlin at the University of Massachusetts Amherst (2007-2012), and currently James Thompson at the Eastman School of Music.  His successes as a student, musician, and person can be directly attributed to the tremendous support of his family, friends, and mentors.

Steve is the current doctoral teaching assistant of the Eastman Trumpet Studio, and also serves as the classical trumpet intern for the Eastman Community Music School.

More information about Steve can be found at www.scfelix.com. 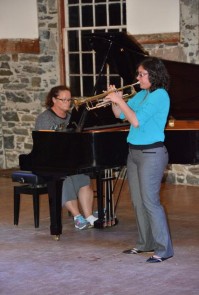 Erika Izaguirre is a third-year doctoral student at Eastman School of Music, where she studies with Professor Thompson. Prior to beginning her studies at Eastman, Erika received her Masters of Music at Baylor University under the guidance of Wiff Rudd and Mark Schubert. During her time at Baylor, Erika was a member of a trumpet ensemble that won first prize in 2013 and third prize in 2014 at the National Trumpet Competition. She also has a Bachelor of Music Degree from the University of Texas at Austin where she studied with Ray Sasaki. As a soloist, she has participated in several competitions and has attended the Chosen Vale International Trumpet Seminar. 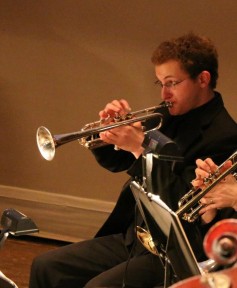 Ethan Urtz is a third-year doctoral student at the Eastman School of Music.  Ethan received his bachelor’s degree from Ithaca College and his master’s degree from the Frost School of Music at the University of Miami.  A native of Syracuse, he has performed extensively throughout Central New York with groups such as Symphoria (the successor organization to the Syracuse Symphony), the Cayuga Chamber
Orchestra, and at the Finger Lakes Musical Theatre Festival. 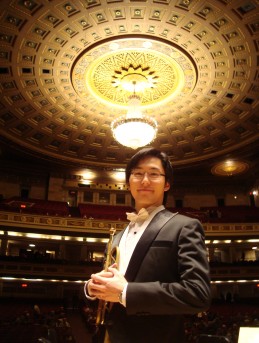 Chun Kong (Apollo) Lee is a second-year doctoral student at the Eastman School of Music. He holds a Bachelor of Music (Honors) Degree and a Performance Diploma from the Hong Kong Academy for Performing Arts (Hong Kong), Graduate Performance Diploma from Boston Conservatory (Boston, MA), and a Masters of Music Degree in Trumpet Performance from the Eastman School of Music (Rochester, NY). Apollo’s most influential teachers have been James Thompson, Edward Hoffman, Steven Emery, Jonathan Clarke and Merrill Debski.

From 2010 to 2012, Apollo served as principal trumpet of the City Chamber Orchestra of Hong Kong. In 2006 and 2007, he was one of the selected trumpeters for the Asian Youth Orchestra which toured and performed in many major symphony halls in Asia. Apollo is a very active and diverse free-lance musician who has appeared internationally in symphonic, opera, ballet, chamber music, film music, and musical theater productions. As an orchestral trumpeter, he has appeared frequently with professional orchestras such as the Hong Kong Philharmonic Orchestra and the Hong Kong Sinfonietta Orchestra in Hong Kong, the Macau Orchestra in Macau, Cape Symphony Orchestra in Cape Cod, Plymouth Philharmonic and Haffner Sinfonietta in Boston.

Apollo is also a passionate and dedicated instructor who loves working with students of all levels and sharing the knowledge of trumpet playing. He has formerly been the band conductor and brass instructor at S.K.H. Bishop Baker Secondary School (Hong Kong), high brass instructor at Po Leung Kuk Lee Shing Pik College (Hong Kong) and Chinese Methodist School North Point (Hong Kong), and private trumpet instructor at Macau Youth Symphony Orchestra (Macau). Apollo has also served as the trumpet faculty of the Education Institute of Hong Kong. While studying in the Boston Conservatory, Apollo was hired as a brass department teaching assistant. 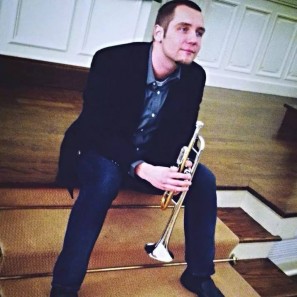 Jared Wallis is a first-year doctoral student and the Baroque Trumpet teaching assistant at the Eastman School of Music. A native of Talala, Oklahoma, he graduated with the highest honors from the University of Kentucky where he studied with Jason Dovel.

As a student, Jared has performed on both modern and natural trumpets at the International Trumpet Guild conference. He was also selected to present his research Period Performance Practice on the Baroque Trumpet at the 2014 National Conference for Undergraduate Research. Jared has made multiple appearances in the semifinals of the National Trumpet Competition both as a soloist and in ensembles. In 2014 his quintet was awarded second prize in the ensemble division.

In his summers Jared has attended the Natural Trumpet Building Workshop in Bloomington and the Raphael Mendez Brass Institute in Denver. He has spent numerous summers as a counselor at the Blue Lake Fine Arts Camp where he performs regularly with the Festival Band, Festival Orchestra, and Staff Brass Quintet. 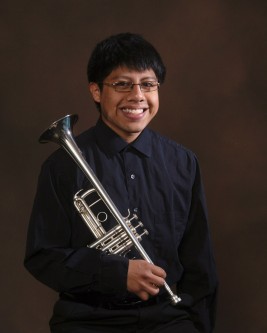 Bryan Kraak is a second-year masters student at the Eastman School of Music. He is in the studio of Professor James Thompson. Prior to Eastman, he attended DePaul University where he received his Bachelors in Music Performance. While at DePaul, Bryan studied with William Denton (principal of Lyric Opera) Matthew Lee (active freelancer), Matthew Comerford (third in Lyric Opera) and Tage Larsen (fourth in Chicago Symphony). Bryan has performed at Symphony Center in Chicago with the DePaul Wind Ensemble and the DePaul Symphony Orchestra.  Bryan has performed in Master classes that included Timur Martinov (principal Trumpet of Marinsky Theater Orchestra) and Chris Martin (principal Trumpet of New York Philharmonic)

Bryan was able to gig around in the Chicago area while doing his undergrad. In addition, he has been able to freelance in the Asheville NC area, his hometown; playing in jazz groups, orchestras, brass quintet/quartets, and soloing. 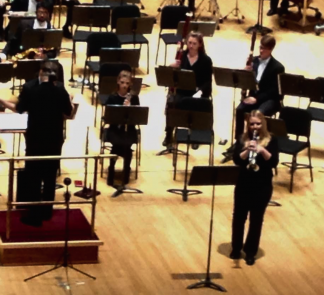 Michelle Kraak is a first year masters student at the Eastman School of Music studying with James Thompson. Previously, she graduated Suma Cum Laude from DePaul University, with a Bachelor’s degree in Trumpet Performance. At DePaul she primarily studied with William Denton (principal trumpet in the Lyric Opera), Matthew Comerford (third trumpet in the Lyric Opera, and Matthew Lee (active Chicago freelancer). While in Chicago, Michelle performed at Symphony Center and on Windy City Live with the DePaul Wind Ensemble. She also was able to freelance while in Chicago, playing in orchestras and churches. Additionally, Michelle performed in masterclasses given by Chris Martin Principal of the New York Philharmonic, Timur Martynov of the Marrinsky Orchestra, and Bob Sullivan, professor at Northwestern University. She has also studied with Dennis Najoom, the Former Co-Assistant Principal Trumpet of the Milwaukee Symphony Orchestra.

Michelle has also taught students of varying skill levels and ages. Michelle currently is a trumpet intern at the Eastman Community Music School, where she teaches trumpet students in the surrounding area. She also served as a brass instructor at Charles D. Owen High School, and assisted in teaching lessons and sectionals with the Sheboygan Falls Middle School eighth grade band. 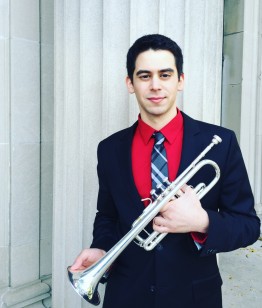 Keaton Viavattine is currently a first-year masters student in Trumpet Performance at the Eastman School of Music. Before beginning his masters, Keaton earned a double degree in Music Education and Trumpet performance from the Eastman School where he studied with Professor Douglas Prosser of the RPO.

Keaton has recently participated in several competitions and summer festivals including the National Trumpet Competition and the prestigious Chosen Vale Summer Institute, where he performed in masterclass for Clement Saunier of the Ensemble Intercontemporain.
As an educator, Keaton is active within the New Horizons program through the Eastman Community Music School where he serves as the Trumpet Sectional Mentor as well as director of the “Antique Brass” Ensemble.