•Steve Felix, a second year masters student in the trumpet studio, was awarded first prize at this year’s National Trumpet Competition at Messiah College in Mechanicsburg, PA. Steve competed against masters and doctoral students from all over the country. His performance of Anthony Plog’s Concerto No. 2 – Mvt 4 was outstanding in both it’s technical precision, as well as his musical artistry. We want to congratulate Steve Felix on a job well done and for keeping the Graduate Soloist title in the Eastman family! Back to Back Champions! 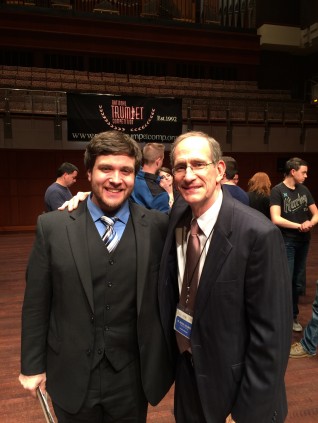 •Many members of the Eastman Trumpet Studio were selected to participate in this years upcoming National Trumpet Competition at Messiah College in Mechanicsburg, PA. Members such as: both Large and Small Eastman Trumpet Ensembles, Dean Oaks representing the undergraduate class, and Alex Mayon and Steve Felix representing the Graduate Class. We want to wish them good luck in the upcoming competition!

• James Peyden Shelton, a third year doctoral student in the trumpet studio, was recently featured in an advertisement for Stomvi Flex Mouthpieces for his use of their product during his winning performance during the 2014 National Trumpet Competition. You can check out this advertisement for yourself in the October 2014 issue of the International Trumpet Guild Journal. 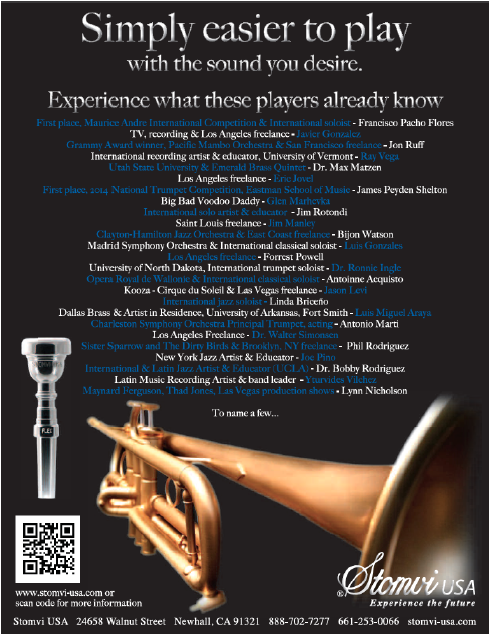 • Sam Huss, a junior in Professor Thompson’s studio, was chosen to compete in the 25th Annual Citta di Porcia International Trumpet Competition on November 10th through the 15th in Pordenone, Italy. Sam will compete against trumpet players of all ages and skill levels from all over the world. This year’s judging panel consists of trumpet performers for five different countries, including Ed Carroll (USA), Eric Aubier (France) and Gabriele Cassone (Italy). We want to wish Sam the very best of luck during his competition! 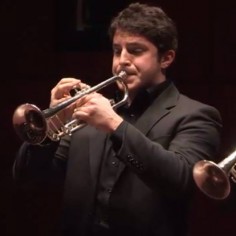 • This summer 3 current students at the Eastman School of Music Trumpet Studio were chosen to attended the Chosen Vale Trumpet Seminar. This year Professor James Thompson rejoined the faculty for one week of the two week long seminar. Each student worked with master trumpet pedagoges from all over the world in hopes of refining their skills and gaining valuable insight into the world of trumpet performance and pedagogy. 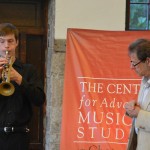 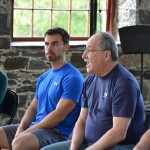 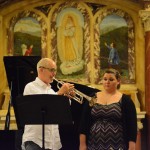 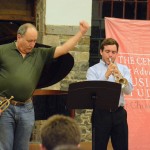 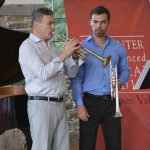 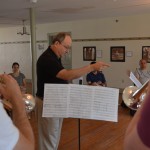 •Recent ESM Alumni, Natalie Fuller, was awarded the position of Professor of Trumpet and Low Brass at Montana State University. Natalie attended the Eastman School of Music for both her Masters and Doctorate. She was a finalist and award winner at the National Trumpet Competition on multiple occasions as well as serving as the head teaching assistant for the trumpet studio. She served on the faculty of Cornell University and the Eastman Community Music School before taking her new position in Montana. We want to wish Natalie good luck at her new position this fall!

•Junior Bailey Paugh performed with the Rapid City Municipal Band in South Dakota this past summer. She was featured as a soloist with the ensemble in a performance of Alexander Arutunian’s Concerto for Trumpet and Orchestra. Great Job, Bailey! Thanks for spreading your musical talents out in the West.

•Dovas Lietuvninkas, current junior in the trumpet studio, traveled to Lithuania this summer. There he studied with members of both the National Symphony Orchestra, National Opera, and Ballet Theatre Orchestra. He also taught private lessons trumpet and lead masterclasses at a Lithuanian brass band camp.

•Doctoral Student, James Peyden Shelton, was featured as a soloist with Southwest Virginia’s professional wind band, Winds of the Blue Ridge. He performed Bruce Broughton’s Excursions for Trumpet and Band. Thank you for representing the Eastman School of Music in such a wonderful performance.

•In 2014, Alex Mayon traveled to Africa as a part of MIA (Music Inspire Africa). He and other musicians from around the world performed concerts and taught music to students in schools throughout Zimbabwe. 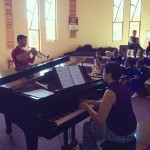 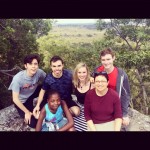 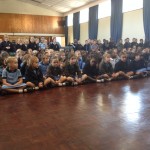 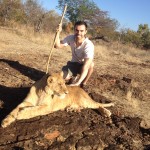 •We are very proud to announce that former alumni, Phillip Chase Hawkins, was appointed Principal Trumpet of the Knoxville Symphony Orchestra. Chase graduated from Eastman with both his Bachelors of Music and Masters of Music under the guidance of Professor James Thompson. Chase is now also a teaching assistant at the University of Kentucky pursuing his Doctor of Musical Arts degree. Congratulations, Chase!

•Congratulations to alumni, Adam Gandolfo for winning the 2nd trumpet position in the Virginia Symphony. Adam graduated from Professor Thompson’s studio in 2012 with his Masters of Music. We want to wish Adam luck as he starts his new and exciting career. Congratulations!

•Jonathan Heim (BM 2012) represented the Eastman School of Music Trumpet Studio in the 2012 Ellsworth Smith Trumpet Solo Competition. A wonderful and excited performance! We wish him all the best as he continues his musical studies at the Juilliard School in New York City this coming year. He plans to study with trumpet teacher, Mark Gould.