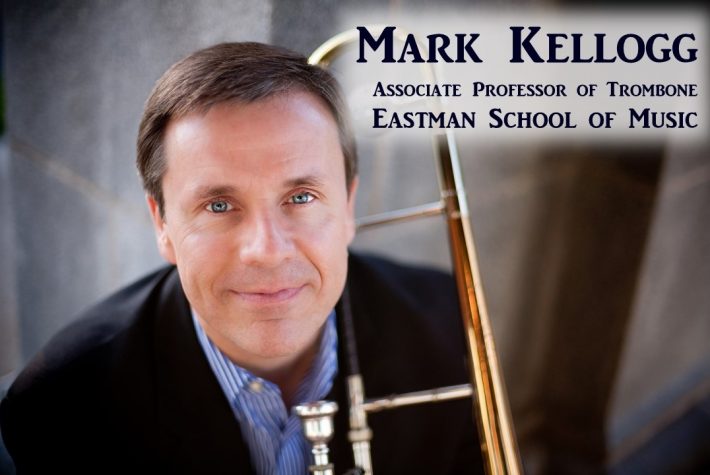 Throughout his career, Mark Kellogg has embraced a wide range of musical roles as a performer, teacher and administrator. Whether it’s meant appearing as a concerto soloist, playing in a variety of chamber ensembles, performing as an orchestral musician or as jazz player, teaching students of all ages or overseeing artistic programs or committees, he has been most fortunate to experience a rich array of musical opportunities. Currently Associate Professor of Trombone, Euphonium, and Brass Chamber Music at the Eastman School of Music, an affiliate faculty member in Eastman’s Jazz and Contemporary Media Department, and Co-Director of the Eastman Trombone Choir, he also holds the Austin Hildebrandt Principal Trombone Chair in the Rochester Philharmonic Orchestra.

Mr. Kellogg has appeared as soloist with the RPO on many occasions, performing the concerti of Tomasi, Albrechtsberger, Larsson, Schilkret and Jeff Tyzik (commissioned by the RPO in celebration of the orchestra’s 80th anniversary), works by Elliott Carter and Fred Sturm and numerous jazz and euphonium solos on the orchestra’s Pops series. Prior to his appointment in the Rochester Philharmonic, he performed as a member of the San Francisco Symphony, Syracuse Symphony and National Repertory Orchestra.  Mr. Kellogg has been a frequent guest with the Eastman Wind Ensemble, appearing as soloist in the Eastman Theatre and on tours to Japan and Carnegie Hall with Donald Hunsberger and Mark Davis Scatterday.

A Conn Trombone performing artist, Mr. Kellogg has made appearances at numerous low brass symposia including the International Trombone Festival, the American Trombone Workshop, the Falcone International Euphonium and Tuba Festival, the Northeast Regional Tuba-Euphonium Conference, the Asian Pacific Music Educators Conference the New York Brass Conference as well as trombone festivals in Panama and Costa Rica. He has performed as soloist with ensembles such as the Hartford Symphony, the US Army Orchestra, the University of Rochester Symphony, the Youngstown Symphony, the Hamilton New Music Ensemble and the Penfield Symphony. This past July, he performed and taught for two weeks at the National Taiwan Symphony Orchestra’s International Youth Orchestra Institute.

In 2006, Mr. Kellogg initiated Eastman’s annual Summer Trombone Institute, a week-long workshop for high school, college, and adult amateur trombonists. In June 2014, he served as co-host of the International Trombone Festival, held at the Eastman School.

He lives in Pittsford, NY with his wife, RPO flutist Joanna Bassett, and their son Rob, currently a theatre major at Boston University.