Back to This Week At Eastman

1922: "For the enrichment of community life"

Rochester citizens of all ages approaching and lining up outside the new Eastman Theatre on Opening Day.  The large EASTMAN sign on the Main Street side of the building was removed in 1971 owing to safety concerns. Photographer unknown.  ESPA 11×14 2-53; ESPA 11×14 2-53.

The Eastman Theatre stage is set for the orchestra members and the screen is in place ready for a motion picture to be shown.  Photographer unknown.  ESPA Album 7-23.

On Monday September 4th, 1922, which happened also to be Labor Day, the Eastman Theater was opened to the public for the first time. Not only was the day one of the most significant in Eastman School history, but it also represented a milestone date in the civic history of Rochester, New York. The Eastman Theater was George Eastman’s gift to the University of Rochester “for the enrichment of community life” (as read the words that grace the theater’s façade). From the outset, the theater’s purposes were twofold: to screen the best motion pictures that were available, and to serve as a venue for live musical performance. Significantly, the accompaniment of the silent motion pictures was to be provided by the newly founded Eastman Theater Orchestra; historically, it was out of the theater orchestra that the Rochester Philharmonic Orchestra was born.

Rochester’s daily newspapers issued special sections to commemorate the theater’s opening. These were an 8-page section issued by the Democrat and Chronicle, September 10th, 1922, with George Eastman’s photo printed over the entire span of the first page; and, a 16-page section issued by The Post Express, August 26th, 1922, with a drawing of the Eastman Theater’s exterior covering the entire span of the first page. This special section was especially elaborate in its presentation of the Eastman Theater’s splendid architectural details and its lavish amenities.

A private opening ceremony—with attendance exclusively by invitation—had taken place on Saturday, September 2nd. A souvenir program had been provided to the invited patrons that amounted to more than two dozen pages in length, filled with descriptive text, photographs, and a reduced-size representation of the architectural drawing of the floor plan. The following words appeared on the souvenir program and also on the printed program that would be distributed to the public:

By the terms of the gift of George Eastman, this theater is the property of The University of Rochester, to be operated and maintained for the promotion of musical interests generally in the City of Rochester through a separate Board of Trustees. Any surplus from the operation of the theater will be used in developing the musical interests of the city.

In that by-gone era, moving picture cinemas were generally in the business of providing live entertainment preceding the screening of the featured motion pictures. That is, on any given day or evening, the cinema-goer could enjoy, for the price of his or her ticket, some selections of live music (whether vocal or instrumental), a newsreel or news feature of some kind, and possibly some other features besides—all this in advance of the start of the film. The Eastman Theater’s program of entertainment for its first week of operation, beginning with the private opening on September 2nd, and continuing throughout the week beginning September 4th, was comprised of the following features:

The featured film, The Prisoner of Zenda, was a newly produced motion picture directed by Rex Ingram and starring Lewis Stone, Alice Terry, Robert Edeson, and Stuart Holmes.  (Does any one of these names ring a bell?  If not, remember that they were all stars of the silent screen; many stars of the silent film era actually saw their careers end overnight when the “talkies” came in in the late 1920s.) The film was one of now several adaptations of the popular novel The Prisoner of Zenda (1894) by Anthony Hope and the subsequent play (1896) by Anthony Hope and Edward Rose.

Perhaps the most fitting thing to take away from the Eastman Theater’s opening were the sentiments captured on the last page of the special section of The Post Express.  On that page, an advertisement for department store B. Forman Co. carried the heading “The influence of the Eastman Theater will be felt throughout the world” and continued with these lines (upper case here presented as in the source publication):

It Stands Unique Among the Edifices of All Ages and All Civilizations, for its Lofty Ideals and the Perfection of its Architecture—as a Monument to the Achievements of the Past, as a Tribute to the Genius of a Man of the Present, and as an Earnest of the Cultural Progress Not Only of This Community Which is Fortunate Alike in Being the Residence of its Donor and the Center of its Influence, but also of the Whole World.

At the Eastman Theater’s opening, the sentiments were deeply felt: gratitude to Mr. Eastman; pride in the Theater and in its amenities; huge satisfaction in what the Theater boded for the community; and optimism about the Theater’s influence moving forward into the future.

At Convocation on September 4th, 1975, the featured faculty performers were flutist James Galway (served 1975-76) and pianist Robert Spillman (served 1973-86). James Galway was newly appointed to the Eastman School faculty; he would later return in December, 1985 as soloist with the Eastman Philharmonia in a performance of John Corigliano’s Pied Piper Fantasy, which had been composed for him. On that occasion Mr. Galway and the Eastman Philharmonia recorded the Corigliano work for the RCA label. Mr. Galway would return yet again in 2014, at which time he received an honorary Doctor of Music degree from the University of Rochester.

1980: The Philharmonia returns from Heidelberg

On September 1st, 1980, the members of the Eastman Philharmonia touched down at Rochester’s airport, returning from their summer engagement at that year’s Heidelberg Music Festival.  They were welcomed back by the Eastman School’s top administrators; Director Robert Freeman and Associate Director Jon Engberg were at the airport gate to greet the orchestra members as they de-planed. (Many readers will recall those pre-9/11 days, when friends and family members could accompany travellers to the gate.)

Founded in 1974, the Heidelberg Music Festival featured open-air performances in proximity to the famed medieval castle in Heidelberg, Germany. German orchestras traditionally take their vacations in the late summer when the Festival programming took place, and so there turned out to be an opening. The Festival’s director, Dr. Peter Stoltzenberg, looked overseas for a resident orchestra, and in the winter of 1980, Stoltzenberg made a visit to the U.S. and visited five institutions (Eastman, Julliard, Michigan, Curtis, and the University of Illinois). After auditioning those institutions’ student orchestras, he offered the Eastman Philharmonia a contractual residence at the 1980 Festival, a contract which the Eastman School promptly accepted. Under the contract, 43 members of the Philharmonia would perform as the collaborative orchestral forces in productions of Die Lustige Weiber von Windsor, Gazzaniga’s opera Don Giovanni (pre-dating Mozart’s opera of the same title), and The Student Prince, and would also give one concert performance. The Philharmonia’s success at that initial Heidelberg engagement led to a full decade’s residency at Heidelberg, annually through the 1990 Festival.

1997: Return of the Gateways Music Festival

On September 4th-6th, 1997, the Gateways Music Festival was held in Rochester for the second time—and, significantly, for the first time with the Eastman School of Music as an active partner. Founded by concert pianist Armenta Adams Hummings in 1993, the Festival had as its central aim to celebrate the universal appeal of classical music and its power to cross racial lines and to bring divers communities together.  These photos show a youth ensemble rehearsing in Room 120 (today the Ray Wright Room) during the Youthfest which was part of the 1997 Festival program. The Festival concluded on September 6th with a pair of chamber music recitals in Kilbourn Hall.

Further content from the Gateways Music Festival will appear in future issues of “This Week at Eastman”. 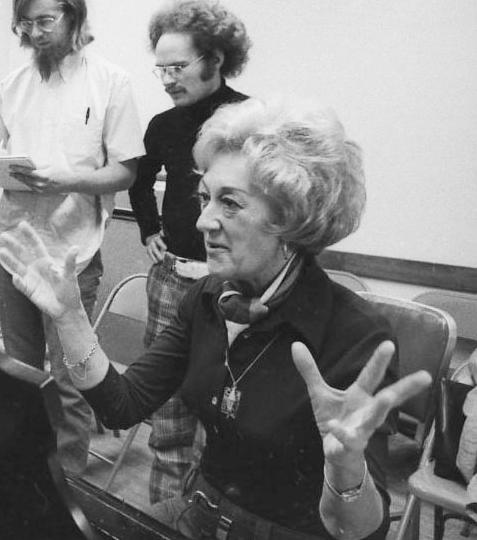 On October 29th, 1972, renowned jazz pianist Marian McPartland (1918-2013) was photographed while working with Eastman students in the classroom. 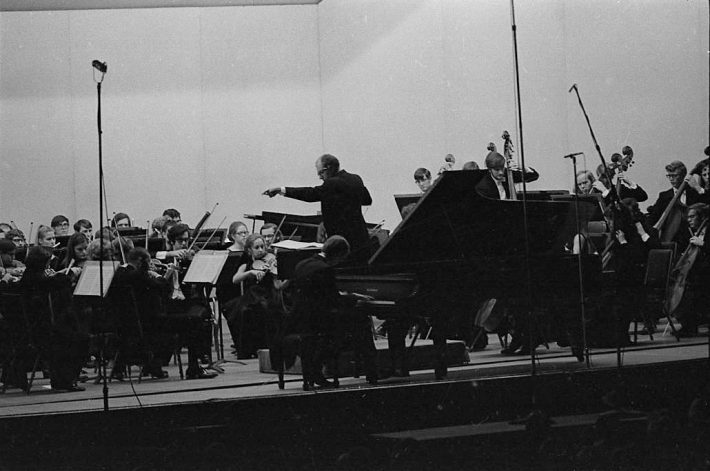 October 23rd, 1970, ESM Director Walter Hendl conducted the Eastman Philharmonia in what had by then become an annual event at Eastman: a United Nations Concert. 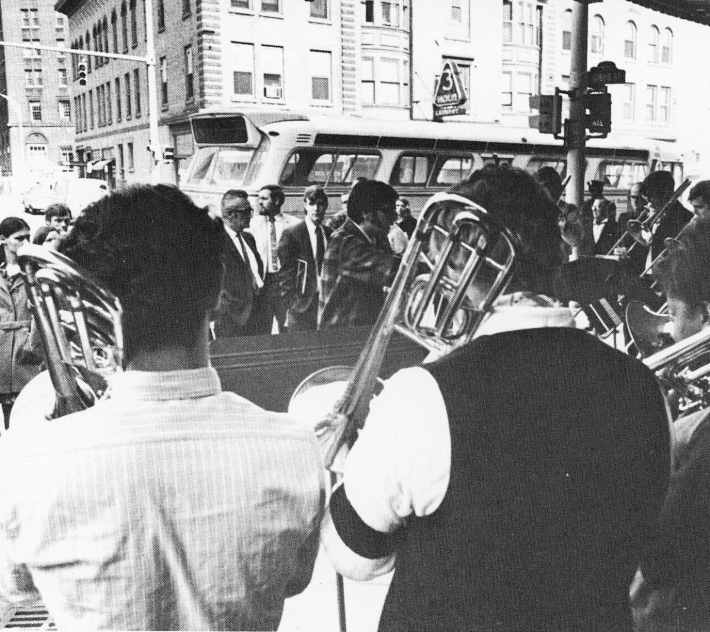 On October 15th, 1969, a large-scale demonstration known officially as the Moratorium to End the War in Vietnam was staged in many cities and towns. 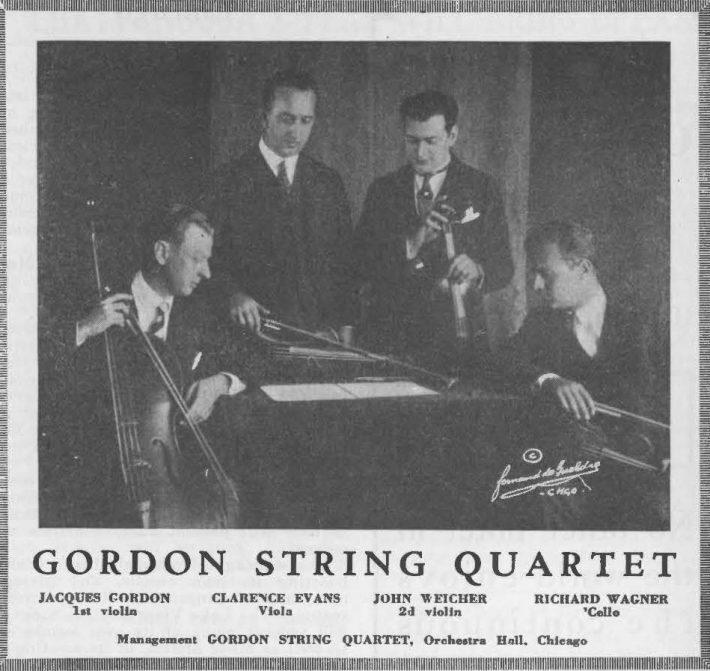 October 10th, 1927, the the Gordon String Quartet made its first appearance at the Eastman School of Music in a Kilbourn Hall recital.