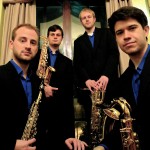 The East End Quartet was formed in 2013 among graduate students at the Eastman School of Music in Rochester, NY. The members include Jonathan Wintringham(soprano), Myles Boothroyd(alto), Matthew Amedio(tenor) and Timothy Harris(baritone). Collectively, they have received winning prizes in the Fischoff National Chamber Music Competition, the Plowman Chamber Music Competition, the North American Saxophone Alliance (NASA) Collegiate Solo and Quartet Competitions, the Music Teachers National Association (MTNA) National Solo and Chamber Competitions, the Vandoren Emerging Artist Competition, and many more. Its members have performed worldwide, including Austria, the Czech Republic, England, France, Italy, Japan, and Mexico. Today, East End is rapidly gaining recognition for its unique approach to concertizing, including works for saxophone quartet and piano, lecture-recitals on international music, and their own transcriptions and arrangements of contemporary and traditional repertoire.

Founded in 2015, Fuego Quartet is an award-winning chamber group devoted to the performance of both standard and contemporary works written for the saxophone. Most recently, they were awarded the Gold Medal of the 2017 Fischoff Chamber Music Competition, 1st place in Brass, Winds and Percussion at the Plowman Chamber Music Competition and 2nd Place in the 2017 National MTNA Chamber Music Competition. Additional awards include first prize in the 198th Army Band College Chamber Competition, the 2016 New York State MTNA Chamber Competition, and the 2016 Eastern Regional MTNA Chamber Competition. They were semi-finalists in the 2016 North American Saxophone Alliance Quartet Competition and have also been selected as winners in the 2015 Honors Chamber Music Competition at the Eastman School of Music. Fuego has been featured in a variety of settings from standard concert hall venues to community outreach concerts. They have been featured artists at the Strong National Museum of Play, The George Eastman Museum, Dorris Carlson Reading Garden, Phillis Wheatley Library, Susan B. Anthony Museum, Washington Square Concert Series, OSSIA Presents and [Col][lab] and have presented recitals and masterclasses at Nazareth College and Frostburg State University. Members hold degrees from the Eastman School of Music, Indiana University, University of Illinois and University of Georgia.[lab]. 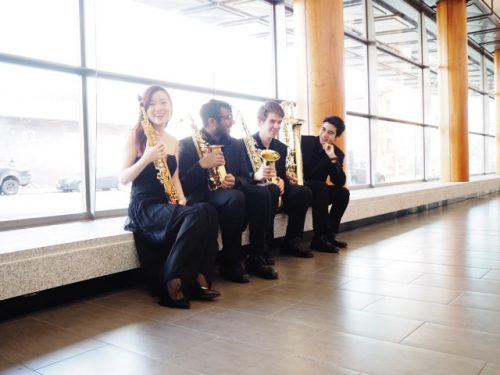 The Iizuna Quartet was founded in 2015, and is comprised of both undergraduate and graduate students. Iizuna has performed a variety of both standard and contemporary repertoire for the saxophone quartet, as well as transcribed repertoire. Most recently, they were featured in a composer’s forum led by Carolyn O’Brien, where they performed O’Brien’s “Thing Contained.” When not in rehearsal, the members of Iizuna spend their together eating asian food and watching horror movies. 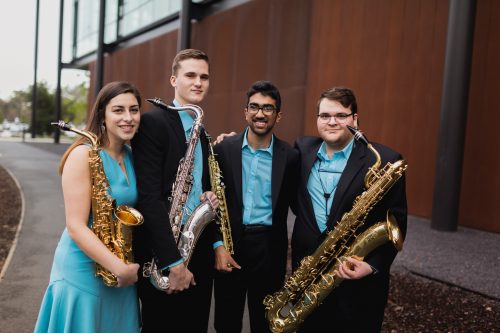 Since 2016, the Scio Quartet has been a prominent Rochester-based chamber ensemble with a focus on performing a wide range of music for an equally wide range of audiences. Scio has participated and won top prizes in a variety of competitions, including first prize in the 2019 MTNA Chamber Music Competition and the 2018 198th Army Band Solo and Ensemble Competition. The quartet has also performed as a featured ensemble at the John F. Kennedy Center for the Performing Arts in Washington D.C.. In addition to their busy competition and recital schedule, the quartet also dedicates itself to fostering a love of music in new audiences. In Rochester alone, Scio has performed for the RIT Osher Institute, Memorial Art Gallery, George Eastman House, Children’s School of Rochester, Strong Medical Center, and the Irondequoit Public Library. Scio has also performed around the United States in Virginia, Florida, and most recently completed a week-long tour in Northern California. The quartet is comprised of Uday Singh (soprano), Siobhan Plouffe (alto), Clancy Ellis (tenor), and Michael Matthews (baritone). 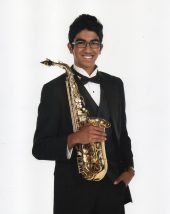