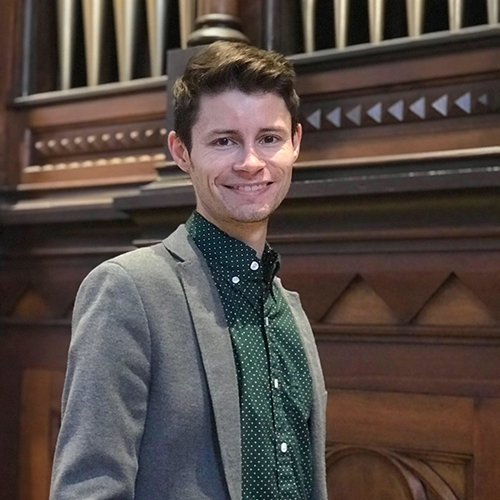 Lukas Perry is a second-year Ph.D. student in Music Theory. He earned an M.A. in Music Theory and M.M. in Choral Conducting from the University of Minnesota and a B.A./B.S. in Music and Mathematics from the University of Puget Sound. He has worked as a full-time church organist and choir director and served as the artistic director of the Minnesota Center Chorale. Prior to coming to Eastman, Lukas taught music theory as an adjunct at Minnesota.

His interests include video game music theory, the music of Maurice Duruflé, and music theory pedagogy. He presented on harmonic sequences as indicators of polystylism in Anton Bruckner’s choral music at the 2017 South-Central SMT Conference as well as the compositional process of the fourteenth-century Cypriot Mass at the AMS New England 2021 Winter Conference. In addition to working as a teaching assistant, he teaches theory at the Eastman Community Music School and is the organist and choir director at Brockport First Baptist Church.

In his spare time, Lukas enjoys being outdoors—skiing, hiking, biking, and camping.