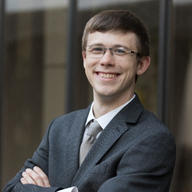 Braden Maxwell (bmaxwel2@u.rochester.edu) is a sixth-year Ph.D. candidate in music theory. He holds M.A. and  B.M. degrees in music theory from the Eastman School of Music and the B.A. in Brain and Cognitive Sciences from the University of Rochester. Braden studied piano at Eastman with Tony Caramia, and previously with Lisa Simon.  As a teacher of music theory and aural skills, he is particularly passionate about helping students overcome individual cognitive obstacles to dictation and transcription.  Braden’s current research pursues two lines of inquiry. His dissertation focuses on a novel music-theoretical approach to introspective phenomena in the music of Maurice Ravel. His interdisciplinary work through the Carney Lab focuses on the intersection of music, neuroscience, computational modeling, and psychoacoustics, investigating the role of the midbrain (inferior colliculus) in processing acoustic features that are critical for the perception of musical stimuli. Braden’s psychoacoustic work has been published in the Journal of the Acoustical Society of America, and he has presented at several conferences and meetings including the Music Theory Society of New York State (MTSNYS), the Society for Music Perception and Cognition (SMPC) and the Association for Research in Otolaryngology (ARO). Recently, he and his co-authors won the first-place student prize at the Future Directions of Music Cognition conference for their paper, “A new auditory theory and its implications for the study of timbre”.