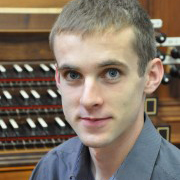 Ivan Bosnar, a native of Croatia, is pursuing a Doctorate of Musical Arts in Organ Performance at the Eastman School of Music, where he studies organ with Nathan Laube and improvisation with Edoardo Bellotti and William Porter. He took his first organ lessons at Vatroslav Lisinski School of Music in Zagreb where he studied with Jasna Šumak-Picek. Following high school, he studied organ at Zagreb Music Academy with Mario Penzar and at the University of Music and Performing Arts in Graz with Ulrich Walther. Ivan won First Prize in the Croatian Organ Student Competition in 2009, and Second Prize and Audience Prize in the University of Michigan Organ Improvisation Competition in 2016. He has appeared in several organ festivals, both in Croatia and abroad (Požega Cathedral, Zagreb Cathedral, Loretto, Graz, Pecs, Berlin). He has collaborated with the Croatian Military Symphony Orchestra and the Croatian Radiotelevision Symphony Orchestra. As a church musician, he served as organist at St. Peter’s Church in Zagreb, at St. Mary’s Church in Zaprešić, Croatia, and at St. Boniface Church in Rochester, New York. He currently serves as Music Director and Organist at St. John the Evangelist Church in Spencerport, New York.

Back
Go to Top