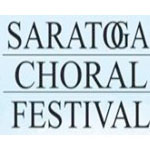 The Saratoga Choral Festival began in the summer of 2001. Previous seasons have featured the requiems by Fauré, Duruflé, and Mozart (repeated in October 2001 as a benefit for the Red Cross and victims of 9/11), Bach’s Magnificat (featuring members of the Philadelphia Orchestra), Haydn’s Lord Nelson Mass, Vaughan Williams’ Dona Nobis Pacem, Handel’s Dixit Dominus, Rutter Gloria, Mozart’s Coronation Mass and a premiere of a new edition of Gretchaninov’s Liturgia Domestica in 2009. In August of 2004, the chorus finally realized its dream of performing with the Philadelphia orchestra in a critically acclaimed performance of the Mahler 3rd Symphony with the Harlem Boys Choir under the direction of Charles Dutoit at SPAC. By performing at the Little Theater located in the heart of SPA State Park, the Festival joins the list of illustrious performances presented there during the summer such as the Lake George Opera and the Saratoga Chamber Music Festival.