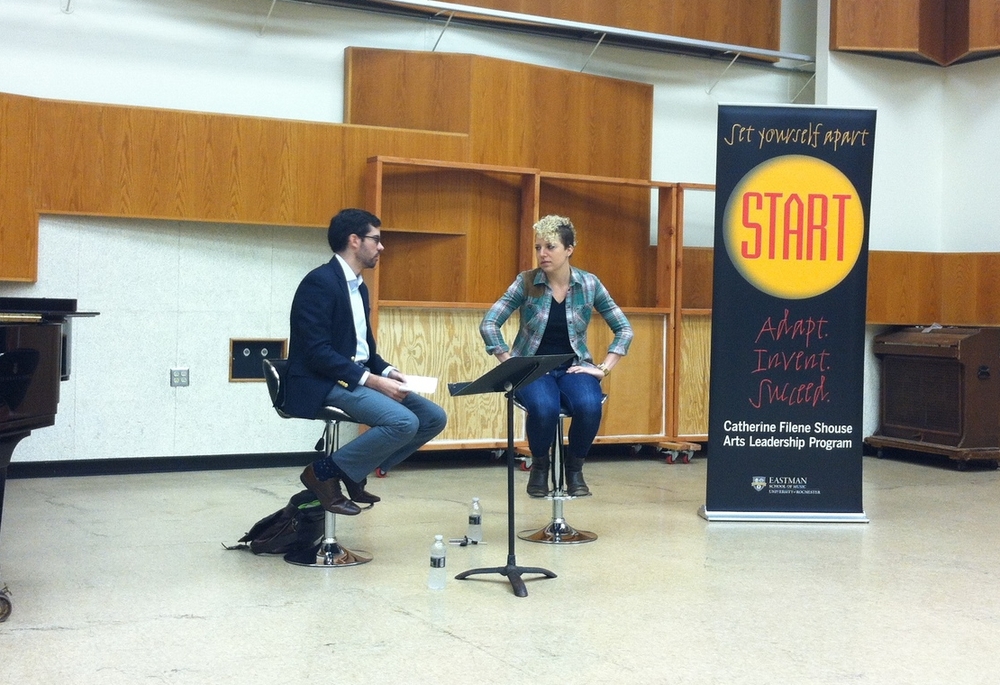 All posts from Stephen Danyew
Posted in
Spread the love

This post first appeared on Musicovation, and is reprinted here with permission.

This fall, I am teaching a class in the Eastman School’s Arts Leadership Program titled “Excellence, Innovation, and Uniqueness: Developing Your Creative Career in Music.”  I came up with the title when thinking about successful 21st century ensembles and musicians, and I kept coming back to three elements that they shared: excellence, innovation, and uniqueness.  So, I decided to create a course based around these three concepts.  In the class, we spend a lot of time working in pairs and small groups, helping explore each student’s unique qualities, talents, skills, and goals.  We use creativity exercises to think beyond what is typical, tried, and predictable.  We discuss dreams, practicality, risk, empathy, professionalism, and other topics. Last week, Claire Courchene, a friend of mine who lives in Los Angeles, came and spoke to my class and about 30 other students from Eastman who wanted to hear about her career and her perspectives on the music world.  We also organized a similar talk at nearby Nazareth College.

You can read more about Claire on her website (www.clairecourchene.com), but let me provide a succinct bio: Claire is a world class performer with degrees in jazz trombone AND classical cello, plays and records with some of the biggest artists in the world such as Josh Groban, Harry Connick Jr., Kanye West, Madonna, and performs frequently on American Idol, Glee, and The Voice.  Enough said – we can learn a lot from her.

Here are three things I took away from Claire’s many wonderful reflections on her own career and the music field as a whole.

1. Versatility and Likability – When I asked Claire for the one or two elements of her training that she feels are most important to the success of her career, she didn’t hesitate: versatility and likability.  She said that at a certain level, everyone can perform well.  That is a given.  One thing that has helped her distinguish herself is her versatility – being able to play trombone, cello, piano, sing background vocals, and do it all in many different styles.  She told students to be aware of, at some level, many different styles of music, even if you don’t know how they will impact your career in the future.  Listen to some jazz, classical, salsa, pop, electronic, and other types of music.  Try to improvise a bit in these styles – you never know when those skills may come in handy.

The other big quality that Claire emphasized was likability – how well you get along with others in professional settings. If people enjoy your company at a gig, they will want to hire you in the future. Performing at a high level is a given – you also need to be social and interested in getting to know the other musicians involved, and you can’t be on your phone checking Facebook the whole time.  Be likeable and build your network – musicians want to work with great musicians, but also musicians who they enjoy being around. 2. Be Yourself – A student at Nazareth asked Claire if he should keep his interests in funk music and classical music separate, even though he really wanted to combine them in his compositions.  Her advice: do it!  Go ahead and incorporate funk lines into your classical composition if that is what you want to do.  Try to be aware of the market and understand if there is an audience for your art, but don’t suppress your creativity and don’t try to be like anyone else.  Be yourself – you are unique and people will value that. There is no one path to achieving goals, so don’t try to follow the path of other people. Make your own path.

3.  Prepare Now – Think about ways you can be preparing for your career now, no matter what level you are at (college sophomore, second year master’s student, etc.)  Network – get to know people around you. They will be the people you interact with and work with in the professional world.  The music world is very small. Build a body of work – recordings of your performances, compositions, teaching ideas, etc.  Strive to make good quality video recordings of your work that can be posted online (YouTube, your own website, etc).  Video is a great way to promote yourself, your skills, and your projects.

Take advantage of your school’s alumni network when you are preparing to start your career. Your school’s alumni department likely encourages students and recent alumni to reach out to other alumni, and alumni are usually eager to help those just starting out since someone likely helped them get started.  Get in touch with alumni who are living and working in the location where you are headed. See if you can meet for coffee so you can pick their brain, get their advice, and learn about the music scene in that area.  Don’t be shy (don’t be obnoxious either!) – you need to build a network and get on people’s radars.  This is a people business and people will help you, but they have to know you are there.