A Tale of Two Audiences Let’s talk about programming, shall we? Any music director of an American orchestra, when programming a season, is striving to create balance. What does the orchestra need to play in order to grow artistically? What does the audience want to hear? What do they need to hear in order to[…]

Yesterday the South Dakota Symphony played its Lakota Music Project at Crazy Horse Memorial near Custer, SD in the Black Hills. http://crazyhorsememorial.org/info/‘lakota-music-project’-highlights-native-americans’-day-at-crazy-horse/ It was Native American Day in South Dakota (Governor George Mickelson renamed Columbus Day in the 1990, part of his Common Ground initiative). The Lakota Music Project has been over five years in[…]

END_OF_DOCUMENT_TOKEN_TO_BE_REPLACED 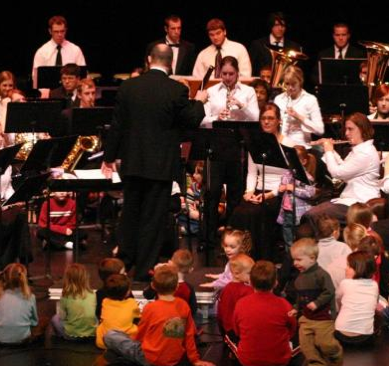 I attended the May 2, 2009 Young People’s Concert of the New York Philharmonic at Avery Fisher Hall in order to visit with my friend and colleague David Gier and his wife Angela (who now live in South Dakota). My husband Algis accompanied me, though he really wasn’t up for a “kiddie” concert, having heard me lament the lack of imagination in so many of those I’ve played over the years. We were, however, both totally blown away and delighted by what we heard and saw.

Four actors, representing New York, Paris, Vienna, and St. Petersburg from four different historical periods, appeared throughout the hall and were obviously in the midst of an ongoing contentious debate about which city’s music was most important. David, as conductor, was completely a part of the actors’ script, the Philharmonic played several substantial Russian masterpieces, including the Finale of Pictures at an Exhibition, and the concert ended with all four actors dancing to Mozart’s 40th in four very different dance styles – an electrifying sight!

At the wrap party after the concert, after congratulating them profusely, I asked David and Tom Dulack, the director and scriptwriter, to share with me their experiences of and thoughts about putting together such a complex concert series for children and their families.