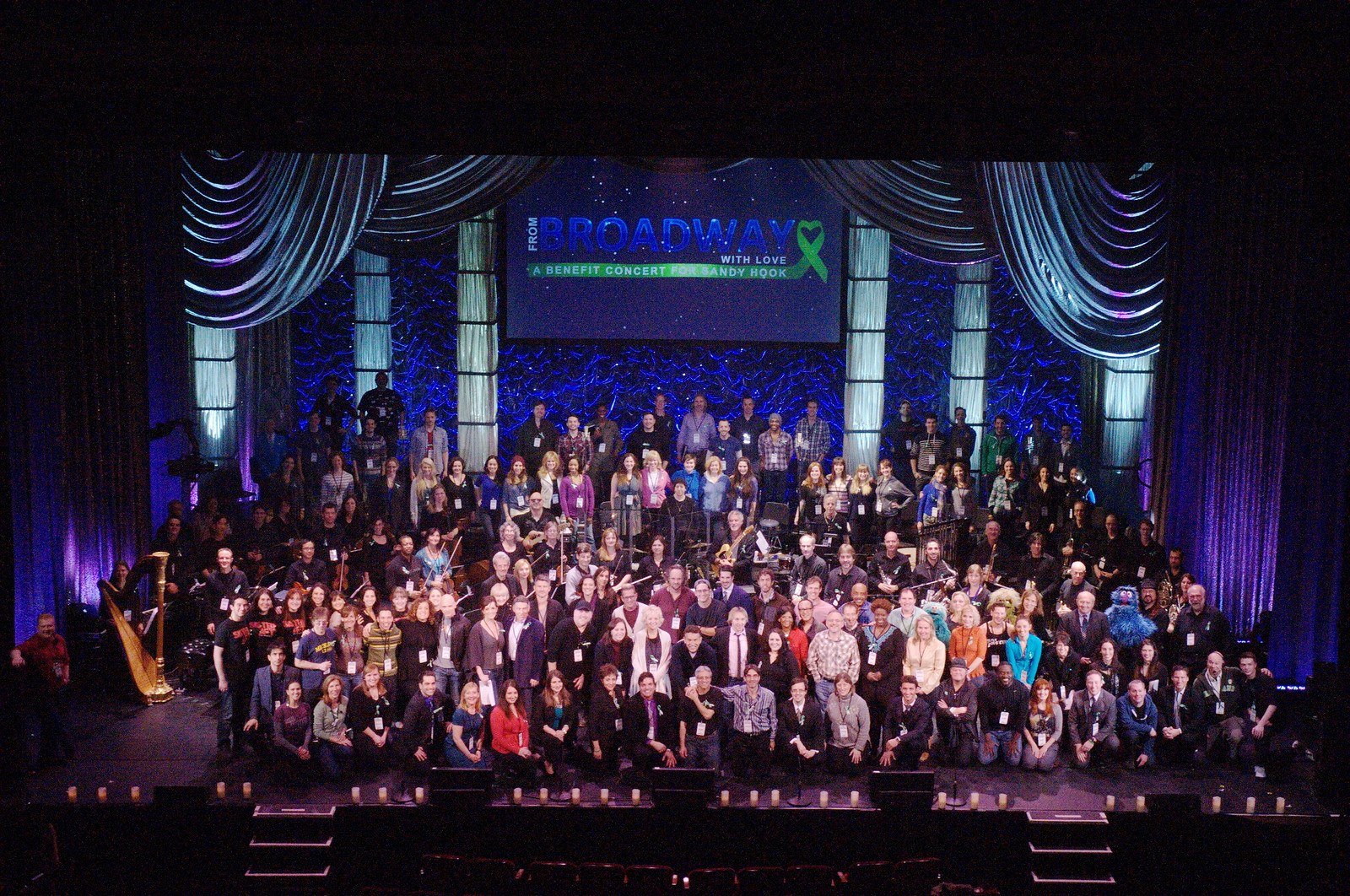 Brett is an award-winning musical theatre composer, lyricist, and librettist. He has written four musicals to date - the latest of which (Foreverman) recently premiered at the New York Musical Theatre Festival (NYMF) where it received an award for Outstanding Orchestrations and the New World Stages Development award. Brett has had the honor of working with some of broadway's finest talent, including Brian Stokes Mitchell, Christine Ebersole, Josh Young, and Jeremy Jordan - as well as composers Frank Wildhorn, Stephen Schwartz, and Marc Shaiman. Brett is also a member of the Tony-Award-Winning BMI Lehman Engel Musical Theatre Workshop in NYC.

All posts from Brett Boles
0

Saturday night, December 15th, I lay in bed staring at the ceiling, 1:30AM, images and sound bites from various news networks replaying over and over in my head.  Like many other people, I had trouble simply processing the nature of the tragedy that struck my hometown the morning before.  And – like many others – the question that kept repeating: “What can I do?”

Having lived through September 11th, I remember witnessing the outpouring of support from all over the world as the charitable, kind, and loving side of humanity manifested itself in the wake of horrific events.  I knew the same would be true of this tragedy.  But still, even knowing that people from all over the world would be sending all manner of condolences, I still asked myself “What can I do?”

Newtown has been my home since 1995.  I attended middle school and graduated from high school here, learned to drive here, ordered sandwiches at the general store, made frustrating left hand turns at the flagpole, visited frequently while away at school, and moved back after college.  I now live here with my wife, Caitlin.  I’m a musical theatre guy through and through – I write musicals, I perform in musicals, my entire life and career revolves around musical theatre.  It has since I was in eighth grade.  And suddenly I had an idea.

Theatre has always brought this community together – our auditorium was always packed every spring for the school musical.  People in this town are moved by the arts, and I know from personal experience that music and art can be particularly healing.  So why not organize a Broadway Benefit Concert and bring the very best of Broadway here to Newtown?  That’s what I would do – I would use my connections and my ties to the Broadway community to help the people of my own community begin to heal.

1:30AM.  I reach over for my phone and ask Cait if she thinks I should send a Facebook message to Van Dean, a Tony-Award-Winning Broadway Producer from Trumbull, CT.  I thought he might have a vested interested in the community, having grown up only a couple of towns away.  Cait groggily murmurs “Yes.  Just do it.”

Here is the message my exhausted fingers typed out (this has never been released anywhere):

Hi Van, Brett Boles here (writer of Foreverman at this year’s NYMF festival). I’m writing because I’ve been reading your posts and I’m actually from Newtown, went to middle school and high school here and currently live in Sandy Hook just minutes away from the elementary school. I was thinking about trying to organize some sort of Broadway benefit concert here and don’t really know where to start…but I thought you might be a good person to contact as a starting point since you are from the area. Let me know if you have any thoughts about this! Would be great to raise some money and spread some love from the Broadway community. Thanks, Brett The very next morning, Van responded that he would like to personally help organize this.  He posted a message on Facebook and within two hours received over one hundred responses from actors, musicians, directors, technical and producing people – you name it.  This is a man who has produced a slew of Broadway shows (including Porgy and Bess, for which he and his team took home Tony Awards).  He is a producer on Cinderella and Matilda, and yet he was willing to delegate all of that work and devote himself exclusively to what became titled “From Broadway With Love.”

Within a week, we had a venue: the Palace Theater in Waterbury.  The Palace donated their space to us.  Two weeks, and we had a logo and a website ready to go.  And the talent began pouring in.  Brian Stokes Mitchell, Christine Ebersole, Micky Dolenz, Linda Eder, Frank Wildhorn (Jekyll&Hyde), Marc Shaiman (Hairspray, SMASH), Stephen Schwartz (Wicked), Philip Boykin, Mary Testa, Capathia Jenkins, Nikki Blonsky, Sesame Street, and more – all hopped on board to show their love and support.

Michael Unger took the directing position, Jeff Saver took up the baton as music director, Kim Scharnberg (one of my all-time favorite orchestrators) stepped in to do the lion’s share of the music preparation and last-minute orchestrations.  We lined up a 42-piece professional Broadway orchestra, and had a 50-person chorus of professional singers/performers.

The ensemble rehearsed together for four days prior to the January 28th performance, and the soloists worked with our directors and musical director on their own.  In addition, I was responsible for gathering the Newtown portion of the talent for the evening’s performance.  The Newtown High School chamber choir performed “Sunday” from Sondheim and Lapine’s Sunday in the Park with George alongside Michael Cerveris, and they also performed an a cappella arrangement of “Somewhere” from West Side Story.  We had 72 dancers of all ages from various dance studios in Newtown perform “You Can’t Stop the Beat” from Hairspray.  I wrote and performed a piece called “Still” with the orchestra and the ensemble.  My friends Stephen Ferri, Andrew Fox, and Adam Michael Kaufman donated their talents and time to beautifully orchestrate the piece.

All of these various puzzle pieces were fitted together on the day of the show.  Our staff and talent worked all day to tech the performance – food was donated from area restaurants and stars and students collaborated together on this wonderful evening of theater.  When all was said and done, over $1,000,000 in goods and services was donated for that one evening.  Van and I both feel that this will forever be a highlight (if not the highlight) of both of our lives and careers.

The love in that 2600-seat theatre was like a living, breathing entity.  There were a dozen standing ovations.  Stephen Schwartz played and sang “Beautiful City” from Godspell, Marc Shaiman sat at the piano and played for “Good Morning Baltimore” and “You Can’t Stop the Beat.”  Frank Wildhorn accompanied Capathia Jenkins on “Finding Wonderland” and played for Linda Eder as she sang Frank’s song “If I Had My Way” (lyrics by Jack Murphy).  It was a magical evening – kids were dancing in the aisles, including the younger sister of one of the victims.

After the show, I was approached by the parents of one of the victims.  They were both in tears – her father told me that while it was difficult for them to watch at some points, he was so grateful for what the Broadway community had done for them.  It allowed them to smile and laugh, remembering their daughter dancing around their house to “Good Morning Baltimore.”  I laughed with them and listened to them, and finally her mother looked at me, her eyes filled with tears, and simply asked, “Can I hug you?”  For the rest of my life, I will remember the look on her face and the feel of her arms squeezing me, as if clinging to a joyful memory.  Her father did the same – I thanked them for being there (really, they are superheroes for coming) – and as they walked away, I burst into tears and had to struggle to control myself so I could greet the others.

I can guarantee that no one who was in the room that night will ever be the same.  We bonded over something special that night.  One of the Sandy Hook parents wrote to us, saying, “We will never forget December 14th, but we will always remember January 28th.”  I couldn’t have said it any better.

NOTE: For those who are interested, there will be a DVD/BluRay and a CD in the coming months.  The entire evening was professionally recorded.  The recording will be available at http://frombroadwaywithlove.org/. Brett is an award-winning musical theatre composer, lyricist, and librettist. He has written four musicals to date - the latest of which (Foreverman) recently premiered at the New York Musical Theatre Festival (NYMF) where it received an award for Outstanding Orchestrations and the New World Stages Development award. Brett has had the honor of working with some of broadway's finest talent, including Brian Stokes Mitchell, Christine Ebersole, Josh Young, and Jeremy Jordan - as well as composers Frank Wildhorn, Stephen Schwartz, and Marc Shaiman. Brett is also a member of the Tony-Award-Winning BMI Lehman Engel Musical Theatre Workshop in NYC.