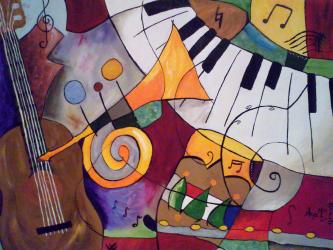 Nearly ten months ago now, recording artist, producer, and label owner Blake Morgan, posted “My New Year’s resolution is to stand up and speak out more,”  in the Huffington Post, (12/18/13). Several points he made in the article really resonated with me, especially this one, “And yet I’ve never heard of anyone who’s been successful in any profession who went for it half way.” This is a truism for me. Successful persons don’t back into their careers. They make it happen. There are several other gems in here that remind us that we shouldn’t apologize for choosing a career in the Arts. I found Mr. Morgon’s comments to be very hopeful and uplifting. I hope you will too. Read it below or go here to read on the Huffington Post.

Art and Music Are Professions Worth Fighting For

Earlier this year, I was invited back to my high school to participate in their annual career day — a day where during school hours, students learn about different professions and vocations. I was asked to join a panel about the arts, and to share some insight on what I’ve experienced as an artist and musician.

It was great seeing all the bright young faces, reconnecting with teachers I’d had, searching for my old locker. There were classmates of mine I hadn’t seen for a long time as well, each representing their own careers in medicine or law, human resources or computer programming, marketing, advertising.

Each of us went into separate classrooms, and I was met by my fellow panelists — an animator, an actor and a singer — along with the teacher who would moderate the panel, and perhaps a dozen or so students. I’d been thinking about what I could share, and about what I would have found helpful to hear when I was just such a student and so hopeful, excited and scared.

I watched the faces of the high-schoolers as they listened to the other panelists, and I found myself marveling at the courage these kids were showing just to sit in this room. To choose this room, and not the others. They’d answered a calling from deep inside themselves — however loud or soft — and done so at least enough to show up here on this day, in this room and give these possibilities a chance.

When my turn came, I said something different than what I’d planned.

I told the students that I’d bet each of them had experienced something specific right up to the moment they’d arrived in that room. And most likely, they’d continue to experience it the moment after they left. I said I’d bet they were already hearing the murmurs from countless voices about how pursuing art or music isn’t practical. It isn’t realistic. That maybe it isn’t even a worthy pursuit. Or possible.

I said, “Unfortunately, in one way or another the world is going to tell you every day that you shouldn’t try to be an artist. But for three minutes here today, I want to tell you that you should. I hope you do it. With everything you have.”

The students’ faces lit up with curiosity. I added, “I hope you don’t listen to those other voices. I hope instead you listen to your own. That voice from inside you that guided you here today. I hope you go for it, with abandon and furious joy, and that you do so without a Plan B.”

Immediately, the teacher stood up and said, “No, no no…that’s wrong. You should always have a Plan B. Don’t listen to him, that’s not right.” She walked towards me to cut me off from speaking, and I said, “You see? Even here, in the arts and music room on career day, you’re being discouraged from answering your calling. From fully and freely going for this as a career choice.” I looked at the teacher and asked her, “Do you think the kids in the ‘doctor room’ are being told to have a Plan B? Or the kids in the ‘lawyer room?’ Or the ‘marketing room?’ No, they aren’t. And by doing so here, you’re telling these kids that this is a profession less deserving of pursuit. Less deserving of hope. Or necessity. Or respect.”

Every profession has daunting risks. And yet I’ve never heard of anyone who’s been successful in any profession who went for it half way. We artists and musicians have the right to expect from our profession what others expect from their professions. That through hard work and determination, perspiration and inspiration, we’ll have the same fair shot to realize our dreams, answer our callings, support our families. With commitment and respect, for Plan A.

In music specifically, 2013 has been a year unlike any other in recent memory. It’s been a year that has seen musicians stand up and speak out on behalf of their profession like never before. And the results have been historic. Internet radio giant Pandora has announced it’s abandoning its pursuit of legislation that would lower artists’ royalties. Congress is now taking another look at copyright reform. Spotify has responded to broad criticism and made their operations more transparent. And perhaps most significant, music lovers are now standing with music makers to help push these issues forward.

For the first time in a long time, there’s a lot to be hopeful about if you’re a musician. There are tremendous fights ahead, against powerful forces, on many fronts. But we have something those forces don’t have. We have something worth fighting for.

A few weeks after that career day, one of the students who’d attended came to a concert of mine in New York City, accompanied by her mother. She found me after the show, and proudly handed me her newly-completed five-song CD. She said, “I wanted you to know that I’m going for it. I’m going to do it.” And smiling tearfully, her mother added, “Yes. We’re going to do it.”

I deeply admire and respect that young artist. And her mother, for standing with her.

My New Year’s resolution is to stand up more, and speak more.

I respect my profession. I respect artists.