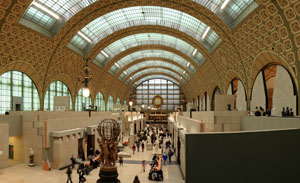 I love sitting in studio classes, experiencing that unique relationship between a master teacher and a student. It always feels like a privilege to hear and see the trust that has been generated and to feel the intensity of the learning and teaching model. One of our very distinguished string faculty, who has an x-ray like vision into the working of the technical and musical preparation of her students, has a particular question I have often heard her ask. She listens with great intensity, her head moving from side to side as though trying to catch every nuance, her chin down, and eyes looking up and around as the student plays.

Then she fires the question: “Did you mean to do that?”

It is such an amazing question to analyze. Just think of all the practice that has gone into preparing for the lesson, the desire to improve, to impress, to develop artistically. And then this laser-like question which is so profound, so philosophical, so existential. Do we really mean the actions we take? Have we thought about them? If life is a conscious act, which I think it is, do we act thoughtlessly in its execution? Do we play music without truly hearing ourselves, focusing only on…well what? Technique? Making an impression? Making art our servant? This thought was in my mind during a recent and oft made visit to the Musee d’Orsay in Paris (in photo left), that extraordinary museum converted from an actual 19th century railway station in the 1970s, a project only the French could really envision and then pull off with such panache. It is truly one of my favorite museums in the world and is far more pleasurable than the sprawling Louvre just across the city. During this particular visit, there was a special exhibition devoted to Degas, one of the founders of Impressionism, a great artist who was continually inspired by dancers, painting them throughout his life. We paused in front of one of Degas’ most glorious pictures of a dancing class led by an elegantly dressed dancing master with cane and beard. Nearby, I observed a young student artist. She was studying the picture intently and attempting to copy it exactly onto her canvas with brush and paint. The juxtaposition of images was amazing. On the one hand, the original, a grand masterpiece of color, form, and design. On the other hand, the student copy. And it was shocking what had become of Degas’ work in the reproduction. This young artist was certainly talented, had a wonderfully fluent technique, and had captured the pictures exactly but… had turned the great Impressionist work into a piece of kitsch. The figures had become superficial, shapeless within their exact shape; the picture had lost its structural coherence and the composition its meaning. Someone once said that kitsch happens where art loses its edge. And here it had happened with the tiniest changes in brush stroke, the minutest moves in form, the subtlest nuances of color. The image stayed with me on a visit to Buenos Aires in Argentina where my wife and I dared to dance the tango, that most important improvisational, existential dance of all time. We went to a tourist show and were presented with a glitter of tango virtuosi, each dancing couple precisely choreographed, their feet and legs inter twining, bodies twirling in an impressionistic blur of colors. Truly amazing. Skillful. Energetic. And totally dull. The technique had subsumed the meaning of the dance and rendered it a tourist experience. How strange. It was not what we expected.

But the following night we found a tango club. No glitter. Quite old, with huge mirrors from the 1920s, and wood floors stained by the best Malbec, and an atmosphere throbbing with the spirit of tango. The dancers (and they were just ordinary people, no one was a professional) had arrived either as couples, or groups, or singly, but something was so very clear. They were there to dance the tango and to be subsumed in its slow sensuous pleasure. To watch the dance begin is to witness a spiritual act. The dancers (and they were all ages, from 30-80) did not look at one another, instead they felt. There was a ritual to the dance. The invitation made and accepted immediately. Couples standing together. Not moving. Allowing the music’s pulse to become the now. Then it begins. At first leaning gently into one another like a gesture of giving. Then the man would take the lead and his improvisations would carry the woman away in many directions while enabling her improvisations in the form of ornaments and arabesques. And, my word, was this deeply felt. This was not dull, this was truly authentic, truly tango. Degas should have painted this scene, for his art would most surely have caught the art of this dance.

Such impressions stayed with me in Granada, Spain where we went to the obligatory “flamenco” evening in a “cave” late at night. Two guitarists, a female singer whose vibrato was so wide you could have flown a F14 jet through, and dancers who deafened us with their stomping. We put the experience down to being a tourist, and the sort of thing one must do! But where was the “Duende,” the “Deep Song” that Lorca, the greatest Spanish poet of the 20th century wrote about with such extraordinary words in the 1930s?

It is deep, truly deep, more so than any well, more so than all the seas that bathe the world, deeper than the present spirit that creates it or the voice that sings it, because it is well nigh infinite. It arises from remote peoples, traversing the graveyard of the years, and the fronds of parched winds. It comes from the first cry and the first kiss. Our wish to enter Lorca’s world was granted quite by chance at a small restaurant out of the reach of tourists where a private concert was given to a select audience by a young beautiful singer and one inspired, entranced guitarist. The music floated through the cypress trees, orange groves and myrtle, and became part of the glory of the night and the beauty of existence. I hope Lorca could hear from his unmarked grave, not far from our restaurant, because this was singing from the soles of the feet as though for the last time.

The performing arts are the cruelest of all mistresses. They demand and consume talent and souls. Audiences, unaware of the sacrifices of the artist, nevertheless want more, always hungering for the performance that evokes the infinite. But what on earth takes us to this point where we mean everything we do in the most transcendent way?

The foundations can be put in place with great teaching and learning — with the learning often bearing fruit only years after the teaching. Then, in the case of a musician, all the essentials coalesce — projection, tone, phrasing, technique, character, style, color, rhythm, blending, singing — to create this cauldron which ignites into deep insight and improvisation and passion. The audience becomes very much an element in this blaze, for we need listeners to act as the catalyst for meaning.

Our string faculty’s fatal question — “Did you mean to do that?” — was really so simple. Perhaps its depth and seriousness are contained in the use of the word “mean.” “Mean” in the sense of intent, “mean” in the sense of delving into the deeper realities. The meaning of a Degas painting may well elude the mind and technique of a young artist without life’s experience. And she ends by making a soul-less parody of that meaning. Sometimes, sadly, artists, even mature ones, never move beyond the superficialities, never question what it is they mean to do or express. How many performances have we heard which are just like that? Conversely, how many have we heard and seen that would fit into Lorca’s world and description? Of course we remember every one of them as though they were burnt into our minds.

It is that questioning, that delving into intentions, that commitment to the “Deep Song” of our art that I would profoundly encourage in our students as they begin a new school year. And I would hope it would be a quest they would pursue throughout their artistic lives, a pursuit that would nourish both their souls and those of their listeners.