How We Spent Our Summer Vacation

Even though the fall semester is underway at the Eastman School of Music, the ESM horns wanted to share how we spent the summer of 2013:

This summer, Lucy Olson worked at the Haddonfield, NJ, after-school program before traveling to Aspen, CO, for eight weeks to attend the Aspen Music Festival.  She enjoyed playing in the orchestras, performing in a woodwind quintet, studying with Andrew Bain and David Wakefield, hiking, and trying to breathe in high altitude.  After a relaxing three days at home in New Jersey, Lucy returned to Rochester, looking forward to a great senior year.

Chelsea Nelson attended KBHC for week one with Abby Black! As well as the Pierre Monteux School for Conductors and Orchestra musicians in Hancock, ME for six weeks where I played 60 orchestra pieces in six weeks and enjoyed the beautiful scenery that the coast of Maine has to offer; including hiking at Acadia National Park and swimming in the ocean! 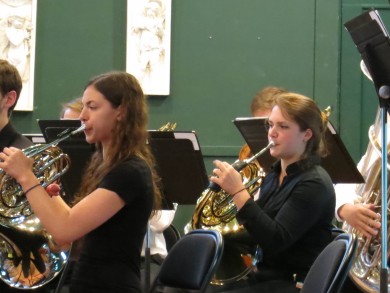 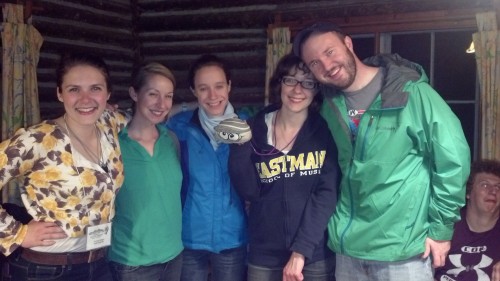 Daniel Brottman started his summer with the Eastman Wind Ensemble trip to Toronto, along with Lauren Becker, Russell Rybicki, Claude Lumley, and Kelly Suthers. After returning, he headed to Lake Dunmore, Vermont, for the New Music on the Point festival, where he participated as a composer. Here he met the wonderful players in ICE (International Contemporary Ensemble) and many other fine musicians. After attending his brother’s wedding in Chicago, Daniel flew straight to Maine, for the Bar Harbor Brass week, along with Grace Shafer, and many faculty from the Philadelphia Orchestra. After this, 3 weeks were spent practicing and relaxing in Rochester, followed by 3 weeks in Orford, Canada, for the Orford Music Festival. After learning how to say very little in French but very much about playing Tchaikovsky in an orchestra, Daniel returned home and is excited for his degree recital and senior year. 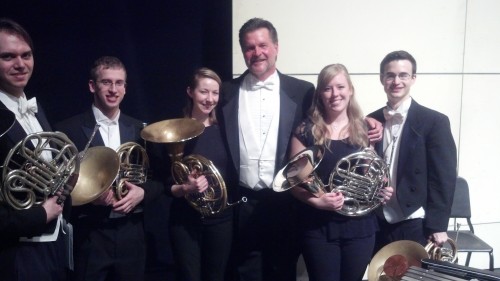 Grace Shafer spent the month of June doing festivals in Arkansas and Maine. She attended the Hot Springs Music Festival, where she got to experience playing great orchestral and chamber music and was mentored by the principle horn of Memphis, Samuel Compton. She then traveled to Bar Harbor Brass Week, where she studied with Adam Unsworth and had a blast playing the Bach-themed transcriptions for brass (talk about a lot of notes!). Grace spent the rest of her summer nannying, taking road trips to Rochester, West Virginia, Pittsburgh, and Virginia for various reasons, and preparing for her end-of-summer recital. Early this summer I spent some time doing an unpaid internship at Twin Village Music, in my hometown of Lancaster, NY, where I learned the ins and outs of the music business, the buying and renting of musical instruments, and most importantly how to fix instruments.  I was only permitted to watch the fixing of brass instruments, but I was up to my elbows in slime cleaning trumpets and horns, and even got to take apart flutes and clarinets.   In July I spent a week in sunny North Carolina with my whole extended family for a big reunion before I was sent off to school.  Later on in July I performed the Concertpiece for Horn by Saint-Saëns with my community band. In August I spent a lot of time practicing, saying some last goodbyes to my town and to my loved ones, and finally hit the road for Eastman.

I spent my summer studying, practicing, and taking courses: Stravinsky, His Debts and Debtors, and Theory 401! I also competed in the International Horn Competition in Louisville, a great experience. I also am very excited to have two pieces of artwork accepted to the Bridge Gallery at The Strong Memorial Hospital! Looking forward to a great year, several recitals, and some awesome ensemble rep!

This summer, Russell Rybicki and his wind quintet, The Midic Winds, were invited to compete in the Fischoff Chamber Music Competition. They performed John Harbison’s Quintet for Winds, Theodor Blumer’s Wind Quintet, Henri Tomasi’s Cinq Danses, and Samuel Barber’s Summer Music well enough to advance all the way to finals and win the bronze medal in the senior wind division and $2,000. 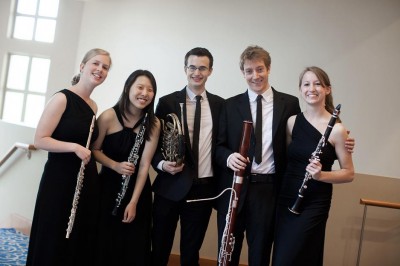 After that, Russell toured to Toronto with the Eastman Wind Ensemble to perform at CanadaFest. He then walked at graduation even though he will be completing his 2 degrees by December 2013. After graduation, he was asked to perform Stravinsky’s Rite of Spring with the Rochester Philharmonic. Getting to play Wagner tuba was a riot! He then immediately left for the National Orchestral Institute at the University of Maryland in College Park, MD. There he worked with renowned artists and teachers Gail Williams and William VerMeulen. He made some great horn and other friends performing Stravinsky’s Pulcinella Suite, Strauss’ Ein Heldenleben, Mahler’s Sixth Symphony, and one of Russell’s favorite pieces of all time, Schoenberg’s Chamber Symphony No. 1.

After NOI, he drove back to Rochester and moved into his new apartment, practiced, and biked to the gym regularly. At the end of August, he made a trip home to Austin, TX where he visited his family and took a trip to Houston to work with Mr. VerMeulen at Rice. He then returned to Rochester to prepare for his final semester to student teach. He is very excited to work with beginning band students and some high school band students. He is not very excited to have to wake up early every morning, but it will be worth it in the end! 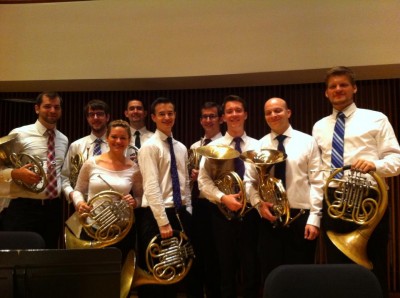 Russell and the horns at NOI. ESM alumni Matt Gray is also pictured.

Emily Tyler (Duffy), a senior, married Sterling Tyler (BM ’13, Viola Performance) in June. Many of their Eastman friends were part of the bridal party. 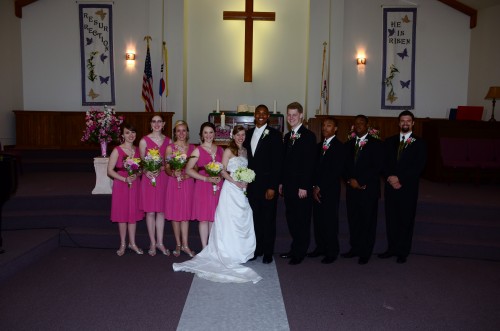 Emily and Sterling Tyler with their bridal party

This summer, freshman Nikki Labonte received the incredible opportunity to perform as a member of the National Youth Orchestra of the United States of America.   Sponsored by Carnegie Hall, this was the inaugural year of the orchestra which was composed of 120 young musicians from across the country, conducted by Valery Gergiev and accompanied by soloist Joshua Bell.   The program began with a two week residency at Purchase College in New York.   Here, the orchestra was led by James Ross, world-renowned conductor and horn player, and the horn section was coached by William VerMuelen, principal horn of the Houston Symphony and Horn Professor at Rice University.   Shortly after, Valery Gergiev and Joshua Bell arrived and Gergiev wasted no time in enforcing the subtleties and beautiful intricacies of Shostakovich’s Tenth Symphony.  After a premiere concert at Purchase College, the orchestra traveled to Washington D.C. to perform at the Kennedy Center to a sold out crowd.  From there, the tour went international and the musicians traveled to Moscow and St. Petersburg performing in the Moscow Conservatory and Mariinsky II Theater respectively.  Finally, after an amazing journey, the tour closed with a sold out performance at the BBC Proms at Royal Albert Hall.  This was truly an unforgettable and life-altering experience for Nikki.  She was blown away by the immense talent of the orchestra and was so fortunate to be able to collaborate with so many wonderful players and people.   It will certainly be an experience that she will carry with her for the rest of her life. 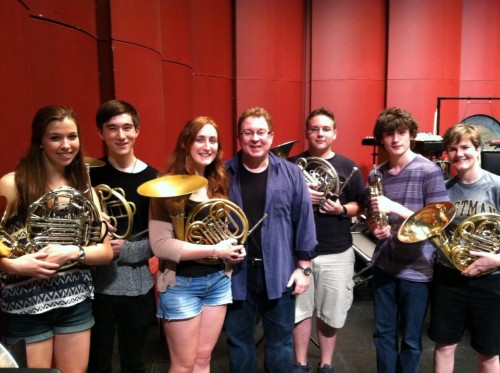 I was a member of the Siena Music Festival for five weeks in Siena Italy. I got to play with musicians from prestigious orchestras and schools in orchestral chamber and operatic works such as Cedrillon, The Wagner Ring Cycle, Pines of Rome, Strauss Serenade, and more. 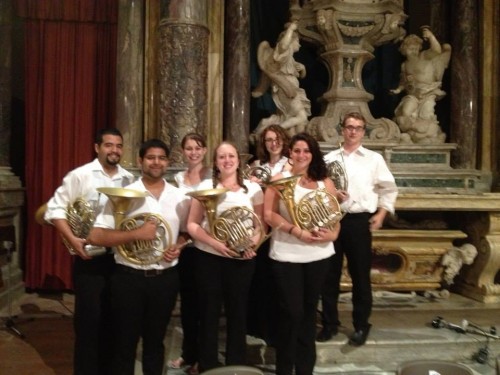 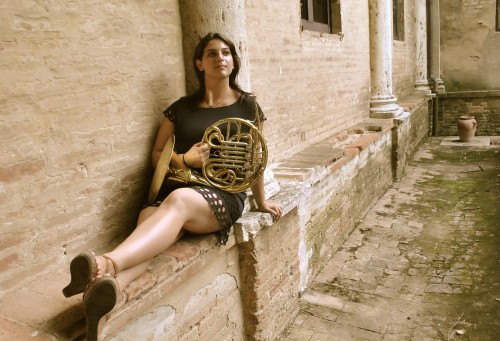 DMA student Lauren Becker spent the month of June working as a staff member at Kendall Betts Horn Camp in New Hampshire. Later in the summer she headed to Oneonta, NY to teach the third session of the New York Summer Music Festival. She was fortunate to have sophomore hornist Kayleigh Cook as one of her counselors, and had a wonderful time teaching the fourteen NYSMF hornists, coaching a brass quintet, and performing in the faculty recital. Lauren then traveled to France where she took in the beautiful scenery of Brittany and Normandy, marveled at monuments and works of art in Paris, and delighted in French bread, pastries, and cheese! 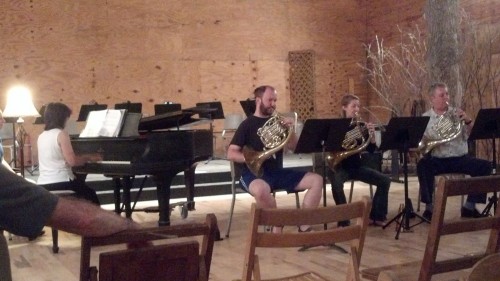