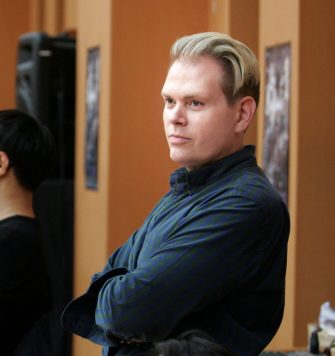 This season, stage director Stephen Carr returns to South Korea for Tosca with the Seoul Philharmonic Orchestra, under the baton of Maestro John Fiore and starring Jenifer Rowley, Massimo Giordano, and Lucio Gallo. His 2019 production of La Bohème for Daejeon Arts Center was hailed by Auditorium as “A significant milestone… A futuristic staging that remains grounded in realism, bringing both a new sense of intimacy and a surprising freshness to the piece. It breathes new vitality into this well-known storyline.”

At Eastman, he has directed recent productions of Der Kaiser von Atlantis, Mahagonny Songspiel, She Loves Me, Albert Herring, Suor Angelica, Mese Mariano, The Turn of the Screw, Orfeo ed Euridice, Don Giovanni, The Light in the Piazza, L’Incoronazione di Poppea, and Into the Fire, a collection of the chamber works of Jake Heggie, programmed in collaboration with the composer. His Eastman production of Poulenc’s Dialogues of the Carmelites was awarded the 2015 American Prize for Stage Directing.

As a member of Actor’s Equity, Carr’s performing credits have included New York, regional, and international productions of Ragtime, Cabaret (London), Jesus Christ Superstar (European Tour), and The Scarlet Pimpernel, as well as numerous solo cabaret and concert hall performances throughout the Tokyo metropolitan area. Carr is a graduate of the Eastman School of Music (BM Voice, MM Stage Directing), The Royal Academy of Music in London (PGD Musical Theatre, LRAM), and the Washington National Opera’s Domingo-Cafritz Young Artist Program. He has served on the faculty of the Interlochen Arts Institute, and is currently a Visiting Professor at the Senzoku Gakuen Conservatory in Tokyo, where he helped create what has now become one of the most successful undergraduate musical theatre training programs in Asia.