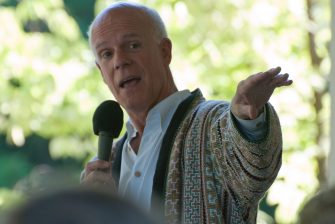 The name Jay Stetzer is a familiar fixture on the Rochester stage and radio broadcasting scene.  He performs regularly in the area as a solo artist, and he can often be found sharing the stage with the Rochester Philharmonic Orchestra. He is the creative voice behind the “Tales in Two Minutes” that have been delighting and inspiring listeners daily since 1987 on WXXI-FM (91.5) and North Coast Radio (105.9).

A popular storyteller throughout the US, Jay has given countless performances at fairs, festivals, schools, colleges, and conferences, and has appeared frequently on radio and television. He has been a performing member of Young Audiences since 1983 and was elected as a finalist for their “Artist of the Year” award in 1988. He appears regularly with orchestras throughout the U.S.

Jay has five storytelling CDs to his credit: “Fables in Four Minutes,” (a Parents’ Choice Approval Award winner in 1992 and Best of the Best Award from the International Librarian), “World Full of Stories,” (a Parents’ Choice Silver Honor Award winner in 2005), “Parking in Manhattan,” (a delightful collection of urban legends), “The Fantabulous Cumulo-Nimbuli Pump,” (a homage to Dr. Seuss), and “Five O’clock at the Zoo,” (an hysterical personal history).

Jay makes his home in Rochester with his wife, Maura, and their beloved hound, Billy.  He is no stranger to children, being himself an active father of five and four grandchildren. He is also an emeritus artist-in-resident at the esteemed Harley School, where he inaugurated a unique program of performing arts for children in the elementary grades since 1971.