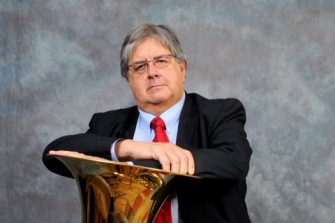 Don Harry became the tubaist of the Oklahoma City Symphony in 1972 and joined the Buffalo Philharmonic as principal tuba in 1973. From 1977 through 1988, he served as the tuba instructor at the Juilliard School of Music in New York City.  In 1983 and 1984, he also served as the principal tuba and teacher at the Eastern Music Festival in North Carolina.  From 1995 through 1997, Mr. Harry was the tuba instructor at Baldwin-Wallace Conservatory.  In 1990 he became a member of the Eastman Brass, and in 1996 joined the Eastman School of Music faculty where he is Associate Professor of Tuba.

Recent performances and appearances include the Winter Festival of Campos de Jordao, Brazil for two summers; a Composers Workshop with the Lawton (OK) Philharmonic; master classes at North Texas State University, Rice University, Miami University (OH), and the Lucerne Festival (NY).  In the 2012-2013 season, he will play the John Williams Concerto with the Buffalo Philharmonic, the Hindemith Sonata with the Eastman Wind Orchestra , a faculty recital at Eastman, and several other recitals.

Don Harry is a member of the Delaware Nation and President of Neto Hatinakwe Onkwehowe, Inc. (see netobuffalo.org),  a Native American Arts group in Buffalo, New York. He recently presented an exhibit about the Riverside Indian School of Anadarko Oklahoma and John Kuhn, Assiniboin Tubaist, titled “Tribalism and Transition”.