Video-conferencing over Internet2 has been offered at the Eastman School for over ten years, thanks to the University of Rochester’s participation in the Internet2 consortium, and high speed connection to NYSERNet. 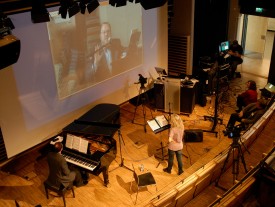 This means that faculty and students can connect and communicate with their peers all around the world, with high bandwidth CD quality audio and DVD/HD quality video, participating in performance master classes, concerts, academic symposia, and conferences.

The most popular technologies used for these events are proprietary video-conference systems such as those by Polycom, Tandberg, Sony, LifeSize and Cisco.  We have a mobile Polycom HDX8000 with dual screens and Music Mode, and capable of hosting simultaneous connections to three other remote sites. 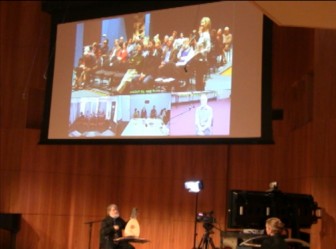 The Polycom system has been used to broadcast live to the Canberra Early Music Festival at the Australian National University, and bring the Royal College of Music in London, Hull University in Yorkshire, and Boston University together for an all day Chopin Symposium, both from Hatch Recital Hall.  It was also used to receive the organ inauguration concert from the Royal Danish Academy of Music in Copenhagen in Schmitt Organ Recital Hall, and to present to audiences in four continents in a Distance Learning Conference from the Eastman East Wing control room. 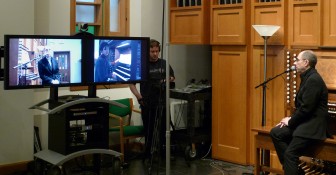 Another mobile solution features software-based solutions such as Conference XP, DVTS (Digital Transport Video System) and EchoDamp.  This has been used in master classes with the Norwegian Academy of Music in Oslo for voice, horn, double bass, and percussion, and with the New World Symphony.  This technology can enable uncompressed audio and video to be sent at speeds of up to 30Mbps in each direction. 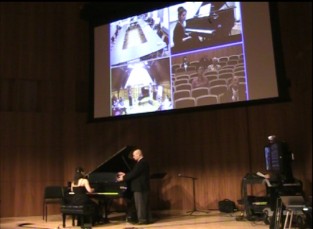 These technologies have most recently been used in a series of Internet2 showcases, one promoted by Skidmore College, and another by JANET, the UK’s research and education network, with the London Symphony Orchestra and Royal College of Music, for the UK Arts and Humanities community.

The latest Internet2 technology being researched and tested is LoLa, Low Latency audio and video which enables real-time simultaneous performance between remote venues.