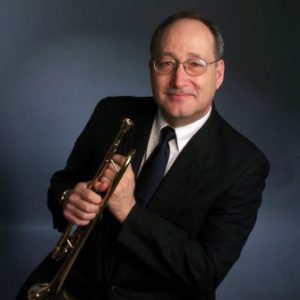 James Thompson is Professor of Trumpet at the renowned Eastman School of Music. He came to this position having played Principal Trumpet in the Atlanta Symphony Orchestra since September 1990. He has held corresponding positions with the Phoenix Symphony, the Orchestra of the State of Mexico, the National Symphony of Mexico, and for 14 years, the Montreal Symphony Orchestra. He is in addition currently Solo trumpet of the Orchestra Toscanini under the direction of Loren Mazel. Born in Frankfurt, Germany, he was raised in Phoenix, Arizona where he began trumpet studies at the age of ten. His principal teachers included Richard Longfield and Roger Voisin.

Mr. Thompson has been active both as a soloist and a teacher. He has taught trumpet and Brass Ensemble at Northern Arizona University, the National Conservatory of Music in Mexico City, and McGill University in Montreal, Canada. He has also performed as soloist with orchestras in North and South America as well as Europe. In 1979 he competed in the first Maurice Andre International Trumpet Competition and was a prizewinner. He has made recital tours to Japan, Australia Canada, Spain, Germany, Sweden, Norway, and Latin America. He has also been a guest artist with the Summit Brass, a brass chamber ensemble made up of members from America¹s finest orchestras, and Chicago¹s Music of the Baroque. At the 1996 Atlanta Olympic Opening Ceremonies he was seen performing a jazz/gospel trumpet solo on television more than 3 billion people. In the last year he has performed as guest Principal Trumpet with the New York Philharmonic, the Los Angeles Philharmonic, as well as the Baltimore Symphony.

Mr. Thompson has also actively encouraged new compositions for the trumpet. In 1987 he performed the world premiere of Malcolm Forsyth¹s Concerto for Trumpet, which was written for him and the Montreal Symphony.

He has recorded this concerto with the Kitchener-Waterloo Orchestra for CBC Records in May 1992. In 1990 he performed the Quebec premier of Jacques Hetu¹s Trumpet Concerto, and in March of 1992 he gave the world premier of the Glenn Buhr Concerto for Trumpet, also written for him and the Montreal Symphony.

Mr. Thompson can be heard on London Decca recordings with the Montreal Symphony, and Telarc¹s Atlanta Symphony releases. He has also recorded on the Chandos Label in performances, which include, Vivaldi¹s Concerto for Two Trumpets, and the critically acclaimed Shostakovich Concerto #1 for Piano, Trumpet and Strings. In addition he has recorded with the Eastman Wind Ensemble new works for trumpet and Wind Ensemble entitled Danzon.