Steven is a woodwind educator and performer specializing primarily in saxophone, clarinet, and flute. He has been fortunate to collaborate with such luminaries as Terrell Stafford, Ed Calle, Chad Lefkowitz-Brown, Sean Jones, David Sanborn, and Wayne Bergeron at notable venues worldwide including Carnegie Hall and Dizzy’s Club in New York.

A second-year master’s student and teaching assistant at the Eastman School of Music, Steven transferred from Indiana University (IU) where he was also an associate instructor. There, he studied with saxophonists Greg Ward and Tom Walsh, and performed lead alto saxophone in IU’s premier jazz band under the direction of Brent Wallarab. As a band member, Steven had the opportunity to perform in Jazz at Lincoln Center’s inaugural Jack Rudin Jazz Championship where the band earned second place.

During his first semester pursuing a Bachelor of Music degree in Woodwind Performance at Brigham Young University (BYU), Steven was a winner of the School of Music’s concerto competition. Additionally, he also played lead alto saxophone in BYU’s premier jazz band, Synthesis, for four consecutive years. During that time, Synthesis won two Downbeat awards, performed at the annual Jazz Education Network (JEN) conference, and toured internationally in the Baltic states and the Caribbean. Steven also performed with BYU’s Wind Symphony in Australia and was a featured soloist with the group on a tour in Texas.

Steven’s drive as an artist is to inspire his community. Originally from Salt Lake City, Steven contributed to the Utah music scene by hosting a weekly jam session for local musicians, maintaining a teaching pool of private students, and performing in Caleb Chapman’s award-winning Soundhouse bands. He was an active participant in the studio of the renowned Utah saxophonist Dr. Ray Smith throughout his high school and undergraduate years. 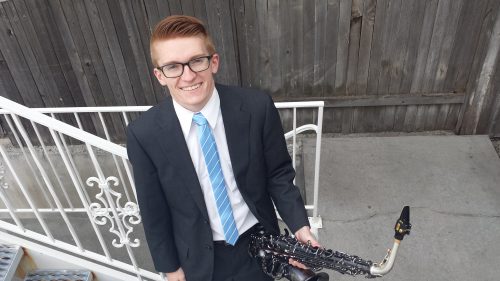