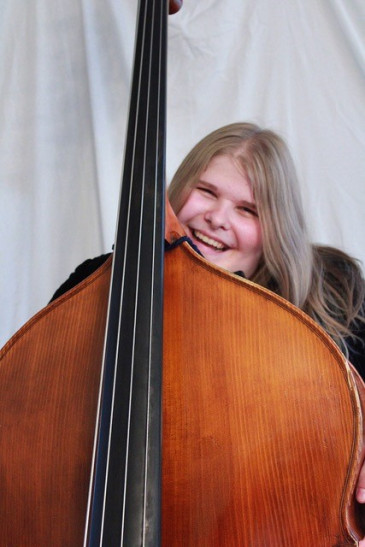 Payton Dziekan is a double bassist and educator based in Rochester, New York, and is dedicated to accessibility and justice in the arts.

As a chamber musician, Payton has performed Jon Grier’s Significant Others with violist Kathryn Dey at the South Carolina Governor’s School for the Arts and Humanities, and Schubert’s Quintet in A Major, D.667 at the Kennedy Center’s Millennium Stage. Payton also frequently performs as a mezzo-soprano, and was most recently featured as a soloist in Part I of Handel’s Messiah at Saint Paul’s Episcopal Church in Rochester.

Payton’s work as an educator has spanned many realms. Most recently, Payton had the opportunity to collaborate with Mrs. Elana Herman and the Philharmonia Orchestra at School of the Arts (SOTA), a public secondary school in the Rochester City School District. She has served on the faculty of ROCMusic Collaborative, an El Sistema-style nonprofit organization serving students in the city of Rochester. During her time there, Payton taught individual applied voice lessons and assisted with double bass lessons. She has also served as a program assistant and instructor of double bass at the South Carolina Governor’s School for the Arts and Humanities’ Summer Odyssey program, and as a staff alto at Saint Paul’s Episcopal Church and First Presbyterian Church in Greenville, SC.

Payton is a recent graduate of the Eastman School of Music in Rochester, NY, where she received bachelor’s degrees in Double Bass Performance (with renowned double bassist James VanDemark) and expects to complete her degree in K-12 Instrumental Music Education this December. Payton has studied with Owen Lee, principal bassist of the Cincinnati Symphony Orchestra; Curtis Burris, bassist in the Philadelphia and National Symphony Orchestras; and Charlie Nilles, bassist in the National Symphony Orchestra. Payton has performed in masterclasses for notable bassists including Kurt Muroki, Tracy Rowell, Marco Panascia, Craig Butterfield, Jeffery Weisner, and Robert Oppelt.

In her spare time, Payton is an avid connoisseur of iced coffee, ‘70s folk, and funky socks. She
loves to spend time in nature and with her close friends and family