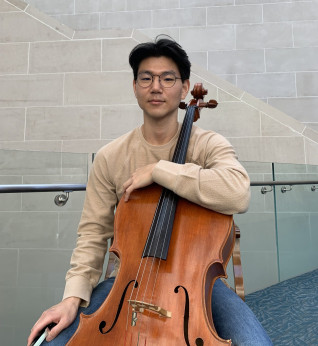 Patrick Baek is a Korean American cellist studying with Steven Doane and Rosemary Elliott at the Eastman School of Music. Baek has appeared in masterclasses with Antonio Meneses, Paul Katz, Paul Watkins, Beiliang Zhu and among others. He has appeared at festivals including Heifetz International Music Institute, Bowdoin International Music Festival and the Music Academy of the West. He was recently awarded third prize at the MTNA National Final in the Young Artist category. Baek has served as principal for the Eastman School Symphony Orchestra and Eastman Philharmonia. Baek has also been selected to perform in the Eastman School of Music’s Honors and Intensive Chamber program numerous times. Baek attended the Eastman School of Music for his undergraduate and is currently continuing his Masters of Music there where he was awarded the Performer’s Certificate, which recognizes an individual’s outstanding performing abilities.