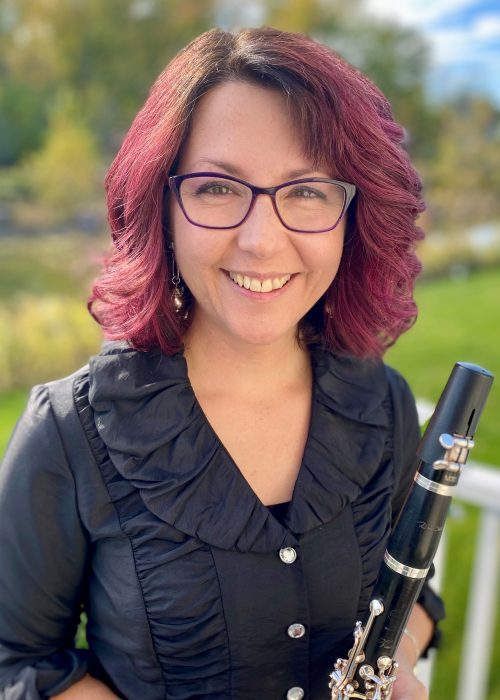 Clarinetist Marcy D. Bacon joined the faculty of ECMS in 2021, where she teaches applied clarinet and is excited to be directing the clarinet choir. She has been on faculty at Nazareth College of Rochester since 2008, where she teaches applied clarinet, clarinet techniques, and performs with the Wilmot Wind Quintet. Marcy is the clarinetist for modern chamber music group fivebyfive, which recently won a Chamber Music America commissioning grant and was featured this past year on two national broadcasts of the radio program, Performance Today, as well as the Rochester Fringe Festival (2017-present), WXXI’s Backstage Pass (2018), WXXI’s Live from Hochstein, and the cover of the Rochester City Newspaper (2019). Their debut album, Of and Between, will be released fall of 2021 through ArtistShare. She has played with the Rochester Chamber Orchestra, Rochester Oratorio Society Orchestra, Rochester Lyric Opera, the Western New York Chamber Orchestra, and ensemble.twenty.21. As a member of the flute/clarinet duo VocaSynth, she premiered Cylindrical Sea by Russell Scarbrough at the 2012 National Flute Association Convention in Las Vegas, NV.

Dr. Bacon holds a DMA in Performance and Literature from the Eastman School of Music, an MM from Michigan State University, and a BM from Portland State University in Portland, Oregon.  She has presented sessions on wind quintet literature with her Wilmot Wind Quintet colleagues at the New York State School Music Association (NYSSMA) Winter Conference and the NAfME All-Eastern Conference. She has also presented sessions on the topic of audiation as it pertains to both early childhood and instrumental applications of Gordon Music Learning Theory at the NYSSMA Winter and Summer conferences.  Marcy holds Early Childhood and General Music Level I Certifications from the Gordon Institute for Music Learning (GIML) and has served as the historian for GIML National. Additionally, Marcy is a founding member of the New York State Chapter of GIML (NY-GIML) where she currently serves as Treasurer. Prior to joining the faculty at Nazareth, Dr. Bacon held positions in applied clarinet and clarinet methods at SUNY Fredonia for seven years and taught at the Hochstein School for 13 years. Dr. Bacon lives in Chili, NY with her husband, 12-year-old son, and two black cats.