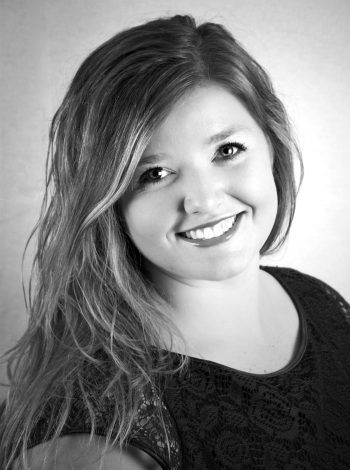 Soprano Hannah Harrow, a native of Rochester, NY, has been praised for her “brightness, enthusiasm and directness” (Graham Johnson), as well as her “vocal strength” and “radiant expression” (The Lake Placid News). She received her BM (’15) and MM (’18) in Vocal Performance from the Eastman School of Music in the studio of Robert Swensen, and recently began her Doctoral studies in the studio of Kathryn Cowdrick. She grew up taking voice and piano lessons at the Eastman Community Music School, studying with Jane-Gunther McCoy and Alla Kuznetsov.

Hannah’s notable roles with the Eastman Opera Theater include the comedic step-sister Noemie in Massenet’s Cendrillon, and the gossipy Miss Pinkerton in Menotti’s The Old Maid and the Thief. She will make her debut as Donna Elvira in Mozart’s Don Giovanni at the Estates Theater in Prague in the summer of 2019. She covered Donna Elvira in EOT’s 2019 production of Don Giovanni, Suor Angelica in Puccini’s Suor Angelica, and Carmela in Umberto’s Mese Mariano. She worked with Jake Heggie and Gene Sheer during EOT’s staged song cycle production Into The Fire, and has received the opportunity to coach a variety of repertoire with visiting artists Mira Zakai and Renee Fleming. In 2017, she won second prize in the Jessie Kneisel Lieder Competition, adjudicated by renowned collaborative pianist and scholar Graham Johnson. During the summers, Hannah regularly sings a variety of operatic, musical theater and concert repertoire with the Lake Placid Sinfonietta, and is a featured artist on their 100th Anniversary recording.

When she is not performing, Hannah enjoys teaching her large and enthusiastic studio of voice students at the Eastman Community Music School and working as a Teaching Assistant for the Eastman Voice and Opera Department. In 2018, she won the prestigious Teaching Assistant Prize for Excellence in Teaching at the Eastman School of Music. She has coached Musical Theater repertoire and scenes at the University of Rochester alongside Kim Kowalke, president of the Kurt Weill Foundation and a founder of the prestigious Lotte Lenya Vocal Competition. Her students have performed in University of Rochester’s elite acapella groups, sung lead roles in their high school musicals and local theater companies, attended summer festivals and placed in local competitions. Many of her students are continuing their vocal studies at colleges such as Eastman School of Music, NYU and Ithaca.

Hannah’s passion for singing and teaching has also lead her to prisons — including the infamous Rikers Island Correctional Facility in New York City, where she designed and directed a week-long music workshop for juvenile male inmates. Recently, Hannah accepted a position as coordinator of Eastman Pathways, a scholarship program serving Rochester City School District students.