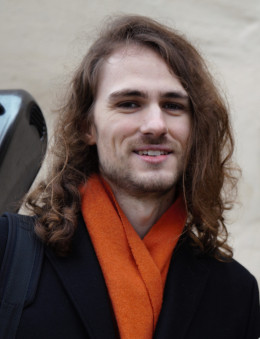 11. In 2012 he graduated from the music program at Lerum’s High School, with electric guitar as his main instrument. After high school he continued his music education at Helsjön Folkhögskola (2012-2013), receiving instruction in both jazz and classical guitar, and at Ljungskile Folkhögskola (2013-2015), where he studied classical guitar with Christer Brodén. In 2015 he enrolled at Luca School of Arts in Leuven, Belgium, studying classical guitar with Raphaella Smits, and earned the degree of Bachelor of Music in 2018. After his undergraduate studies in Belgium, Fredrik moved back to Sweden to perform with his guitar duo, Jernberg Åhrman Duo, and teach private lessons. During this time he gained experience performing, arranging and recording music, as well as teaching guitar to students of a wide range of backgrounds, ages, and skill levels. In 2021 he moved to Rochester, NY, to continue his music studies as a candidate for the degree of Master of Music at Eastman School of Music, in the studio of Nicholas Goluses. Fredrik currently holds a Teaching Assistantship at Eastman School of Music, and was awarded a Performer’s Certificate in spring of 2022.