Born in into a music-loving family in Henan, China, Yiou Li began her musical journey at the age of five. At the age of sixteen, Li made her concerto debut playing Rachmaninoff’s No.2 Piano Concerto under the baton of maestro Zhang Yi with the Hang Zhou Philharmonic Orchestra. Her performance was broadcast on the Music Channel (CCTV-15) of China Central Television. She was the prizewinner of many renowned piano competitions in the states. Including the 2013 Hilton Head International Young Artist Piano Competition in South Carolina. There, she performed with the Hilton Head Symphony Orchestra conducted by Maestro Chelsea Tipton. Li was the National Winner of 2014 MTNA Senior Competition in Chicago, Illinois. In 2017, Li won the first prize in the concerto competition at PianoTexas Academy & Festival in Fort Worth, Texas. This had also won her an opportunity to work with Maestro Leonard Slatkin. 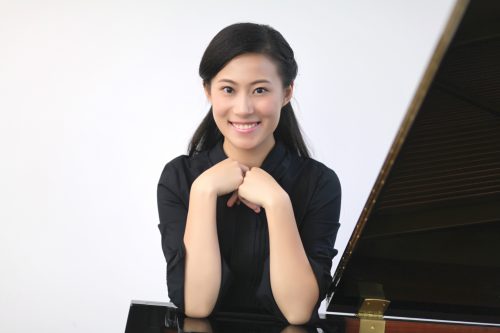 She has studied with Robert McDonald and Nelita True at the 2015 Banff Center; with Anton Nel and Fabio Bidini at the 2018 Aspen Music School and Festival. Other festival appearances include Rebecca Penneys Piano Festival, Gijon International Piano Festival, PianoTexas Academy & Festival and Seattle Piano Institute. She has benefited from the advice of many celebrated pedagogues, such as Alan Chow, James Giles, Vadym Kholodenko, Yong Hi Moon, John O’Conor, Boris Slutsky, Logan Skelton, and Zhe Tang.

As an avid collaborative musician and co-founder of The Morgan Trio, Li has performed in chamber master classes taught by the Brentano Quartet, Pacifica Quartet, the Ying Quartet, Kalichstein-Laredo-Robinson Trio, Donald Weilerstein, and Maestro Peter Oundjian. She has been selected multiple times to participate in Eastman’s Intensive Chamber Workshop and to perform in the Honors Chamber Concert.

Li is currently pursuing her Doctor of Musical Arts Degree under the tutelage of Professor Douglas Humpherys at the Eastman school of music, where she completed both B.M. (17) and M.M. (19) in Piano Performance and Literature. As a full-time teaching assistant of Eastman Class Piano, she enjoys teaching early to late intermediate level classes. She has taught private solo lessons in China over the years, and has served as piano instructor at 2018 P.A.L.S. and Roaring Fork Valley Music Lesson Program in Aspen, Colorado.